How can I find safety records for extreme sports in New Zealand?

All companies providing those services claim they are very safe and they do everything in their power for this, but some quick research shows that it's not 100% and deaths occur in different sports such as speedflying and paragliding.

How can I find the actual safety records of adventure sports and/or companies offering them in New Zealand? I'm especially interested in statistics for paragliding, skydiving and companies like U-Fly where non-pilots take control of a plane or even a helicopter.

New Zealand's National Incident Database might be of interest to you and a good place to start your search. It's a body of the Mountain Safety Council where incident data from "outdoor organisations" is collected and analysed in a standardised format.

It is a legal requirement for commercial and educational organisations to maintain an incident register.

But at the same time it appears that actually filing incidents with the NID is not mandatory. Nevertheless, if keeping records of incidents is required by law, I guess you could always enquire with the operator you're considering booking with.

Going back back to the NID... NID's most recent report (which, unfortunately, dates back to 2012) has got some figures and facts you may find interesting. To highlight a few (for the full context, be sure to consult the report): 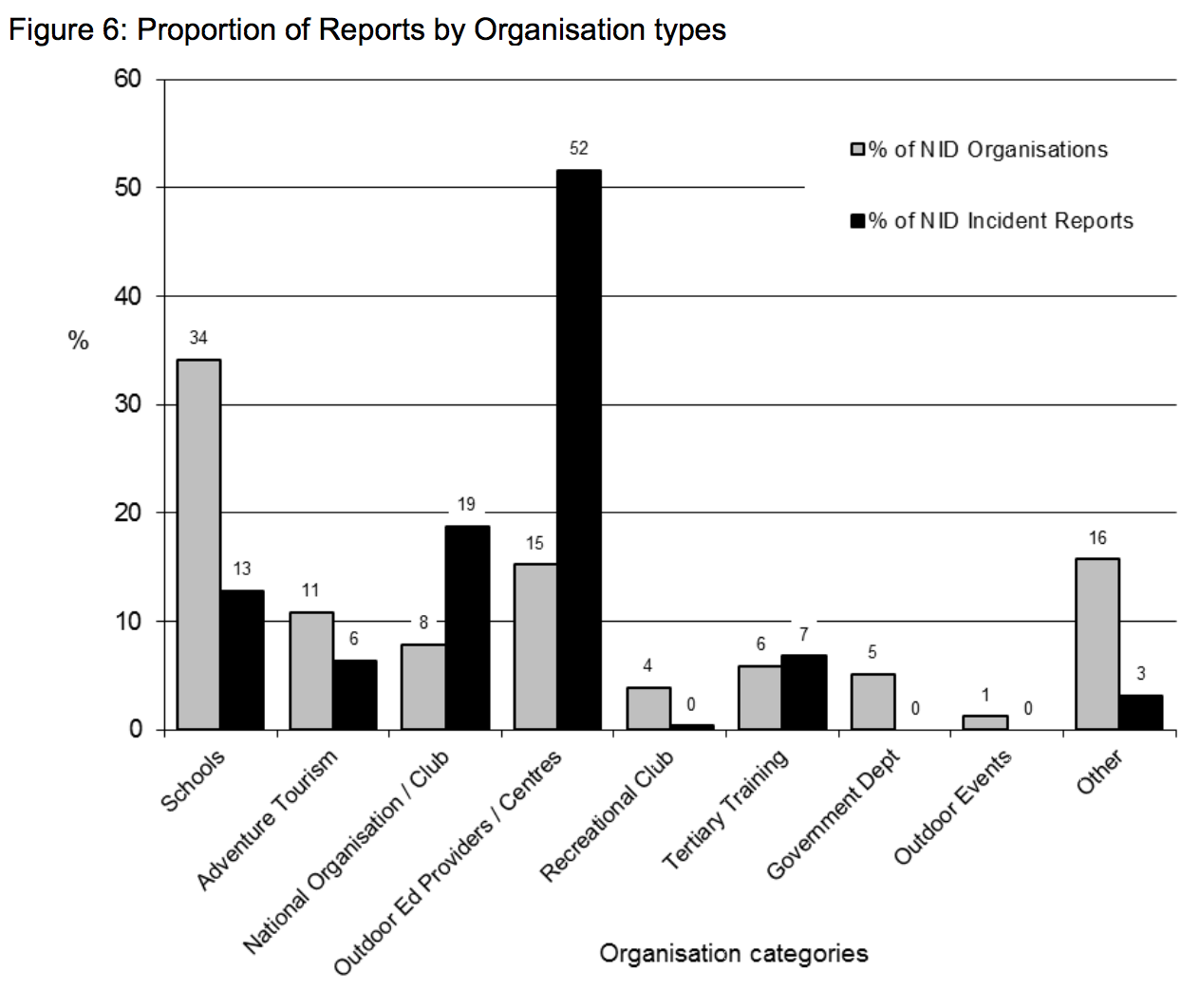 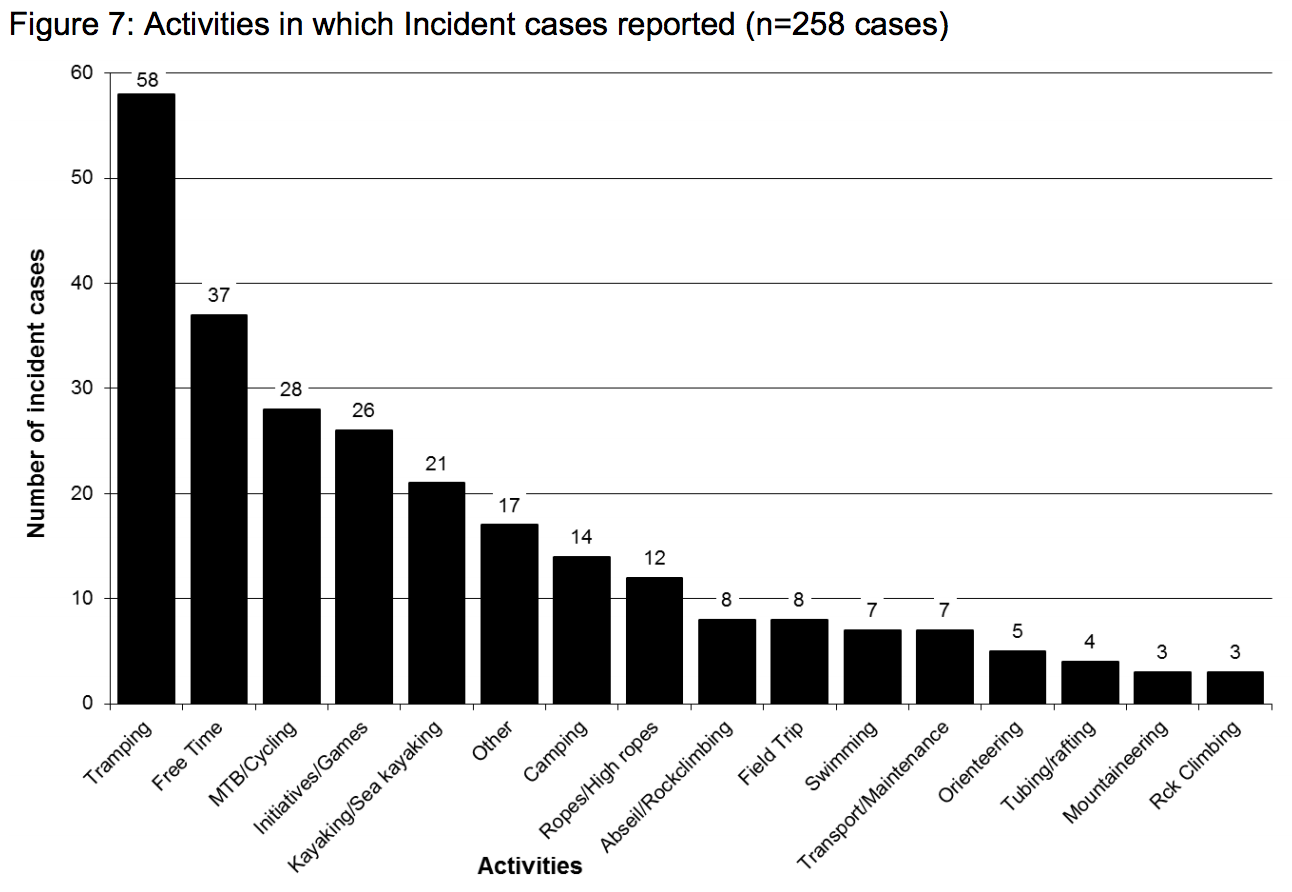 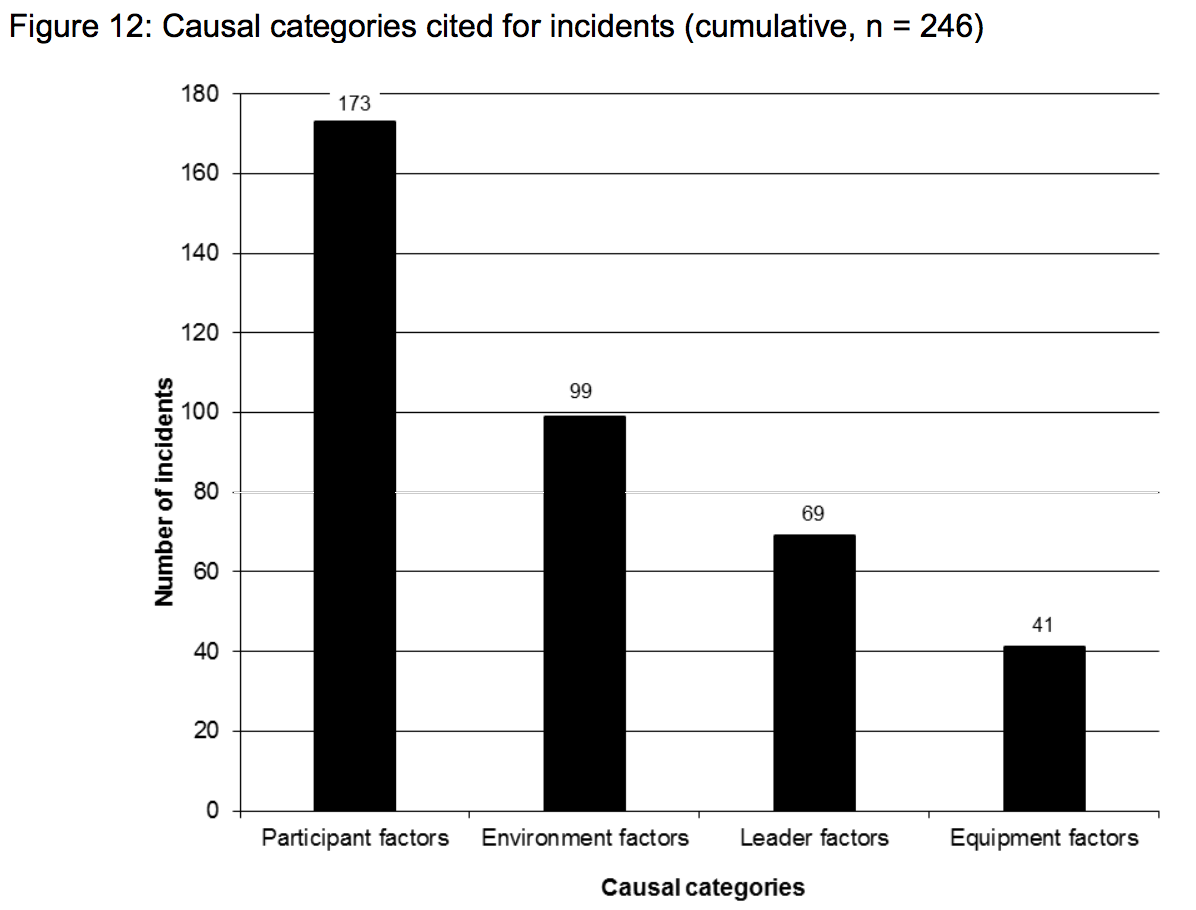 Most likely, things will have changed in the meantime (for the better, I'd like to think), but the number should still give you some idea of risk factors and activities.

Talking about risk, the Adventure tourism safety review, created following the death of a 21 year old British gear while river boarding in April 2008, contains a table outlining risk level vs control level for a number of adventure tourism activities. Amongst others, you'll find paragliding and microlight passenger flights listed in there.

(Source: Review of risk management and safety in the adventure and outdoor commercial sectors in New Zealand 2009/10, page 87)

Since you're specifically asking about U-Fly, I thought it'd be worth mentioning that about 3 years ago, I ended up giving a trial flight experience with Fly West (just north of Auckland) as a birthday present to my partner. She loved it and felt taken care after really well the whole experience. They even let her 'behind the wheel' during take off (the pilot can take over the controls at any point).

As a general recommendation, be sure to check out i.e. TripAdvisor and the likes to get a feeling for how well people liked a company and/or experience.

Finally, as a tip, you may want to swap out extreme sports for adventure tourism in further research. The latter appears to be the umbrella under which the former can generally be found.

Here's an anecdotal - citizen's-eye-view to complement MH's superb statistics based answer. NZ is very safe for adventure sports, compared to the international norm.

I'm a New Zealander - I live in Auckland. I'm not an adventure-sports type but have had enough NZ outdoor experience to get a bit closer to dying a few times than is comfortable. That was all "informal" where you set your own limits.

For organised commercial adventure sports our compulsory safety standards for adventure sports companies are probably as good as any in the world and are generally well enforced and obeyed. We kill a few tourists each year. In most cases death is unlikely but not too surprising.

Let's start with the best news. I do not recall a U-Fly activity ever killing anyone - I've even had a crack at "flying" a Robinson R22 - agh, wow - no, I'm not a natural. Every now and then we loose charter ski planes or sight seeing planes or helicopters. Rate varies and it can be several a year or some years between. Reasons vary and improvements get made. Regulations are good, enforcement is good, people largely understand what's required, and/but you still get a steady trickle due to happenstance. I'd trust our small commercial aircraft as much as in any country in the world.

Bungy jumping is remarkably safe considering - minimal numbers have died in the many decades since "we" (aka A J Hackett) reinvented it. It has happened but almost all such reports I hear of are from overseas. (But, I long ago put it on my "unnecessary if I want to live to 120" list).

Jet boating is usually far safer than it feels - we had one major accident with several deaths quite a while ago (10+ years?) which makes it safer than ever. |

Just trekking / hiking in our "high country" can kill you if you do not heed advice. Willingness to turn back when it gets too bad is highly desirable. Our premium tourist mountain walk is "The Tongariro Crossing". People die there of exposure very occasionally (maybe 1 or 2 every 5+ years). I in a group of 4 tried quite hard on one occasion on a day when on the plains below it was bright sunshine with blue skies. On the mountain it was 100 kph horizontal winds, not much above freezing point, and total whiteout - add to that steep fall off ridges (you could go down but the temptation is not to). We had excellent gear - without it deatah would not have been too surprising.

3 tourists died very recently in an avalanche on a high altitude track - it was exceeding unlucky as it was extremely narrow, they were on a dirt track and I'm amazed it took all 3 down with it - probably roped but ... .

"Real" climbers fall off our mountains at a predictably unpredictable rate. We probably kill "a few mountaineers" most years BUT that's part of being a mountaineer on real mountains.

Skydiving deaths have happened but very rare - years apart. We lost a whole planeload on takeoff within the last 5 years. I did not follow the details but it seems likely it was enthusiastic overload as a staff treat and flying out of ground effect or load imbalance. Such things are very very sad BUT again, it makes it a lot safer for years to come for those who come after. We have had a very few tandem parachuting accidents - I can recall one dual person fatality and one where the passenger received 2 broken legs + (charming) but both were long ago. such things can happen anywhere if you insist on such activities.

We had a multi person hot-air balloon disaster a few years back but AFAIR the operator was found to have taken Marijuana soon before flying and broke industry standard rules. So that means hot air ballooning will be MUCH safer for the next decade or so.

If you ski and break the rules you can die (I tried but failed) and otherwise it carries the usual skiing hazards. Fields are good, lifts are good, very very few lift accidents happen.

We has a very major canyoning incident in the last 10 years where a school group got caught in a deep gulley with no easy exit and many died in a flash flood. Rules were broken, weather reports were not heeded - and organaised canyoning will be safer for the next 20 years.

You can white water raft, kayak, black water cave, body board down rapids, ... and you have to know you are putting your life at risk in all such cases - but deaths are years apart.

Para gliding? - There are rules. Most of the people who die have broken them to some extent. But there are always the "just bad luck" cases - but no more so than anywhere else.

Speed-flying - paragliding on skis where the object is to try to kill yourself without succeeding? 'nuff said.

Probably of interest is 'kite surfing" - common enough and popular. Opportunities to die exist and, alas, some take them. Being lofted off the sea and across a car park sounds like exceptionally bad planning and was fata in the one case I heard of. While you can hire gear, if you are competent and serious then living or dying is largely in your hands personally.

But/and - overall, NZ is about as safe a place as any to do crazy things for fun. Come and try ! :-)

Not the answer you're looking for? Browse other questions tagged safety new-zealand extreme-tourism statistics extreme-sports or ask your own question.