Do bus stations have names in Latin letters in Tokyo

I'm planning to visit Tokyo this year, trying to plan out my trip, but in Google maps I get things like: x０３towards xxxx (where x is a Japanese letter) This is a bus station. Are they available in Latin letters? How can I get help with this?

That's actually the bus line and its destination, and the Google Maps directions already convert both the starting and ending stops into English (well, romanized Japanese). For example, if going from Roppongi to Shibuya, the only sane choice is the 都０１ (Metropolitan #1) bus and this is what you get:

"Ex Theater Roppongimae" (EXシアター六本木前) is the stop you board from, and "Shibuyaeki-Mae" (渋谷駅前, "in front of Shibuya Station") is both the destination of the bus and the stop you get off at. Tip: "-mae" (前) means "in front of", and is very commonly used in the names of bus stops to mean the stop is right outside a landmark.

While Japanese bus stops typically do not have any English, Tokyo buses are generally an exception and they will have it in small print, like this. This also applies to the destination sign on the bus itself. Note that the kanji prefixed to the bus route is not translated, but in practice it's unusual to have overlapping numbers, much less destinations.

One (more) thing to take note of is that the actual locations of bus stands around large stations can be spread out quite significantly. They are usually numbered, but these numbers have no correlation to the bus route number, and AFAIK, Google's transit directions do not consider the exact location either.

See the attached image for buses departing from Shibuya for one example. 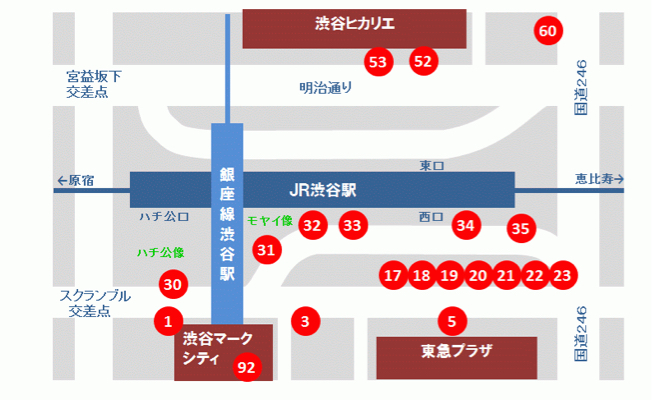 I was in Japan a couple of months back (visited both Tokyo and Kyoto as part of the trip), and pretty much everything is written in kanji AND romanised Japanese when it comes to public transport. You don't have to memorise the kanji! :)

In addition to the answers provided the signboards in the bus the destination is provided in English with the Bus number. Be sure to board only from the front door. but, you can alight from either of the doors

And once you hop in there is an electronic display which says the next stop(mostly in Japanese Kanji, try to match the kanji by looking from your app) and the audio plays before every stop both in Japanese and English. Press the illuminated yellow button to alert the driver, these can be found on the backs of seats or along the walls.

Not the answer you're looking for? Browse other questions tagged buses tokyo japanese-language or ask your own question.

8
Is it generally true that Japanese people are more reluctant to help Asian compared to Western foreigners?

3
Is there a bus connection between Narita airport and Tokyo Asakusa?
3
Cheapest way to get around in Tokyo
17
Wheelchair travel in Japan
4
Is Luong Yen bus station still operational?
38
How to make sure that you get off at the correct bus stop in Thailand?
8
Where does the Tokaido Shinkansen stop in Tokyo?
20
With '7-day Unlimited MetroCard' in NY do I have to wait 18 minutes to transfer from one line to another?
4
Visiting a concert in japan
12
Avoid long walking when changing between Tokyo subway lines