I am going to be in Berlin for a weekend and would like to photograph and tour some Bismarck structures, underground bunkers or any industrial complex. What are my options?

For general communist architecture I would start at Alexander Platz and walk down the 'Karl-Marx-Allee' all the way to 'Frankfurter Tor' in Friedrichshain. There is nothing super special there, but the street was used for the big parades and still has a bit of an 'East German' feeling to it.

As for bunkers, there are still many around, some of them from the World War 2 era, others from the East German times. The site 'Untergrund Brandenburg' (in German) lists many bunkers in Berlin and the surrounding state of Brandenburg. They have many photos, so if you find something you like, you get at least the name of the place and can research it further. BTW, Hitler's underground bunker does no longer exist.

As for 'industrial complexes', I don't know any first hand. The Berlin Branderburg film commission has a database of sites to use when you are looking for a location to shoot a film. That should work for photos too. Start on their search page, select an era like 'Sixties/East' and a style, or jump straight to their industrial buildings category.

My favourite communist architecture in Berlin is definitely the Frankfurter Tor and the rest of the "Stalinallee ensemble". 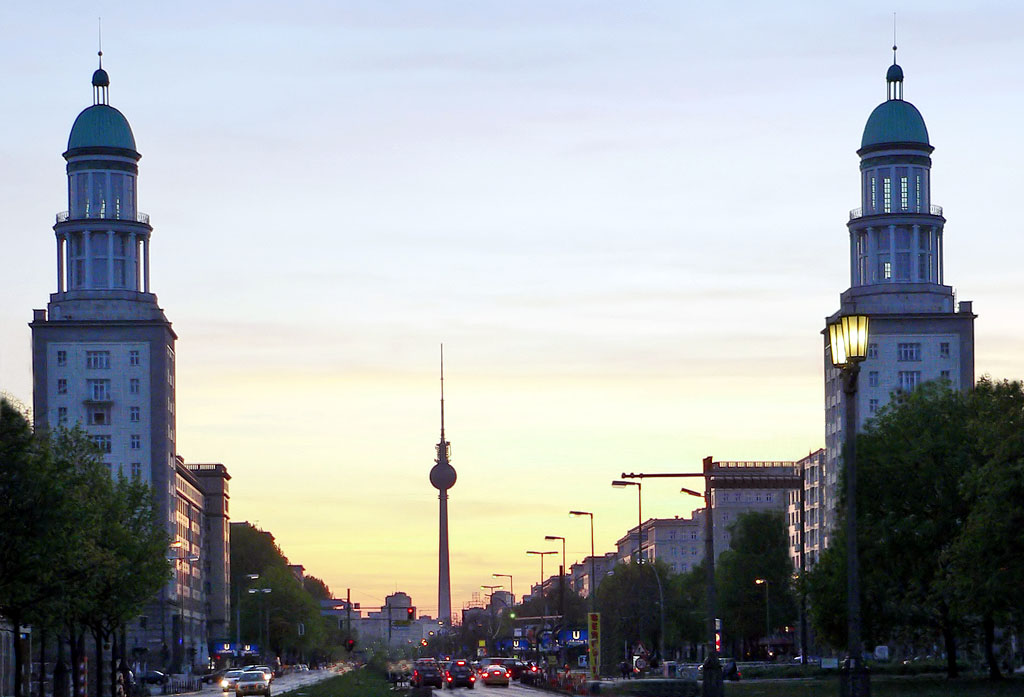 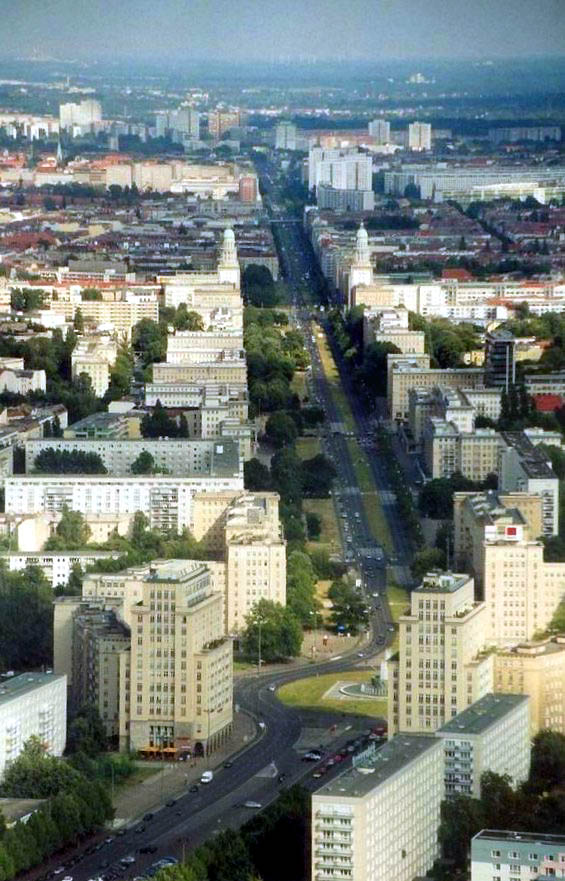 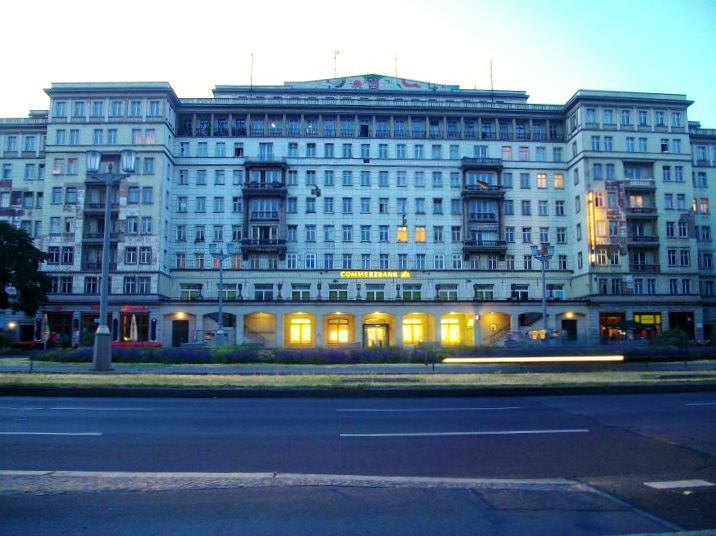 I'm not sure if this is exactly what you mean by "Bismarck structures" though. These are normally described as Stalinist architecture.

One amazing Soviet structure is the World War II memorial in Treptower Park, in the southeast of Berlin. (There are several Soviet war memorials commemorating WW2; another is in the Tiergarten. I haven't seen that one so have no idea what's it's like, but the Treptower one seems to be more well-known / renowned, in my experience.)

Many people seem to like the immense statue in the centre, but I personally find the friezes depicting the struggles of war very powerful and worth seeing. This page has a lot of photos, some of which are: 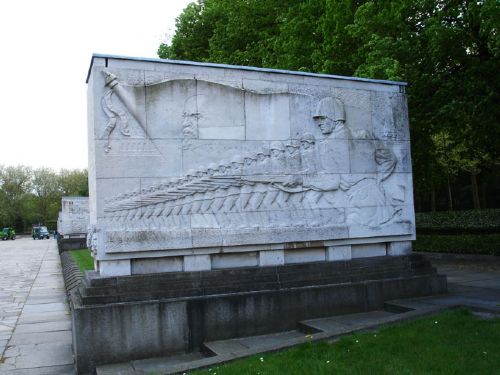 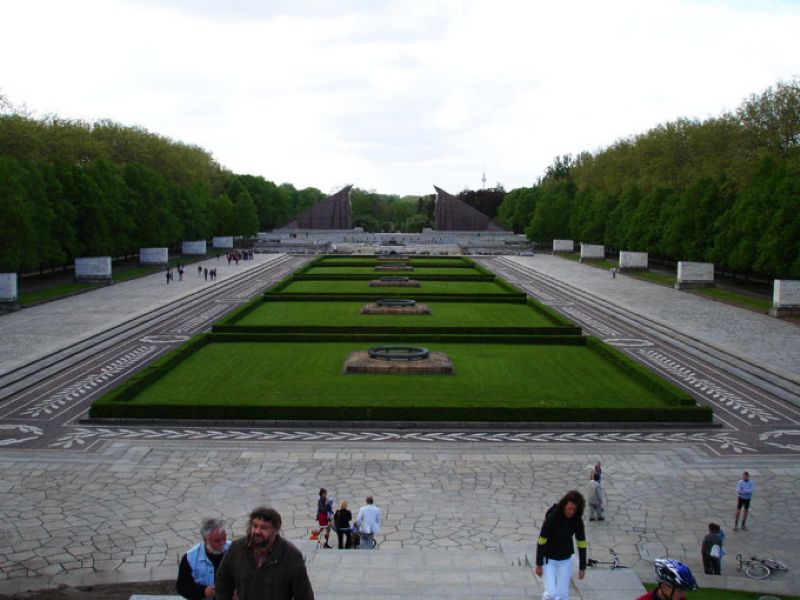 Overview of some of the memorial.

I don't think these photos nearly do it justice, but unfortunately I don't have any of my own I can upload. The artwork in the friezes is astounding, and, even though you can view it as propaganda for the Soviet Hero, moving.

Nearby is Spreepark, an abandoned amusement park built in the Soviet era. Since it's an amusement park, it won't have 'standard' Communist-era architecture, but is an amazing place to visit. It is privately owned and fenced in, but ahem very fun to explore. It's like being in a post-apocalyptic world: ruined structures, trees, silence apart from the birds (it's in the middle of the forest!), rusting structures like roller coasters and other rides silently soaring through the trees. Don't get caught inside. 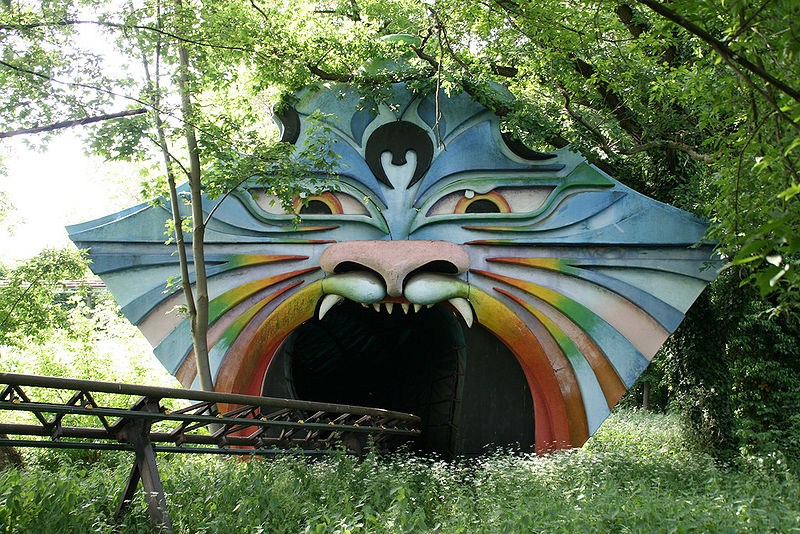 Take the brown U5 metro out towards Hönow. Built by East Germany (the only major new line they built in 50 years, as it happens), the line's sole purpose in life is to serve huge housing complexes, which are about as Communist in style as it gets. This thread on SkyscraperCity will give you some idea:

Search for "commieblocks" for plenty more.

You can book an "Underground Bunker Tour" here: Berliner Unterwelten. There are several options to see bunkers or subway tracks that ran from east to west with underground checkpoints at the fromer border.

There is also the Gesundbrunnenbunker where you can book a tour. And you can see the Flakturm in the Humboldthain near by.

Not the answer you're looking for? Browse other questions tagged sightseeing germany architecture photography berlin or ask your own question.

10
Half day in Berlin - after non-classical tourist spots

10
Half day in Berlin - after non-classical tourist spots
16
Where can I find short term apartment rental offers in Berlin?
4
What are the recommended concentration camp tours near Berlin?
24
How are validated underground tickets checked in Berlin?
5
Berlin to Göttingen by Train or Bus
5
Where can I leave luggage in Berlin and be able to pick it late at night?
8
Which options do I have to travel in Berlin in an affordable way?
7
Pre-booking a visit to the Reichstagsgebäude in Berlin