Why does no connection exist between Euston Square and Euston or Warren Street Underground Stations on the London Underground? [closed]

Since moving to London I have found it frustrating when having to change from the Northern line (coming from the North) onto the Circle/Met/Hammersmith & City lines. As you can see from the image below I am required to take the Bank branch of the Northern line to King's Cross to be able to change; if I am travelling west on the C/M/H&C lines then I have to cut back on myself.

Does anyone have any explanation as to why the said links/connections do not exist? 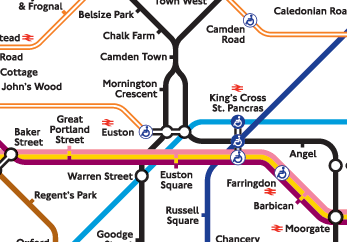 It's called the 'learning curve'...

In the 19th century, incoming trains to Euston Station from Birmingham had their engines detached in Camden Town and were pulled into a large storage area underneath the station, more to the point, underneath Euston Road. Trains to Birmingham were assembled there and pulled up into the station by rope.

The Warren Street tube station was a latecomer, arriving in the 20th century, but the storage area was still being used as a turn-around facility for incoming trains. So there was no place to situate a passenger tunnel without having to go too deep or too far around.

If you have ever taken the #1 train in Manhattan to the Battery and rode while it turned around, it is similar to that in appearance except there is no facility for a train to turn around under its own power.

British Rail ran a public consultation about station refurbishments in the early 1960's, and the 'public' wanted a car park built underneath the station more than anything else. When HM reopened Euston Station in 1968, parts of the original storage area were still there but unused. Trains running in and out of Euston are bidirectional in the modern era so its ongoing value is dubious. The last time the general public had any awareness at all of that area underneath Euston Road was in the aftermath of the 7/7 attacks when it was used as a repair point.

Since Euston Station was the first London rail station to serve as a terminal point for a national rail line, they learned from this 'mistake' and main line stations in Central London that followed used a different strategy to deal with arriving trains. That's why you observe the anomaly at Euston, but not at other stations that were built later.

If you want to take up advocacy for having a tunnel built, the relevant consumer lobby is Transport Focus. Gagravarr pointed out that the Crossrail2 project may hold possibilities, but it's also reasonable to expect relentless and unyielding opposition from the Bloomsbury Ward.

Our view is that this site is not suitable for a station entrance and we are concerned about any machinery or ventilation equipment that may be installed here as it could cause a noise nuisance. We are also concerned that any future works could cause a noise nuisance. It should be noted that local residents have had to endure the noise from Crossrail works as well as the redevelopment of the opportunity area around Tottenham Court Road Station.

Building tunnels is very expensive, so London Underground / TFL / Government aren't keen on doing so willy-nilly. New underground walkway tunnels are generally only constructed during big refurbishment works / new lines, not at other times. If Crossrail 2 gets built, as planned with a station near Euston + Kings Cross, it's likely that they will put in the missing tunnels as part of that. Until then, linking two old bits of the network with new expensive tunnels isn't going to happen

Walking outside is probably actually quicker than a badly-placed tunnel, so unless it's raining, it actually works fairly well for a free option!

(Warren Street doesn't have an allowed out-of-station-interchanges, so between the Charring Cross branch of the Northern line and H&C/C/M lines you'd need to use Euston + Euston Square)

Not the answer you're looking for? Browse other questions tagged london tfl or ask your own question.

10
Is it possible to deduce the London Underground line based solely on the set number at the front of a train?
8
Quickest way from London Paddington station to London City Airport?
18
What's the quickest way from London Kings Cross to Euston, by foot or tube?
7
Quick way to exit King's Cross tube station?
19
Is there a map that shows the walking time between London Tube stations?
12
What does “The following London stations are available for travel with the chosen ticket” mean?
11
Why does cost of the travel from zone 1 to zone 3 in London depend on means of transportation?
23
Paddington to Euston with kids: minimum walking by tube or by taxi?