Labuan Bajo to Ruteng to Bajawa by motorcycle, possible?

I'm in Indonesia, in Flores island, and I want to go from Labuan Bajo to Ruteng and then to Bajawa by motorcycle but I'm unsure of the state of the road.

If you can provide the following details that'd be great:

The information below is from 2015.

State of the road

The road used to be just one big lane (kind of 1 & a half lane). And it had its share of potholes. So whenever a vehicle came in the other direction, you had to slow down and squeeze to the side of the road.

But now, in 2015, the road is being rebuilt. Actually, about half of the road between Labuan Bajo & Ruteng is already pretty good (the best part is mostly close to Labuan Bajo). The road between Ruteng & Bajawa is also under construction but at a less advanced stage, it's only finished in very small parts.

The new road being built has 2 lanes, one for each direction, pretty useful when driving in mountain roads!

My guess is that the road work will be done sometimes in 2016. Many workers are building it & it seems to already be on a good way.

Whether you have a very powerful motorbike or not, your speed is limited by the state of the road, and also the fact that it's far from straight. A lot of it goes through mountains.

It's COLD the closer you get to Ruteng! And then from Ruteng to Bajawa it does not get any better. Do take a waterproof jacket (or a poncho rain coat), & some warm clothes (take a scarf). There is some kind of micro climate, there can be lots of fog, some rain, and the temperature drops.

Another thing: you do NOT want to ride at night. There are rocks sometimes on the road, and on top of that when it's dark it gets even colder. Forget about trying to avoid rocks on the road at night while focusing on the winding mountainous road & potentially coming vehicles. In my experience it's much nicer to ride in the morning when you are fresh & don't have to worry too much about arriving before sunset.

Would I do it again: no. In the end, you spend a lot of time riding the bike and get very tired, additionally you will most likely catch a cold (I did) and take the risk of having an accident or having the motorbike to break down. Finally, all the activities to do are close to Labuan Bajo, Ruteng or Bajawa so it makes more sense to go by car/bus from one place to another and then maybe rent a motorbike there to explore the local area.

Pictures of the road

The road being built, big rock into small rocks...

Some other partially built part of the road

A part of the road that is finished (I think)

The fog on the road when getting closer to Ruteng 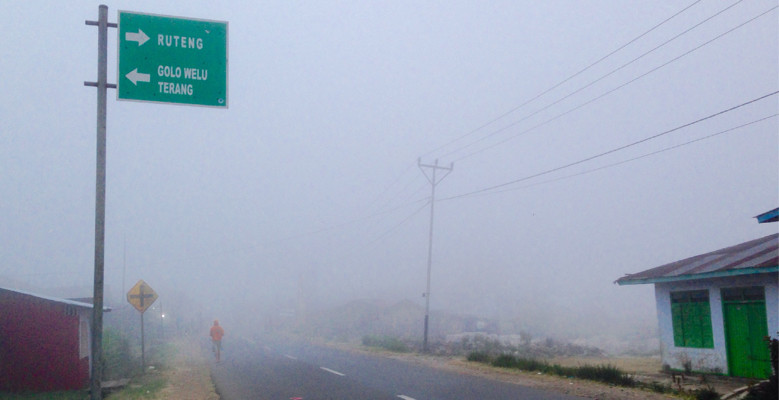 Myself and two friends just returned from a trip to Flores a week ago. We rented Honda Tiger motorcycles , 200cc. in Labuan Bajo and went to Maumere and back. The roads are mostly good but very windy which motorcycle riders love. Be ready for rain, torrential rain, rocks on the road, landslides, small children, chickens, goats, cows and lots of crazy Indon riders and drivers.

Had a great trip, some fantastic bike riding, two thousand kilometres and ten thousand corners, loved it , don't hesitate get on that bike and go! BUT don't ride at night, we observed about forty percent of bikes at night had no lights at all!

Not the answer you're looking for? Browse other questions tagged transportation indonesia motorcycles komodo or ask your own question.

4
Is it possible to ride a motorbike through Sumatra, Java, Bali, Lombok, Sumbawa & Flores?