When visiting urban areas in Australia, do I need to be worried about deadly insects / animals?

Australia is known to have more than its fair share of deadly insects and animals. These would obviously be a concern when, say, you're off in the wilderness but is there any reason to be worried about anything in particular in urban areas? (Say, commonly found deadly spiders.)

Venomous spider bites have not caused a death in Australia since 1979. You are far more at risk getting into a car than being bitten by a spider in Australia. Bites from red backs very rarely cause anything more than a little discomfort, but if you are bitten, always seek immediate medical help. Anti-venom is widespread and you should not be far away from treatment in urban areas.

Snake bites are rarer still in urban areas. Most snakes prefer the outback for their domicile, but snake bites can be more deadly. There is an average of 2 deaths a year due to snake bite, but again these tend to be localised to the bush. You can get snakes in urban areas but you are very unlikely to come across them.

Bottom line is, don't worry, you are more likely to be struck by lightening than you are to die from a snake/spider bite!

The biggest danger by far is from jellyfish. Some will paralyze you and cause you to drown, while others merely put you into excrutiating pain for up to 30 hours.

Fortunately, jellyfish are easy to avoid: stay out of the sea, at least between October and May while you're north of Brisbane (more detailed information) - no matter how urban the area, how hot you are or how inviting it looks.

So let's take an analytical approach; I've not done one of these in a while.

Let's say every animal in Australia was out to get you. Now things like the sugar glider or a koala may have a nasty bite, but it's unlikely to be lethal. So let's focus on what could end you.

The ABRS maintains free online databases cataloguing much of the described Australian flora and fauna. Impacts such as the illegal setting of traps in rivers affect animals such as the Australian platypus, along with lack of awareness each year an average of 2–5 Australians lose their lives to what is presumed a safe creature. The key is understanding of Australia's diverse wildlife and fauna; what seems safe is often deadly.

Contrary to urban legend, white tail spiders do not cause necrosis. Huntsman spiders are not venomous, though they're scarily big to some.

Goannas may be a risk if they mistake you for a tree (which does happen). Cassowaries are capable of disemboweling you.

Sea squirts can be venomous: don't stick your fingers where they shouldn't go, or pick them up (it's not good for them anyway).

My wife still claims psychological trauma from the infamous geckos roaming around freely through urban areas (mostly in Brisbane), but I was rest assured that they are harmless - quite contrary to their menacing looks. 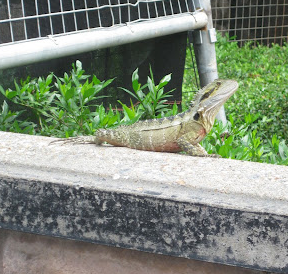 Not the answer you're looking for? Browse other questions tagged health australia or ask your own question.

6
What limitations are there on my 4 month old UK driving licence for use travelling across Australia?
4
When entering Australia with an eVisitor visa, do I need a return ticket?
1
When applying for a tourist visa for Australia as a South African, do I need to supply bank statements?