What is the oldest train in the UK still operated regularly for a non-tourism purpose?

What can I find the oldest train in the UK still operating regularly, and the train(s) is/are operated for common service but not solely for tourist attraction?

And which route(s) are they serving?

Note that this answer was perfectly correct when written but the trains to which it refers have been replaced with the 484 series built in the mid-1970s. The link to the Wikipedia entry to which this answer refers has now been updated to reflect that.

Because of the low ceiling of the Ryde Tunnel, the Island Line has a much smaller loading gauge than the rest of the UK mainline rail network, so has to use different trains. Today, those are the class 483, which are refurbished 1938 London Underground trains!

As explained in the wikipedia article on the trains

The stock is around 75 years old, making it the oldest type in Great Britain to remain in regular service

And they look like this, in their current (returned to historic) colour scheme: 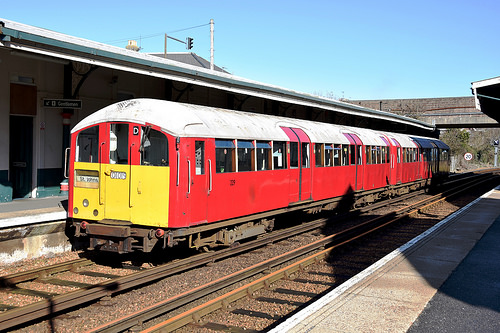 It may be touristy, but has regular scheduled operation: the Snaefell Mountain Railway on the Isle of Man.

I was speaking to a guard at Brighton station about how stinky the coastal trains are, and he told me that Old Blue is the oldest train in the country in use today. I'm riding it to work today.

9
What time does the train from Yerevan arrive in Tbilisi?
17
What is the most expensive train ride in India?
14
Where can I find train routes using Wild West locomotives?
6
Eating on the Palace on Wheels, in Rajasthan, India if I have dietary restrictions
19
Do non-CIS nationals have issues with visa checks on the Moscow-Dushanbe train?
10
When my train is cancelled and I choose to travel the day after, what compensation am I entitled to?
43
What is the oldest building in the world still in use?
5
In the UK, what does "previous connecting train service" actually mean?
8
My UK train in 2 weeks got canceled, can I trust the train will go if I book another one for the same day