What are these "stone walls" in the sea on Cyprus?

I'm currently on a vacation in Limassol, Cyprus and one thing I found interesting are these wall-like structures made out of stone that seem to exist along the whole coast. 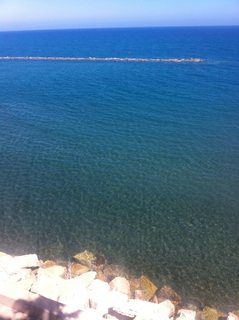 They seem to be created out of piles of rocks that aren't connected in any way, but just stacked on top of each other and are located roughly 50-100 meters from the beach.

They are called "groynes". A great addition to anyone's vocabulary http://onelook.com/?w=groyne&ls=a It is pronounced the same way as groin (i.e., as a diphthong that rhymes with 'loin').

Briefly, they are man-made structures designed to break the waves and thereby prevent erosion of the coast. They are all over the Med in places where the tide influences the landmass. Also ubiquitous in Europe. In the UK, groynes are very helpful in preserving grazing land for sheep. They also help prevent further erosion of the cliffs in Dover and regions on the east coast where the tides threaten the loss of landmass.

As a tourist, be aware that walking on a groyne may attract a reprimand if an official sees you. It is also not very smart because they are slippery and a fall will almost certainly be injurious.

If you want to take a photo where the view is unobstructed by a groyne it will be difficult unless you go to a beach in calmer waters.

Once the vocabulary is sorted out it all becomes rather boring, but you can find a wealth of information in Wikipedia.

As a scientific discipline, groynes are part of Coastal Management.

For your question about when they were built... Certainly the 19th century would weigh in as a centrality. Arguably, the most famous would be the Cobb in Lyme Regis. Speaking of the Cobb (a structure similar in appearance and function to a groyne), John Fowles writes...

The Cobb has invited what familiarity breeds for at least seven hundred years, and the real Lymers will never see much more to it than a long claw of old gray wall that flexes itself against the sea. In fact, since it lies well apart from the main town, a tiny Piraeus to a microscopic Athens, they seem almost to turn their backs on it. Certainly it has cost them enough in repairs through the centuries to justify a certain resentment. But to a less tax-paying, or more discriminating, eye it is quite simply the most beautiful sea rampart on the south coast of England. And not only because it is, as the guidebooks say, redolent of seven hundred years of English history, because ships sailed to meet the Armada from it, because Monmouth landed beside it ... but finally because it is a superb fragment of folk art.

...which leads one to think that coastal management is at least 700 years old. The ones in Cyprus would most likely be dated to when the British arrived, but that's a guess.

The word itself is dated to the 16th century, the etymology of 'groyne' is a dubious theory that it comes from "pig's snout" in French.

Note: your image does not show the full shore line and so its orientation is not known. The structure could also be a "breakwater" or "jetty" or "mole" or an underwater groyne connecting to a breakwater or a "seawall" or an extension to a harbour wall, or sea rampart or even something more arcane. Limassol also has some ancient fishing shelters which may also qualify in appearance.

Not the answer you're looking for? Browse other questions tagged beaches cyprus or ask your own question.

24
Northern Cyprus - way to visit and what problems can I have with Republic of Cyprus after that?
15
Getting to the sea from Oxford
3
Are Turkey Black Sea beaches suitable for bathing in summer?
14
Is the border between Cyprus and North Cyprus an issue for a casual tourist?
2
What are the requirements for a schengen visa to Germany from Cyprus?
2
Are there cross-border buses between Cyprus and North Cyprus?
5
What accurate offline GPS apps are there for the whole island of Cyprus?
3
What is the best day of week and time to visit Cyprus mountain villages?