How big are the luggage lockers at Oslo's central railway station?

All being well, I'm going to be having an 8 hour layover in Oslo next week. I'll be changing between airlines and between tickets, and I won't be able to check my luggage through. Given the length of the layover, I won't be able to re-check it on arrival, so I'm pondering what to do with it during that time. My current plan is to hop on the train into the centre of Oslo, and do some sightseeing, but without the luggage!

The Oslo airport website gives details of their left luggage, but it's priced per item so for 2 bags for >5 hours would be a moderate cost.

The NSB website says that Oslo Central has luggage lockers, but not how much nor what size. This tourist website mentions prices for the lockers varying by size, but doesn't mention the sizes.

Assuming my bags do fit in the largest locker in Oslo Central, it looks like the cheapest option is to take my bags on the train, pop them in a locker then go sightseeing. However, if it turns out they don't fit, it's then a bit late to leave them with the airport left luggage!

So, my question is then, how big are the lockers in Oslo's Central railway station?

If you enter the locker area from the ground floor (not via the escalators), then by the lost property desk are a handy set of baggage sizers, so you can quickly work out what size you need! They look like this, rucksack included to help with a sense of size 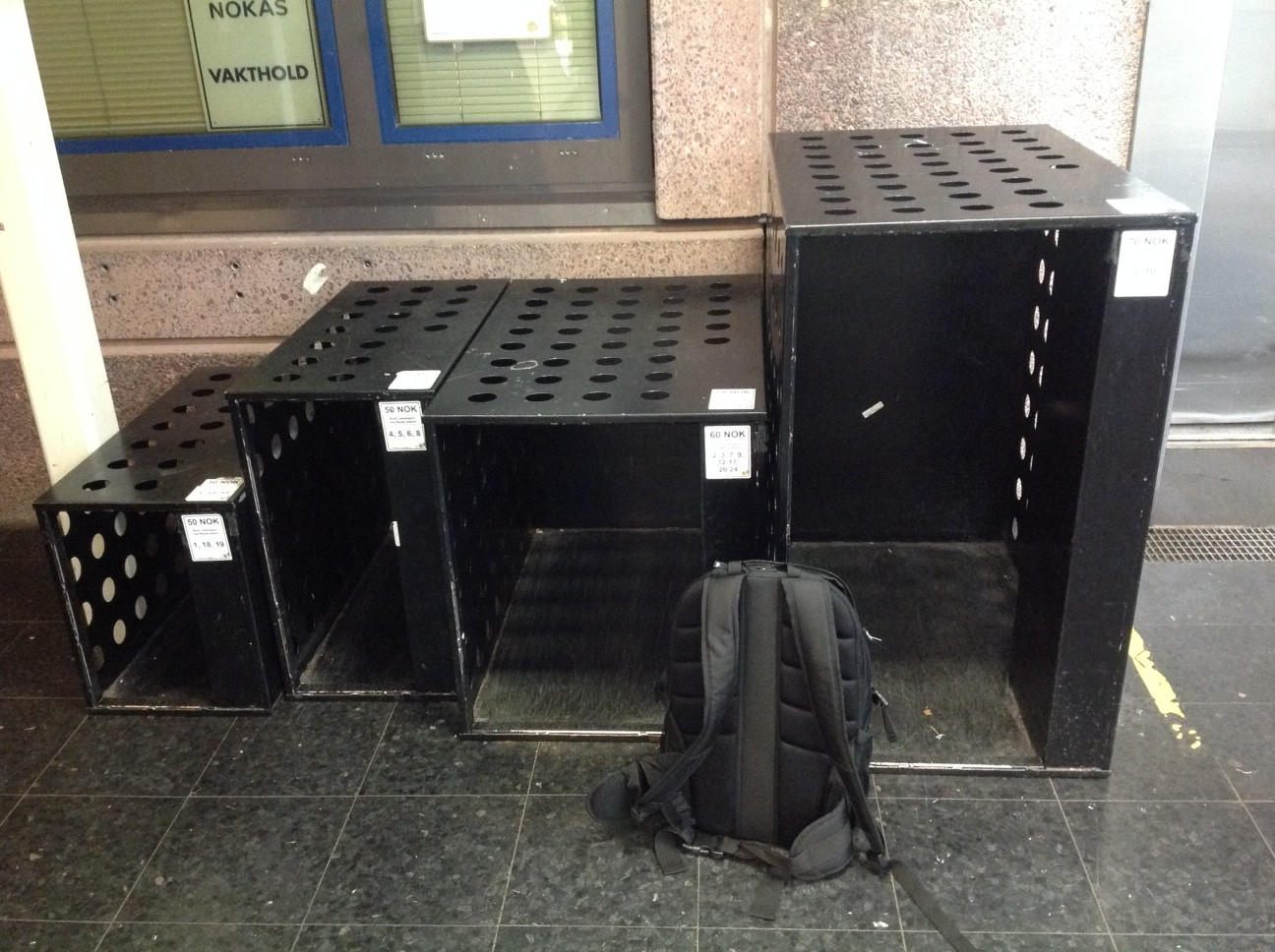 Having worked out what size you want, you then wander round the banks of lockers (of which there were something like 5 rows). When you see a bank with the size you want, the screen will tell you if any are free (look for the green bar at the top), then switch it to English if you need and proceed to rent your locker.

Costs were from NOK 50 to NOK 70 per 24 hour rental, but you forfeit any remaining time if you open the locker during the period.

In addition, they also had a set of full height ski lockers at the very back, so you could store your skis too! Looked to be about 20 or so of those.

6
Traveling with lots of luggage at Brussels, Midi Railway Station (ZYR)
7
How can you buy train tickets at Oslo Airport?
9
What historic sights can I see in Oslo on a 4 hour train layover?
10
How does excess luggage work on Polish trains?
4
How to handle a 12 hour layover in Miami
7
Are there any baggage lockers at Amsterdam Zuid Station?
5
Have I bought the wrong type of luggage to take in to the cabin of my Emirates flight?
2
Will British Airways check baggage through, despite an overnight layover at Heathrow?
0
At transit or layover, have checked-in luggage transferred to the next airline without passenger retrieval and re-drop