Why ITA Matrix is failing so much last months?

Last months I've noted that Google ITA Matrix is giving results (ticket prices) impossible to buy. The first time I perceived it, I was going mad to find where to book this ticket price online and after a lot unsuccessful search in sites like Edreams, Trabber... I tried to book it through a physical travel agent without success (I asked in two different agencies).

An example of today. If I search a flight from Cancun to Madrid using ITA, something like this: 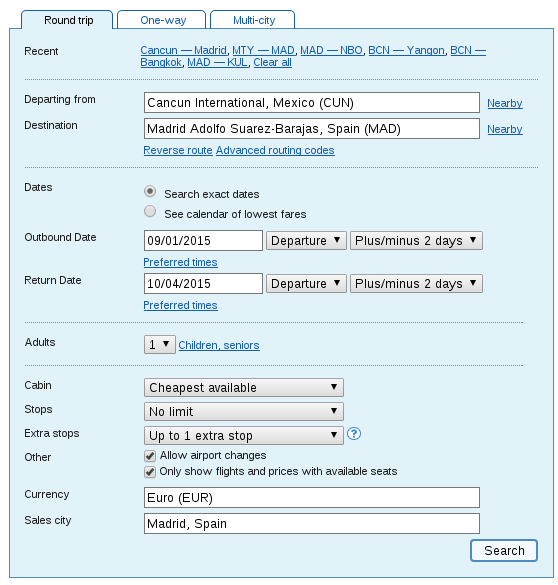 I get this result:

But when I try to find a price similar to the showed in ITA using an online tool, it's impossible to find any similar price, even the company site gives prices near the double.

What's happening with this? It's not a problem with a given company, but I've found that there are airlines that are more given to return inexact prices (i.e. is common that Turkish Airlines gives prices lower in ITA than in other search engines).

Is possible that some companies are giving fake prices to ITA? Or is ITA who is not searching right? Or may be the problem is that I don't know how to find these prices than ITA can?

NOTE: I've tried to use proxy servers to avoid the location problem. In the example given above, I've used a Mexican proxy to pretend to be in Mexico without success.

It is not easy to give a complete answer to this problem.

First, I see in your example that you are using the sales city of MAD. I presume you are aware that means you must buy the ticket at a travel agent in Madrid for the result to be valid. If you buy on a website such as Expedia, quite often the point of sale is that of the itinerary origin, not that of the website's stated location. Or alternatively it might be somewhere else in Europe. If it's an aggregator, then who knows. (btw, ITA certainly doesn't care about your IP and I don't think any major travel agent does either.)

No one is lying to ITA because ITA pulls the information out of the same system that everyone else uses.

However, ITA relies on heavy availability caching throughout its network of servers. The problem is that no airline in the world has the IT capacity to support the sheer number of availability queries that are asked every day. So in order not to crash every airline server in the world ITA realized early in its evolution it was going to have to do a lot of caching. The same thing applies to other online travel agents, who must implement their own caching system.

So I believe a lot of folks will cache LON-DOH and DOH-BKK (for instance). When someone asks for LON-DOH-BKK they assume they can take the minimum availability of those two, separate flights and present it as the through-availability of LON-DOH-BKK. But that isn't true at all.

The true availability is often only known when the travel agent creates the PNR (passenger name record) and requests confirmed reservations in the appropriate booking codes on the desired flights, and the airline replies with the surprise status "UC" (unable to confirm/waitlist) instead of "HK" (hold confirmed).

The next problem is that the ITA QPX pricing engine is a lot more intelligent than anyone else's. So ITA can often find very clever and highly non-obvious ways to price even simple round-trip journeys, methods that will simply never occur to anyone else (including the airline). So when taking your itinerary to a brick-and-mortal travel agent, make sure you include the fare quote line from the print out, stating how the fare is constructed.

In my experience ITA is right 95% of the time.

When dealing with a complex itinerary, you could try firing off an email to these guys with your ITA result: http://www.flightcentre.com [Don't use the online flight finder but actually email them with your ITA result.] I have heard good things about them. I am sure they charge a fee though.

Not the answer you're looking for? Browse other questions tagged ita-matrix or ask your own question.

4
How I can book LHR to TLV at the price shown by ITA Matrix?
16
What is the difference between Google Flights and the ITA Matrix?
15
Are there “traditional” travel agents receiving requests online for ITA fares?
5
Is it possible that a fare is shown on ITA Matrix but not available to agencies?
9
Does the ITA Matrix work for all destinations?
13
ITA Matrix search — how do I force a connection point to be in a country?
9
Price difference on Matrix ITA and Google Flights
4
Could I have found this flight plan without knowing to look for it?
6
ITA Matrix Search - at least one connection point in MUC? “No flights found”
3
ITA Matrix search for London-Minsk flights with first leg on BA only returning part of expected results