Is it possible to visit the cockpit after the plane arrives? (commercial flight only)

I've been told by my friend (who is on an aviation academy for becoming a pilot), that it's possible to visit the cockpit if you agree with the flight attendants (and of course they ask the pilot).

Is this really possible if the pilot allow you to? Or there is any kind of "law" than forbid this?

As far as I know is not possible for anyone to go into the cockpit during the flight, but after arrive perhaps?

Or if is not forbid by any law, maybe from the airline companies rules?

I'm just curious about how does a cockpit looks like (seeing by my own eyes), but never asked in any of my last flights. Should I?

I don't think there's any law about it on the ground, at least in most countries.

So in that case it is up to the pilots.

If you're flying in Europe on a short haul carrier the turn around time is pretty tight and the pilots will have a lot to do to get ready for their next sector. Also the plane has to be cleaned and so on in about twenty minutes so really they want you off the aircraft ASAP.

But if you just took a flight from London to San Francisco the pilots have a bit of paper work to finish and then they go to the hotel. So on longhaul flights the flight crew are often happy to show you around the cockpit—especially if you have kids. If you travel on BA the pilots sometimes have a kids' pack to give out to kids that they invite to the cockpit. The pilots sign a kind of "log book" for the kids so they can keep track of all the planes they go on. I'm sure other airlines have similar things.

If you are an adult they will also oblige you as well! A friend of mine was allowed to sit in the captain's seat (after landing) recently on London-JFK, and got a nice photo for his Facebook page.

Best is to mention it to the cabin crew when they don't look busy. A polite request such as, "Hi, I wonder if, after landing, we could have a look in the cockpit?" will be sufficient.

Sometimes you will even be invited to access the cockpit in flight, but this is a bit more rare these days. In that case it depends on a lot of factors including the local law (of the aircraft registration country, country of departure and country of arrival) and how strictly it is applied.

For the airline I work for rules simply say "passengers are not allowed to enter the cockpit at all times" and this is the rules for most (if not all) airlines, but out of personal experience as a cabin crew member this is not something unusual to happen after landings, especially for younger ones. After all the captain is in charge and can break the rules.

Anyway, keep in mind the following if you are to ask for the same:

For those who wonder what might be the risk of letting someone enters the cockpit after landing? well, people can always put "something" there. So, if you were allowed by the pilots to take a photo inside, do not expect to spend time there, it will be just a quick photo with the presence of the pilot(s).

I am young - but my body is rather old. I still find it interesting to look at and take photos of cockpits (and just about everything else).

As I invariably travel cattle-class I often get to the exit near the cockpit too late, but when circumstances allow, after the flight, I occasionally ask if I may visit the cockpit. I've done this maybe 5 to 10 times in recent years & I have been permitted to on all occasions bar one (and I think that that was not the pilot's decision). Once there I ask if I may take photos and on every occasion I have been allowed to.

Crew sometimes pose in their seats for the photos and sometimes move aside leaving a person free view.

Flights have been either NZ-Australia, NZ-Asia or (less common) Asia internal. Airlines have been a cross section of those who fly those routes.

When any of the photos surface I'll post one or two here.

4 years later (August 2015) - here's one from my wanderings.
Not marvellous as photos go, but the fun of the moment is the point. I imagine they are not too keen to be posed and arranged etc. 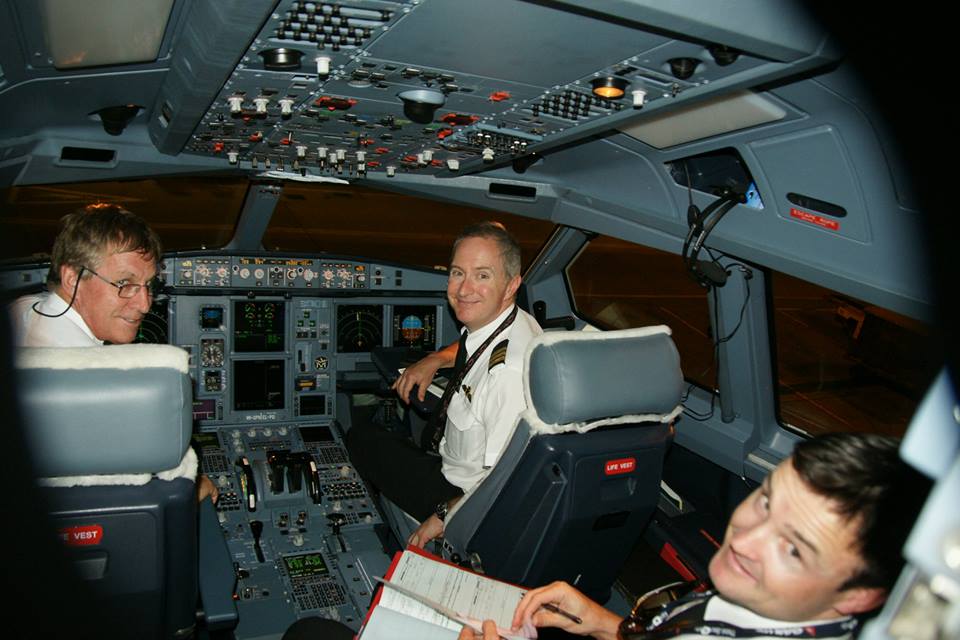 The one below is not one of mine, alas :-) - this is a view in and from "White Knight".
Larger version here - click once to enlarge after loading.

There is no law that forbids you access to the flight deck in the US or most elsewhere in the world after the flight is completed. The only thing that prohibits you from doing so is policies of individual companies or the decision by the Flight Attendants or Flight Crew.

There are many questions on the interwebs related to the subject but the most recent one I was able to find as a reference:

I was young and in flight my father asked the flight attendants if I could see the cabin. I got inside and one pilot even let me control the plane with a lever or something and it bumped a little. I was like 6 years old and it was a really cool experience. So it depends mostly on how friendly pilots and flight attendats are. Just ask them.

I was twelve when this happened, but our plane SYD-PER was delayed getting to the gate, so i started talking to the pilot. He was very nice and we were just talking about the best and cheapest way to get a pilot license, when the plane came in. As i said goodbye so the pilots could board, he turned around and said, "If you stay last on the plane, you can come up and see us in the cockpit. The flight attendant came and got us, and i got to take some photos and have a look around, including sitting in the seat of the pilot. I never asked, but being polite can get you places.

Not the answer you're looking for? Browse other questions tagged air-travel in-flight-services or ask your own question.

11
Air New Zealand's policy on obese passengers
6
Catching separately ticketed flights through an airport without leaving the transit area
25
Can a child still visit the cockpit during flight?
14
UK tourist visa refused 3 times. Need to get there for flight home
11
Flight ticket reimbursement after Travel Warning
2
Is reimbursement possible for a headset cable that was broken by the service cart during a flight?
60
What commercial flight route requires the most (minimum possible) stops/layovers from A to B?
73
How do I minimise waste on a flight?
35
What happens if a passenger wants to get off the plane during a runway delay because it ruins their travel plans completely