Where exactly is the Myanmar consulate in Kunming, China?

Yesterday I thought I'd wander down to the Myanmar consulate here in Kunming to ask them for more details about getting a visa and visiting by crossing the land border with China.

My hostel (The Hump) had full directions posted on the wall. (I was going to check the Internet but the guest computer had no connection and I didn't want to set up my laptop whose battery is dead.)

The address given was 6,800 Caiyun North Road. Nine stops on bus 213 from the hostel. In the same building as a certain hotel near a named bus stop.

I don't mind walking even if it takes a couple of hours and I left before 9am. Well I walked until 2pm and found that the section of the road between about numbers 3,500 and 11,000 had most likely been redeveloped or levelled. Those numbers were missing. I never saw the hotel or bus stop listed. It's way, way out of town.

When I got back (on the brand new Metro!) I found the Internet has a different address, 166 Weiyuan Street. That's about a 20 minute walk north from the hostel in the centre of the city.

It was now evening but I went to just find where it is. It turned out to be one of those typical buildings in China that looks like it was only built ten years ago but was either never fully occupied or all the businesses inside have closed up and moved out. There was no sign anywhere that mentioned Myanmar or any consulate and no sign in the Burmese language, which I can recognize. The glass doors I could see through seemed to have deserted offices.

Has the consulate moved again? Is it kind of hidden within this building that other occupants have left and with no sign? What's going on?

It turns out two of the addresses refer to the same place! The site must have been redeveloped recently with new, internal roads.

The consulate is not located in a park as it seems from Google Maps. I believe the area is a special consular zone. It seems to only contain a Lao consulate and a Myanmar consulate so far. There's also an official Chinese office of some kind there. The rest of the land is just grass and a couple of roads waiting for more consulates to be erected.

So the special zone seems to be at the old 6800 Caiyun Road North address and the Mynamar consulate is now at the new 99 Ying Bin Road address, within the zone. (Here's a Google map showing the walk between the old and new street addresses.) If you're arriving on your own, you can forget looking for either street number. 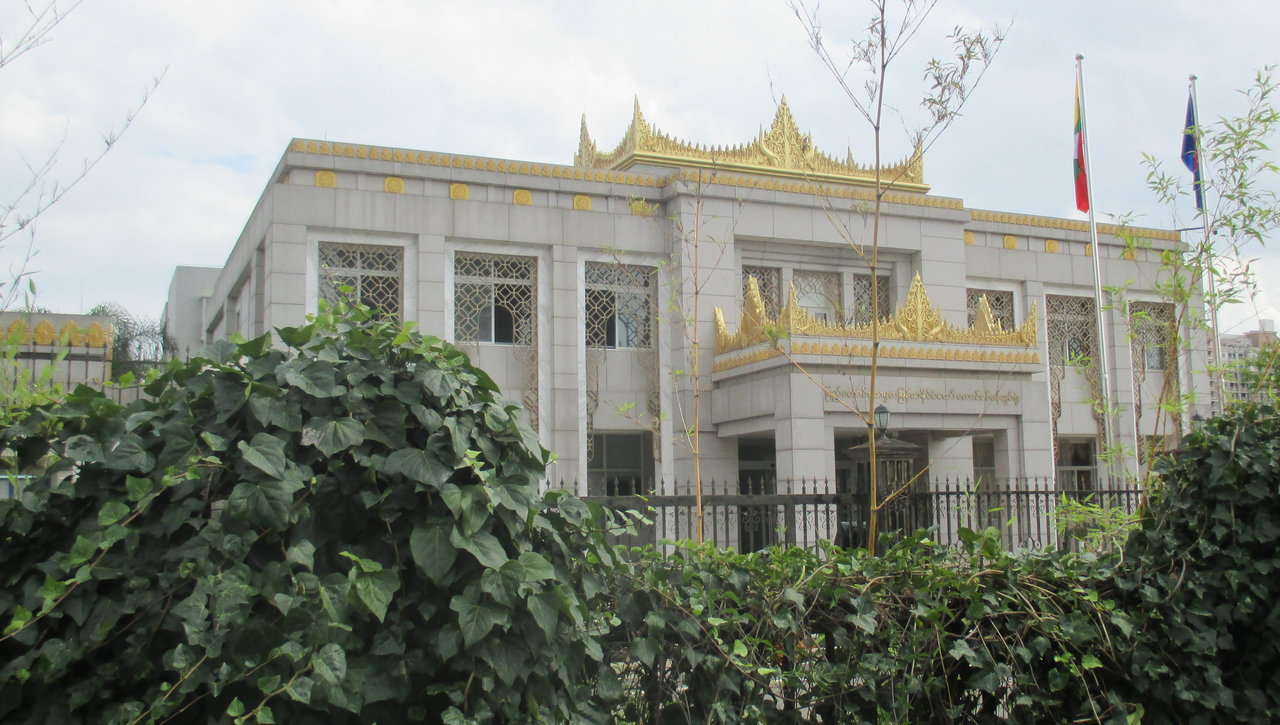 But there are much more useful landmarks. It's right at the brand new Erji Road (珥季路) metro station, which is walking distance from a gigantic shopping mall with a Carrefour.

Thanks to the metro you also don't have to worry about taking a bus or taxi. It costs just ¥4 CNY to get there from Tangzixiang (塘子巷) metro station, which is about a 15 minute walk from Jinma Biji Square, the centre of Kunming. The metro ride is about 20 minutes, 8 stops.

According to their website, the address is supposed to be

That's in a park, here, on google maps. The pointer description (缅甸联邦驻昆明总领事馆) stands for "Consulate General of the Union of Myanmar in Kunming", so you might want to look for that sign from the outside to be sure. The Chinese address (昆明官渡区迎宾路99号) matches the English one on their website too, FYI.

It might be worth while calling them before going there, at least to be sure about opening hours. Given the very nice location with a pond and inside that park, I would think that this is the correct and permanent location of the embassy.

Copy the characters I gave above and give it to the cab driver. Cab driver MUST know it, don't bother with the bus.

Not the answer you're looking for? Browse other questions tagged china consulates locate-this myanmar or ask your own question.

15
Do I have to visit the Chinese consulate in person to get my visa?
4
Where exactly is the London Shoreditch National Express Coach Stop?
9
How to find places with Wi-Fi and electricity in China?
9
What is the driving time in a car from Zamyn-Uud to Ulaanbaatar?
8
Where exactly does the ferry depart from in Mawei, Fuzhou, China that goes to Matsu, Taiwan?
5
Which cities in Vietnam have a Chinese embassy or consulate where I can apply for a visa?
19
Where exactly is this building located in Cuba?
5
Can I travel to Burma/Myanmar over land across the border from China?
2
Where exactly is the night market in Jinghong, Xishuangbanna (China)?
4
Are six and twelve month multiple entry Chinese tourist visas currently being issued in Australia?