Is it safe to drive at night in the Canadian Rockies?

As part of a road trip, I am thinking of crossing the Canadian Rockies by car during night time, from Banff, AB to Kamloops, BC.

I am aware that some areas in Canada are not recommended to be driven through at night, mostly because of large animals that may cross the roads. Is it the case of this section, in the middle of the Banff National Park, or can I drive through it by night with a "regular" sedan car without worrying at all?

One big problem here is that deer, elk and moose can't read. They don't know or care about national park boundaries, highways, etc. And a moose can weigh half as much as your car; if you hit one, your car will probably be totaled - and the moose might even walk away!

If you'll watch that video (and this one), you'll note that collisions can even happen in daylight; the moose can literally come out of nowhere before you have a chance to see them. At night it's very possible you won't even know there is a moose there before you hit it, if it is looking away from you as you drive toward it.

Note that while there are more and less populated areas, you can find a moose virtually anywhere in Canada below the Arctic Circle. This includes within towns and cities, so don't let down your guard simply because you arrived in a town somewhere. 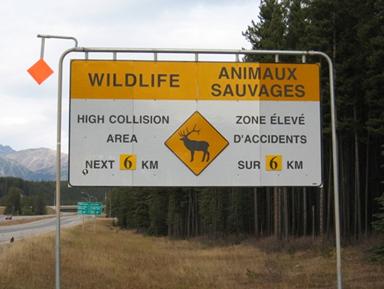 While roads in the areas with high moose activity will have warning signs, as I mentioned before, moose can't read and may try to cross the road practically anywhere. You should drive cautiously on this route even in the daytime. 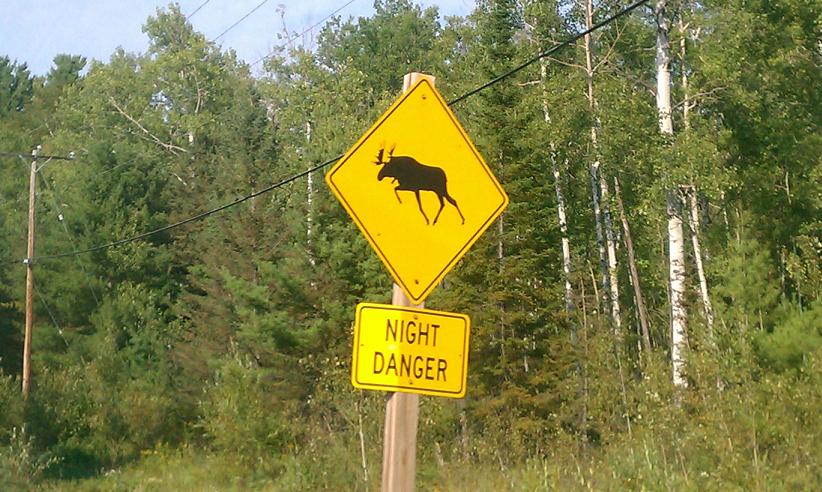 If you do drive here at night, the advice I have heard given most often is to carry a passenger who can watch the roadway and help you spot animals who may be on or near the road. If you haven't got a passenger, watch for reflection from their eyes, which you may be able to see from a long way off.

Is it safe to drive at night, yes. But one has to ask, why drive it at night, it is a beautiful route that should be driven during the daylight hours to be enjoyed.

Driving through any of the western mountain ranges in North America requires a bit more attention to the road ahead of you, keeping an eye out for wildlife that may wander into the roadway. Fortunately highway departments are widening the route through the forest, cutting the trees and brush back quite a ways from the highway itself, providing a bigger gap between the forest's edge and the road. Of course the downside to this is that more grass grows in the clearing which attracts animals for grazing in the evening hours.

While the area you are driving through is inhabited by big animals: deer, wapiti, moose, bison, bear, etc, they are not a reason to avoid driving at night. Just keep your eyes open, stay alert and quit driving if you feel the least bit sleepy. Or better yet, drive through in the daytime and enjoy the view.

Qualifier: I used to live in Calgary and have driven Calgary-Vancouver many times.

As well explained in other answers, there are wildlife on the roam. But it's the mountains which adds rockfall and cliffs to the equation. The mountains can easily drop a rock the size of your kitchen table onto the highway at any time, and in some places you have the combination of single-lane traffic, tight turns and "sharp drop off pavement edge" means it's a looooong way down. They'll find your wreck in a day or two.

You can easily do Calgary to Vancouver in 12 hours. The enroute scenery is quite spectacular, and if you want to make a few stops on the way, Revelstoke or Kamloops are good mid-points.

At the west end of the drive, skip the Coquihalla Highway (#5) and use old Hwy 1 through Cache Creek and Lytton. Much nicer views and all the trucks and RVs tend to stay on the new road.

Never drive in the night from Kamloops to Revelstoke, the road is one line and the truck lights go directly to your face and the road lines hard to see because of that.

Not the answer you're looking for? Browse other questions tagged safety driving night-transport british-columbia canadian-rockies or ask your own question.

8
Is traveling by train in the night in Morocco safe?
16
Is it safe to drive the Baja Peninsula?
5
Is the Great Dolomites Road safe to drive in October?
9
London night bus safety
3
Weather to expect first half of September, British Columbia,Canada
5
Does night-driving-friendly, polarized eye-wear exist?
35
How to deal with a fear of driving?
10
Is traveling by bus during the Halloween night a good idea?
5
Does this painting depict the Alps or Rockies?