Where can I try konoko and konowata in Japan?

Apparently sea cucumbers are quite a delicacy in many Asian countries. I was wondering if anyone knows of good places to try konoko (dried sea cucumber gonads) and konowata (salted intestines) in Japan, or if there are good places to purchase them?

japan food-and-drink restaurants
Share
Improve this question
edited May 24 '15 at 23:25

Konoko (more commonly kuchiko) and konowata are both examples of chinmi, strong-tasting delicacies intended to be eaten in small quantities as an accompaniment to liquor. There thus aren't any restaurants that specialize in them, they're more the kind of thing you will (or will not) find on a rotating menu of today's specials. But here is one random manufacturer, Kikumoto, which makes and sells both online, from ¥1800: 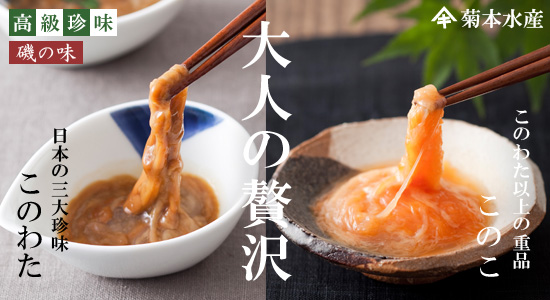 (Yum yum! Konowata on the left, konoko on the right. Publicity photo courtesy of Kikumoto.)

And a personal note: I consider myself a reasonably adventurous eater, but konowata holds my record for being the most disgusting thing I have ever had the misfortune of sampling: merely licking the tip of a chopstick was enough to trigger the gag reflex. Many Western travellers to Japan have the same reaction to most types of shiokara, the class of fermented fish gut pickles that both konowata and kuchiko exemplify.

Not the answer you're looking for? Browse other questions tagged japan food-and-drink restaurants or ask your own question.

14
Bringing a camping knife to Japan
6
Are there any ferry tickets /passes in Japan that cover multiple ferries between multiple islands?
13
Does Japan have pubs or bars?
10
Resource for local cuisines and specialties across Japan
2
Where can I try sea cucumbers in Taiwan?
14
Are Ginkgo trees in Japan rare and if so, where can I find them?
12
How to eat a meal with locals in Turkey?
4
How/Where do I make local friends in a short-term (1 month) stay in Japan?
7
Japan - Any places similar to Midnight Diner?