Traveling from Chicago to Houghton/Hancock?

I am reaching Chicago O'Hare airport around 8:00AM Monday after an arduous 15hr flight and am carrying two 23 kg bags. I further need to go to Houghton/Hancock whichever is convenient.

Is there a better travel option for me?

PS: If it helps somehow, I am accompanied by my friend who is in a similar state as mine.

Upon revisiting this question some hours later, I think the real problem is that you are selecting the "wrong" Houghton. Greyhound's search engine recognizes three possible Indian Trails stops: Houghton, MI, Houghton City Center, MI, and Houghton Little Caesars, MI. I didn't look at the trip details closely enough in my initial search, either.

If you do open the schedule details, you'll find that the main portion of the trip is actually identical for all three: the overnight itinerary Karlson mentions, departing at 19:15 from Chicago, transferring from Greyhound to Indian Trails in Milwaukee, and arriving in Houghton at 08:42, about 12½ hours including a 52-minute rest stop in Escanaba. Two minutes later, you are at Houghton City Center. 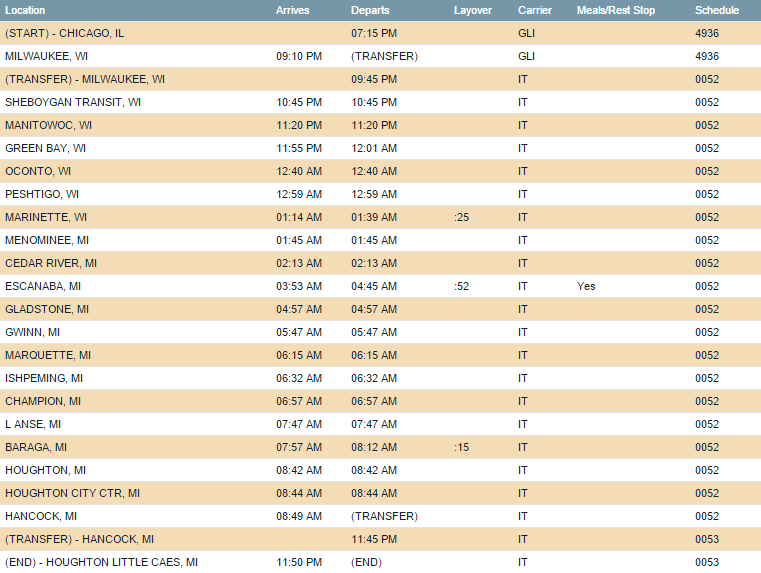 The reason why Greyhound gives you the long "as Fast as 1 Day 3 Hours 35 Minutes" is because there is only one bus that stops at the Little Caesar's— running in the opposite direction— and so after arriving in Hancock at 08:49, you have a "layover" of 15 hours until it departs at 23:45, arriving at 23:50!

So, perhaps you will be able to take the bus after all, as the trip is less than half as long as it appeared to be at first.

(Original post; availability of the shorter bus trip makes that the better option, though I would still recommend looking into adding a flight connection).

Houghton, Michigan is quite remote from major cities. Most visitors there are headed for Michigan Technological University, and as such, the advice Michigan Tech provides to visitors on its directions to campus page is reasonable. They identify your car, plane, and bus options— which are few.

Thus, while you object to the cost of a flight, this may prove to be the best option you have, and not necessarily much of a premium over the alternatives. You could

In either scenario each of you may incur a change fee plus fare difference on your flight, which could be quite significant. With the bus, you have bus fare for each person, plus your meals. With the car, the travel will take much less time (about 8 hours from Chicago), and thus fewer meals, and you can split the cost of the rental, fuel, and insurance, as well as driving responsibilities, with your traveling companion. On the other hand, you will be traveling on country roads, for a considerable distance, driving on the opposite site of the street from India (where I assume you are traveling from, based on your profile). A night of rest in Chicago after your long flight is certainly recommended, and you'd need to split that room as well.

Another alternative is to investigate flights into other cities in the hopes of finding a better mix of options. But you'd still need to pay bus fare or car rental fees when you arrive. The Indian Trails route map suggests no direct routing is possible from Duluth, which is the nearest place that could be called a metropolitan area (pop. 300,000), though if you were driving, it would only be half as far as Chicago. Connections to Marquette, Sault Ste. Marie, or even Green Bay are also worth checking, but fares may be no better than flying to CMX outright.

The local tourist bureau, the Keewanaw Convention & Visitor's Bureau, unfortunately provides no additional transportation suggestions on their website, but might respond to an email or phone message left with them.

You might also try your luck on public carpooling boards, such as the Northwest Michigan Ride Share Connection. The availability of rides is highly variable, and there are various risks associated with depending on a complete stranger for a ride over such a long-distance. At least with the rideshare websites, you have a chance to read reviews of drivers that previous riders have left, which is more than can be said of ride requests posted to places like Craigslist.

While you have ample time between landing at O'Hare Airport in the morning to get to Milwaukee Intermodal Station for the evening Indian Trails departure, you might want to save yourself traveling the wrong direction into downtown Chicago to the main Greyhound station or train station.

Not the answer you're looking for? Browse other questions tagged usa tips-and-tricks chicago michigan or ask your own question.

8
What food is Chicago (USA) famous for?
3
Parking south of Chicago near CTA to central Chicago
1
Local transportation from/to ORD Chicago Airport?
4
How to travel from Cedar Rapids to Chicago by bus?
1
Flying from Cedar Rapids to New York via Chicago, don't want to miss the sight seeing of downtown Chicago
4
Is it possible to stay overnight at Chicago Airport?
14
Downtown Chicago car free bike ride?
2
Chicago Museum Campus