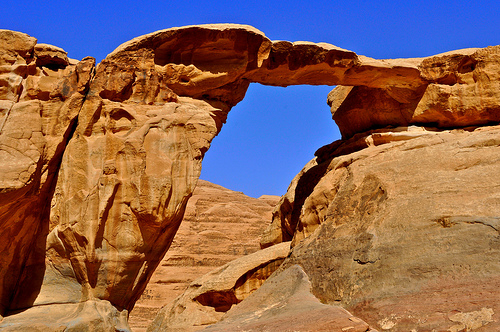 Wadi Rum seems to be quite an other-worldy place from pictures I've seen. Unfortunately, it's the sort of place that I cannot see on foot and as a budget traveller, I'd need to go on an organised tour to see the sights (hiring a private car would be prohibitively expensive!). I've searched online and most sites quote prices for jeep tours with an overnight stay at a Bedouin camp which costs 35-60 JOD.

I'm not interested in the overnight Bedouin experience. Are there any organised tours half/full day just on a jeep, and how much do they cost for a solo traveller?

What I found at Wadi Rum was that since it's a protected area where only the Bedouin can live, the only way in is to sign on to one of the tours. Most of these camps and tours are owned and organised by the Bedouins themselves. Prices are very standardised because it's regulated by the government, and since the only way in is a tour, you might as well book it online. By that, I don't mean book through a third-party site like Viator. Search around on Google and you'll find enough tour / camp operators you can email or book with directly. You can do this when you get to Jordan to, but you get the same price.

As for the cost, I found some operators that are cheap and operate groups - these basically put at the back of an open pickup truck, you pay around 60-80 JD for your group, and you get to bake in the open sun / shiver when it gets cold - I saw loads of pissed off faces on those pickup trucks. The other option is to hire a 4WD which costs 80 JD for a day, which if you have a group of 3-5 people then it's not too bad (in Jordan) for one day. Make this group up in your hostel if you can, although it also depends which camp operator you're staying with as they all operate their own tours. (So yeah maybe if you're a couple / travelling solo, it makes sense to 'team up' with someone in Jordan.)

The 4WD tour operators (as opposed to the pickup truck ones) are often more comfortable and the guides speak better English (and a surprising number of other languages too!), I guess because they have been working long enough and good enough to be able to afford to level up their operations to 4WDs.

Now, this is a travel hack that won't work for everyone. I was travelling solo and I want to go directly from Amman to Wadi Rum - while most other people I met at the time were going Amman to Aqaba to Wadi Rum. I did meet some people on the public bus from Amman to Wadi Rum who were with a different tour operator though. Anyway, I decided to hire the 4WD solo...and it turns out my guide / driver was a huge fan of Bollywood, so he charged me only 35 JD for the day, and instead of sticking to the 'set' tour route, allowed me to pick whatever route I wanted - including driving around at night when technically they are supposed to all head back to camp. Hiring solo? Best. Decision. Ever. Sure, I ended up paying slightly more than I would have in a group but I got to set my own route, pace, and had a chatty, informative guide to boot.

You can consider Private Tour from Viator

You can also consider the following WadiRumTours Site as it has multiple options for Wadi Rum Tours on a 4x4 including full day and part of the day tours.

This one should work as well.

Not the answer you're looking for? Browse other questions tagged tours jordan off-road or ask your own question.

17
"Lord of the Rings" Tours in New Zealand
9
Walking tours in Seoul
5
How to find an organization that offers semi-guided tours?
4
Are there flight tours over Antarctica?
5
How to find operators of Panama Canal transit tours
10
Walking tours in Holland
5
Process for booking an AWD/4WD car online
18
Are there tours that let you touch Stonehenge?
5
Saudi Arabia business visa with Wadi Araba border crossing stamp?