I'm arriving at LAX, and my friend has accommodation basically next to John Wayne Airport in Orange County.

My research indicates that it'll take about 4 hours by public transport.

Is there not a shuttle or something between the airports that I could use? Or an alternative, faster method of transport that won't break my wallet? (I assume a taxi is going to be horrendous).

My favorite way to get between the two used to be on a United Express Embraer-120 operated by SkyWest, which gave you a grand aerial tour of the LA basin and, at the time, 500 frequent flyer miles for 34 flight miles. Sadly, those flights were discontinued some years ago.

As with DAL-DFW, MIA-FLL, or HOU-IAH then, the most direct and economical LAX-SA transfer would be a shared van service (if traveling alone). At present, SuperShuttle and Prime Time Shuttle are the concessionaires. SuperShuttle's website quotes $36 for the first passenger and $9 for each additional passenger.

There are two main problems with shared vans, at any major airport:

Still, at $36 (and $1–2 for the driver for each bag s/he handles) and a couple of hours, this is probably the best trade-off you will find.

If you want an exclusive van, the charge is $95 total for up to 9 people, though if it's privacy and directness you need rather than capacity, you might as well book a taxi or ride service.

According to TaxiFareFinder.com, a one-way metered taxi ride from LAX to SNA is about $135, which includes the $4 airport surcharge, $113 fare, and $18 tip. Unfortunately, almost the entire length of the trip will be along the notorious 405 freeway, which is unpredictable. Thus, your fare could end up $10-15 higher, and range from 45 minutes in ideal traffic conditions to double that in bad traffic.

Uber and Lyft charges vary according to demand and driver availability. Right now (Monday around 9am Pacific Time), the low-end UberX is quoted at $46-61, and the super high-end UberLUX $233-303.

The FlyAway bus, a flat $8, is the easiest way to get to downtown Los Angeles from LAX via public transportation. Now, DTLA is in the wrong direction from where you want to go (northeast as opposed to southeast of LAX), and a good 45 minutes away, but if you have time to kill and want to save a little money, this option is not entirely crazy.

JoErNanO has already pointed out the possibility of going via Disneyland using Southern California Gray Line. Competitors include Mickey's Space Ship Shuttle (put on sunglasses before opening that website) and Disneyland Express. As the Disneyland Resort is a common destination from both airports, you can piece together a trip

The downside is that Disneyland is not along the most direct route from LAX to SNA, and thus you will spend more time, and risk more traffic jams, traveling to and from Anaheim. Additionally, as JoErNanO has also pointed out, these services are not primarily aimed at inter-airport transfers, so the schedules will not be coordinated, and you may end up waiting a good while at Disneyland's bus depot, which is notably less magical than the park.

I would suggest a shared-ride van.

At the airport, they put you in a van with several other people whose destination is in the same vicinity as yours, and then take all of you to where you are going. You get door-to-door service like a taxi but for much cheaper. Of course it is somewhat slower than a taxi because of the extra stops, and you may also wait a little while at the airport while they try to accumulate more passengers for your van, but usually it's a good trade-off.

At LAX there are two such companies operating: Super Shuttle (national chain) and Prime Time Shuttle (smaller company). Super Shuttle is quoting $35 (USD) for a one-way ride from LAX to SNA, and Prime Time says $34. You can either book online or just walk up to their desk at the airport; sometimes there is a modest discount for booking online. Tipping is optional; if you want to, you can either charge a tip to your credit card, or hand cash to the driver. I usually tip 10-20%.

It's hard to predict how long it might take, especially given LA traffic, but I would guess you'll reach your destination in under two hours. Maybe closer to one hour if you are lucky.

Rome2Rio says that you can be there in 2 hours using buses, for a total approximate cost of 48 - 53USD. The journey includes taking a Gray Line AH bus to Disneyland Hotel, followed by another Gray Line AH bus to SNA airport. This is a somewhat unorthodox approach, and might not be compatible with your departure and landing times, since it seems that the services run in synchrony with Dysneyland opening and closing times. At the time of writing, the combined price for a single journey LAX to SNA costs 50USD (30USD LAX + 20USD SNA).

Below is a screenshot of the Gray Line schedules from LAX to Disneyland Hotel, detailing pick-up modalities and times: 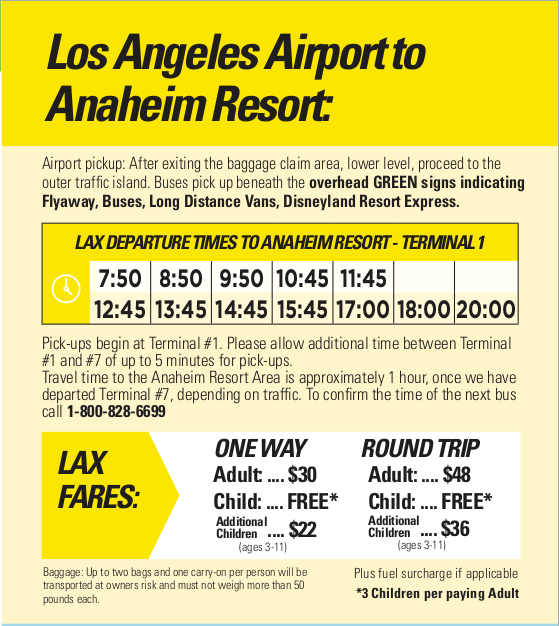 Once you get to Disneyland Hotel, you have the following choice of outbound services to SNA airport:

Not the answer you're looking for? Browse other questions tagged public-transport airport-transfer los-angeles lax sna or ask your own question.