Can I visit Chicago during a 5.5 hour layover in O'Hare?

I will be flying from Boston to Tokyo with a 5.5 hour morning layover in Chicago. I'm thinking of going out to the city for some late breakfast and/or sightseeing. I've never left an airport during a layover before, so I have some questions.

Assuming you arrive in the domestic terminal and leave from the international one, I would first go over there and try to check in early, just to get that out of the way.

It is always risky to leave the airport and get into suburban traffic when you have to catch another flight, especially an international one.

Your time is limited and I wouldn't spend too much of it in downtown. However even getting there is interesting enough. I would suggest just taking the Blue line from O'Hare to Clark/Lake (1h), then go up and change into the Pink line, this is an elevated train 'The L' that goes around the loop, so you have some views over downtown Chicago. Get off at Washington/Wells and walk back to Clark/Lake (5 blocks) to get back on the Blue line to O'Hare (1h). With only 2.5 hours to spend, this is a very tight schedule. 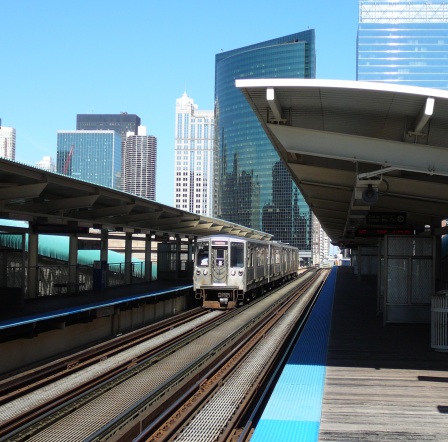 To make things worse, the Blue line leaves from near terminal 2, to get there to/from terminal 5 takes at least 15 minutes each.

I would only try this, if you had checked in already, so that when getting back to the airport you would only need to go through security and to the gate, meaning you don't have to be back at 11:30 but maybe at 12:00 or even 12:30.

It would be easier if you could check in through to Tokyo in Boston and don't have to worry about luggage and checkin in O'Hare.

You could also not go downtown, but just look around one of the West Side neighborhoods for a short while. Just take the Blue line to Belmont or Logan Square, spend some time there and then go back. There is nothing too special there, but you can get a feel for Chicago outside of the loop.

TL;DR: While it probably would be possible for you to get downtown, see one or two things and get back, I would recommend settling in with a good book/iPad/kindle and get some movie watching/reading done. O'Hare is a terrible place to get in and out of.

I imagine I'll leave the airport by 9, and should be back by 11:30. Is this reasonable?

Assuming that you even can leave the airport during this time...To go downtown, not likely. You'll be past most of rush hour, so via taxi with absolutely no traffic you can get downtown in 25-30 minutes. If there is any traffic at all it will be 45 minutes to 1+ hour(s).

How much is a Taxi to downtown Chicago?

As an alternative to downtown, is there anything (food/sights) you can you recommend that's closer to the airport?

If you do leave, you can take the Blue line (train, $2.25) one stop to Rosemont and there will be restaurants around there, however it is mainly large chains, hotels and office buildings so you won't really get a good feel for the city.

As for your luggage, I'm not sure, but unless your connecting flight is taking care of your baggage for you, you may just need to hang on to it. I believe most airports stripped out their luggage lockers after 9/11.

I fly through O'Hare a lot, from a US domestic airport, to the UK. Typically you won't even see your checked luggage at Chicago, as long as you are travelling on the same airline/alliance (note: this is not true when flying in the other direction, i.e. when coming from a destination outside the US, as you need to go through customs, then "re-drop" your luggage - which is normally already tagged for your final destination - at the re-drop desk).

Assuming you get both boarding passes before you leave Boston, which again should be easy if you are on the same airline/alliance, you can leave the airport as soon as you get to Chicago. The only trick is to make sure you get back to your departure terminal in time to go through security. Chicago sometimes gets very busy - I would leave up to 1 1/2 hours for that, even 2 if you are nervous.

As others have suggested, the Blue Line to a suburban neighborhood might leave you more time to enjoy things than going into downtown.

Not the answer you're looking for? Browse other questions tagged chicago layovers ord or ask your own question.

1
What to do in Chicago during an 8-hour stopover?
3
How to manage 12+ hours stopover in Chicago?