Are there any drinking water fountains/taps in Paris Charles de Gaulle airport?

I'm not a big fan of spending 3EUR for a 250ml bottle of water, hence the question: are there any drinking water fountains/taps in Paris Charles de Gaulle airport, be it airside or at departures/arrivals level? Ideally I would like to either drink directly from the tap/fountain or refill an empty water bottle.

Using the taps in the washrooms at CDG might not be an option, since these dispense tempered (warmish) water suitable for hand/face washing. Moreover they are sensor-activated and provide a relatively slow water flow which could make refilling a bottle a tedious process. Below is a picture of a washroom at CDG, courtesy of Karen Bryan on Flickr: 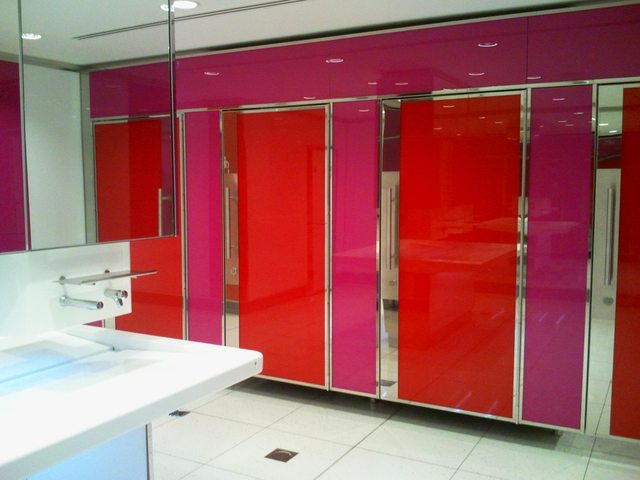 Yes, but not everywhere.

Below is an image of what the water fountains look like at the airport at the time of writing (07/2015): 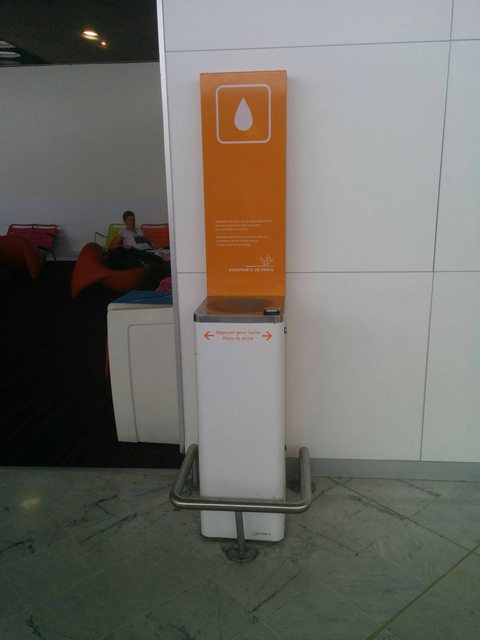 Apparently, the fountains are used in other airports - but I found another mention of it in this video, which also attributes it to CDG. It is a side view, but it matches up.

The fountain (I’ll try to post pictures) was a tall, orange thing with two buttons on each side, like a pinball machine, and instead of a spout, a metal disc with no clear hole. I saw some savvy French woman get a sip, but when I tried I had no luck. I pushed the left button. A blue light turned on, but no water. I pushed the right button. No change. I put my phone down and pushed both buttons. A different blue light went on. I was totally confused, and still thirsty.

Where Are the Fountains

Recent, hands-on experience with the airport show that drinking water can be found in the following locations:

(Please edit if you have information about other areas) 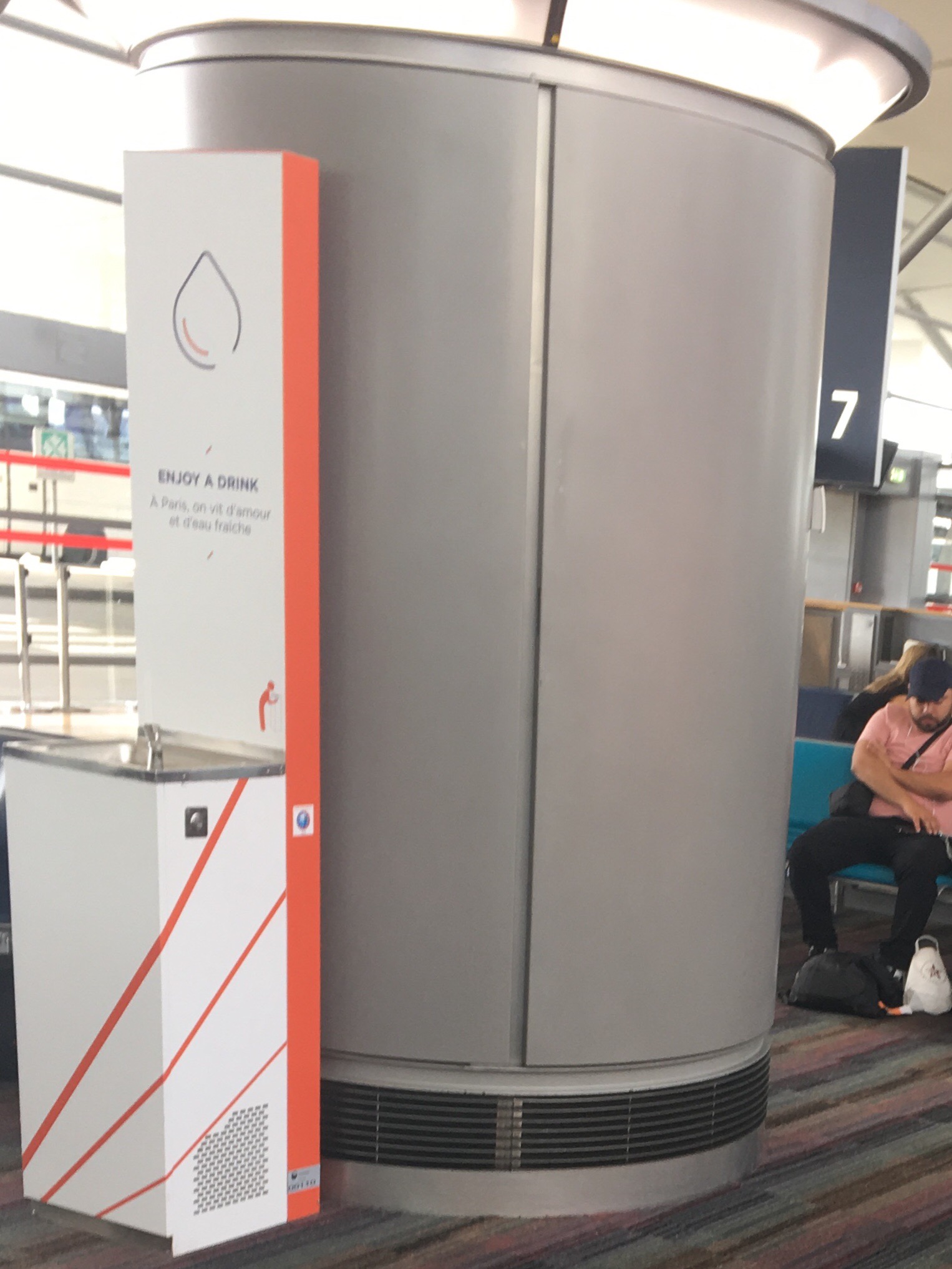 I found another water fountain at terminal 3 (for budget airlines) between gates 7 and 8.

I found another water fountain today, also at terminal 3, Hall A, but between gate 3 & 4. I think this is a different part of the terminal to the one at gate 7 above, which I think is only accessible via Hall B, so it’s worth mentioning here.

And an additional update, as of January 2018, there is this water drinking fountain in CDG Terminal 2E, located near gate K34: 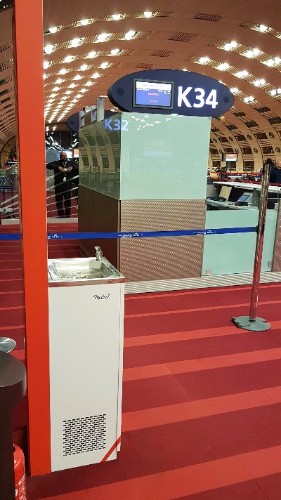 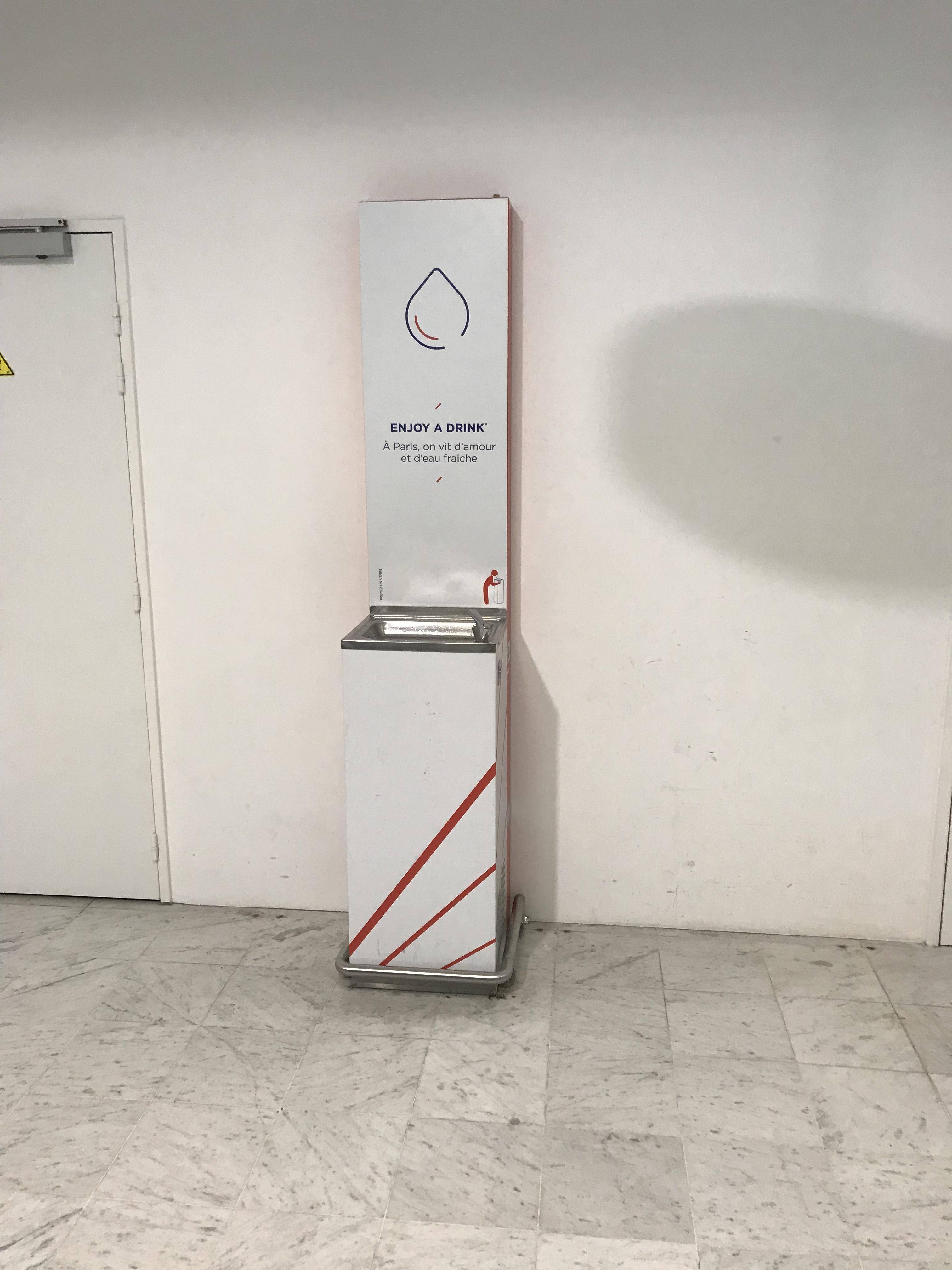 Found this one near gate T2A-A47. Climb up the stairs and on the way to the restrooms you will find one past the closed smoking cubes

Not the answer you're looking for? Browse other questions tagged food-and-drink paris tap-water cdg or ask your own question.

27
Is there a website to find points to get tap water at airports?