Is there a South African equivalent to Greggs?

Apologies for the random question! It came up in office conversation.

Greggs is a low cost Bakery chain in UK. My colleague was concerned that, should he visit South Africa, he would not be able to find the vital sustenance he gets from his daily Greggs, or a local equivalent - i.e., to make it more pertinent to travel, how alike are South African and British culinary habits?

I love this question! Really, the FCO should include "Closest local equivalent to Greggs" alongside its safety and visa information for every country. It's essential information :-)

There are quite a lot of Greggs-like pastry-heavy bakeries in South Africa. One widespread franchise is King Pie, who are quite Greggs-like: (pic from WikiVillage) 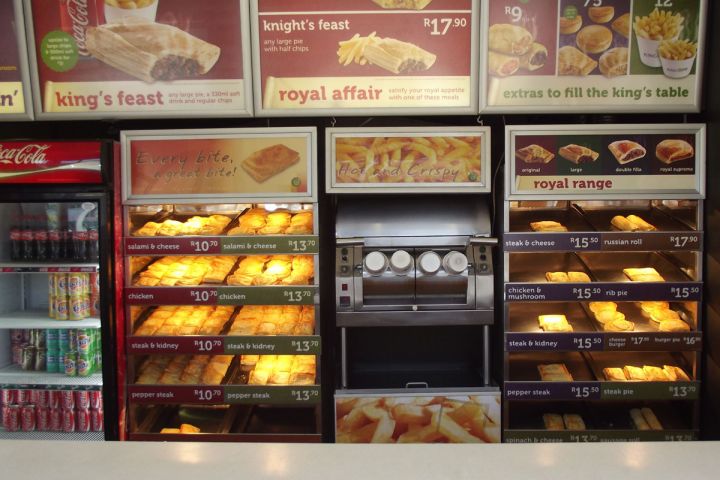 Their "steak pie" pasty should cure any Greggs addict's Steak Bake withdrawal, and the Steak and Kidney pasty is possibly more Greggs than Greggs itself.

FYI, in South Africa, a "Russian" (like in "Russian roll" in this image) is basically a large frankfurter-type hot dog sausage. Apart from that it's all very familiar, but if you want a cuppa with your pasty, ask for "Ceylon tea" or "Five Roses" as "tea" often defaults to rooibos and "black tea" sometimes causes confusion (on occasion in KZN I asked for black tea and they didn't recognise the phrase and gave me black coffee instead - I suppose they thought "black tea" must be like the opposite of "red cappuccino").

There are also many stands serving Greggs-like recently baked, rapidly cooling pasties in the shops next to petrol stations on main motorways. I didn't catch the names, but at least one "Bonjour" shop at a Total station had one of these.

Finally, you can also get freshly baked pasties at some large supermarkets' in-store bakeries, including Woolworths, which in South Africa is an upmarket Marks & Spencer-like supermarket/department store chain.

South African Woolworths is a bit more swanky than Greggs though: (image source) 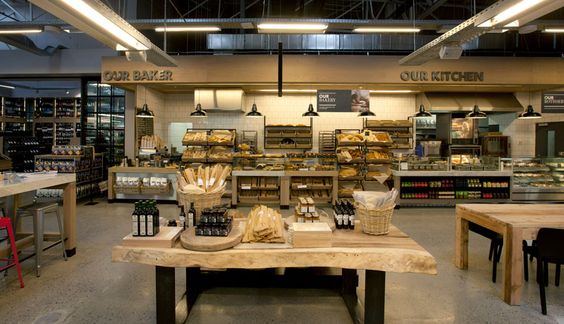 Not a South African, but I have family there.

Piemans Pantry is a very popular brand in South Africa. The products are also available in supermarkets.

In North Krugersdorp (in Gauteng and near Johannesburg), we got pasties and meat pies from a shop that is owned by a family friend called The Food Farm with a connected The Factory Shop. The Factory Shop is open Monday - Friday 8 AM to 5 PM and Saturday 8 AM to 1230 PM and is at 62 Kingdon, corner of 4de (4th) St. The building has a sign for Chapat's Food Farm. The Cornish pie was wonderful.

I'm not sure how pies can be vital sustenance to be honest they are pretty unhealthy as these things go but I would not worry about it. Most petrol stations have some sort of convenience store on the premises and it is all to likely they will be selling some sort of "gemors kos" like pies and sandwiches.