I am going to travel to Penang soon and on my list of things to do is seeing the murals there. I always see a lot of pictures of street art (such as the one below), and want to make sure I can see as many of those as possible. 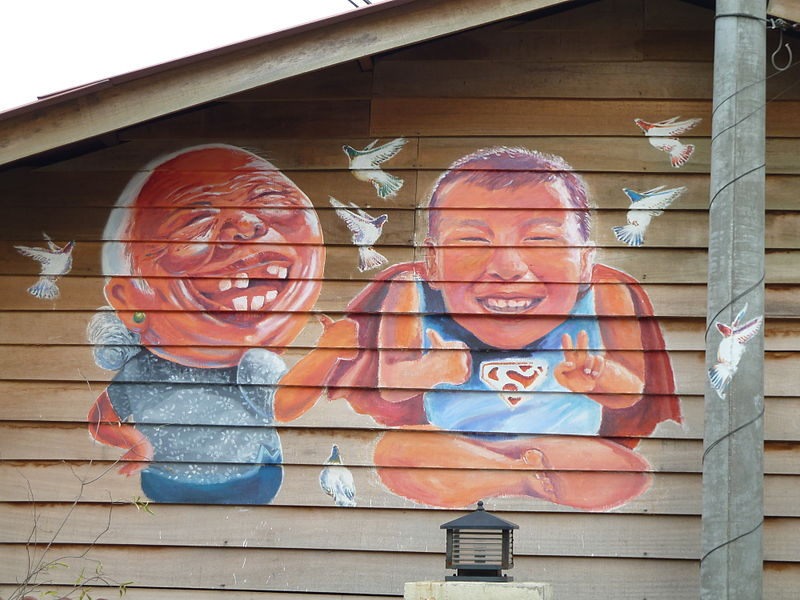 I found the brochure by the tourism office of Penang, but it doesn't seem to include a lot of the murals, such as for example the one on the picture above. I also found on list with links on Google maps, however this is not very friendly to print.

Is there a more complete printable list or map of the murals that I can take with me on my trip?

I am back from Penang and want to report on which resources were useful to find the street art in Penang.

There are several maps available locally. I picked one up at the airport, just before customs, but we also saw them at the hotels and some of the mayor attractions. The best one I found seemed to be a map version of the official brochure that is available online. It was more up to date and includes more murals.

Note that there is at least one other map which is less complete and serves as an advertisement to the local trickeye museum, so watch out as some of the art pieces on the map are actually located inside the museum.

Overall most complete resource we found was still the online list on Google maps. It is a bit awkward to print out as the list will cover most of the page as a legend when printed, so I printed screenshots of the map at a zoom level where it will show the street names. Note that the map will just show you where the murals are and not which ones they are, (unless you use it on a phone or tablet) so we found it useful to cross-reference them to the official map to sort those out that we knew we didn't want to see (we were more interested in the painted murals rather than the wire sculptures).

All in all finding the street art was easier than we expected and definitely worth the hunt. It can be easily done on your own, without hiring a guide or something. It would have been very difficult though without the maps, so do prepare your trip. Also note that you might not be able to find all the murals you have seen online, as some of them (especially those at the jetties) have deteriorated beyond recognition.

Not the answer you're looking for? Browse other questions tagged malaysia locate-this or ask your own question.

12
Where is the museum of socialist art in Sofia, Bulgaria?
9
In Bacau, Romania, what is the current name of the street that used to be called "Filimon Sirbu"?
6
Contact Fisherman Guesthouse in Penang
14
Is the carrying of knives in the street regulated in Malaysia?
0
When flying Singapore->Kuala Lumpur->Penang, where is immigration cleared?
2
Where can I find a list of food items restricted to bring to Malaysia (for personal consumption)?
1
Is it safe to drink tap water in Penang?
4
This Alpine town?