Are there any car rentals in Europe that can be picked up in one country and dropped off in another? [closed]

Ask Question
Asked 7 years, 3 months ago
Modified 7 years, 2 months ago
Viewed 575 times
3
Closed. This question needs to be more focused. It is not currently accepting answers.

I want to rent a car in Europe (London, Amsterdam, Dublin, Paris) and drop it off in another country.

How does the border crossing work with a rented car?

Taking rental cars across European borders is not particularly difficult. You do need to check with the agency exactly what they allow. Cars are typically approved in the whole EU and private insurance also covers many countries but rental agencies have additional restrictions (e.g. higher-end cars often cannot be taken to Eastern Europe) and might require you to inform them in advance and to get some extra insurance.

One-way cross-border car hire (picking up a car in one country and dropping it off in another one) is also possible with major international brands but there is obviously a (usually steep) surcharge and, again, a different list of allowed countries for each brand and each country (it does not always go in both directions; for example it's possible that a given agency allows French-registered cars to go to Germany but not German-registered cars to go to France).

In all the countries you mentioned, getting across the border itself is really easy. In the Schengen area or in the Common Travel Area, you will just drive through without noticing, with little more than a sign marking the border. 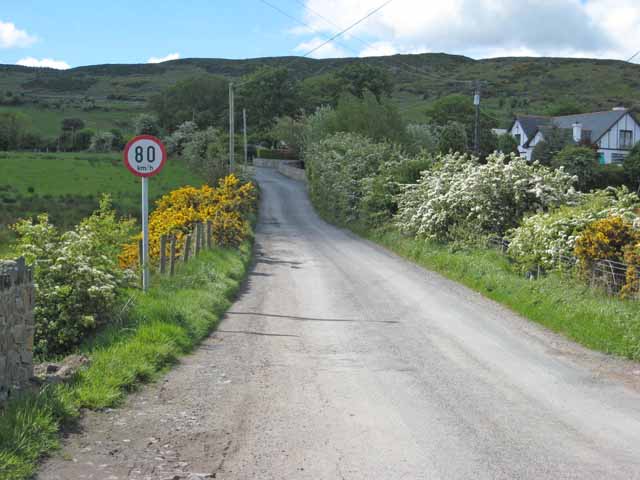 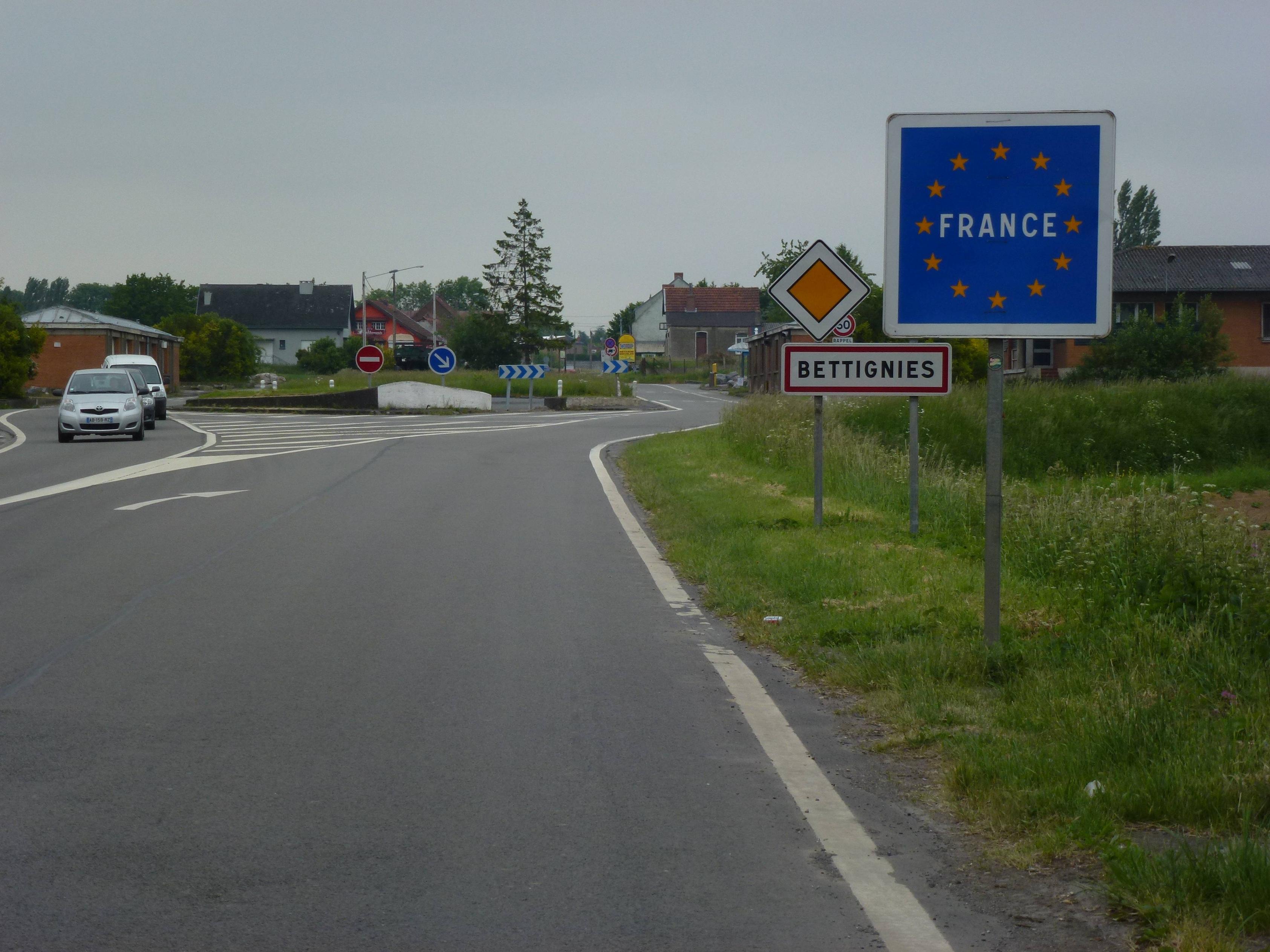 Border between France and Belgium, seen from the Belgian side

Between the British Isles and the continent, you will have line up for a passport check, without even leaving your car, for example when driving out of the ferry. It's more than 10 years since I last did it with a car, as far as I remember, border guards don't care about vehicles at all (no need to show the registration or prove you have insurance), they just want to make sure the passengers have appropriate documentation. 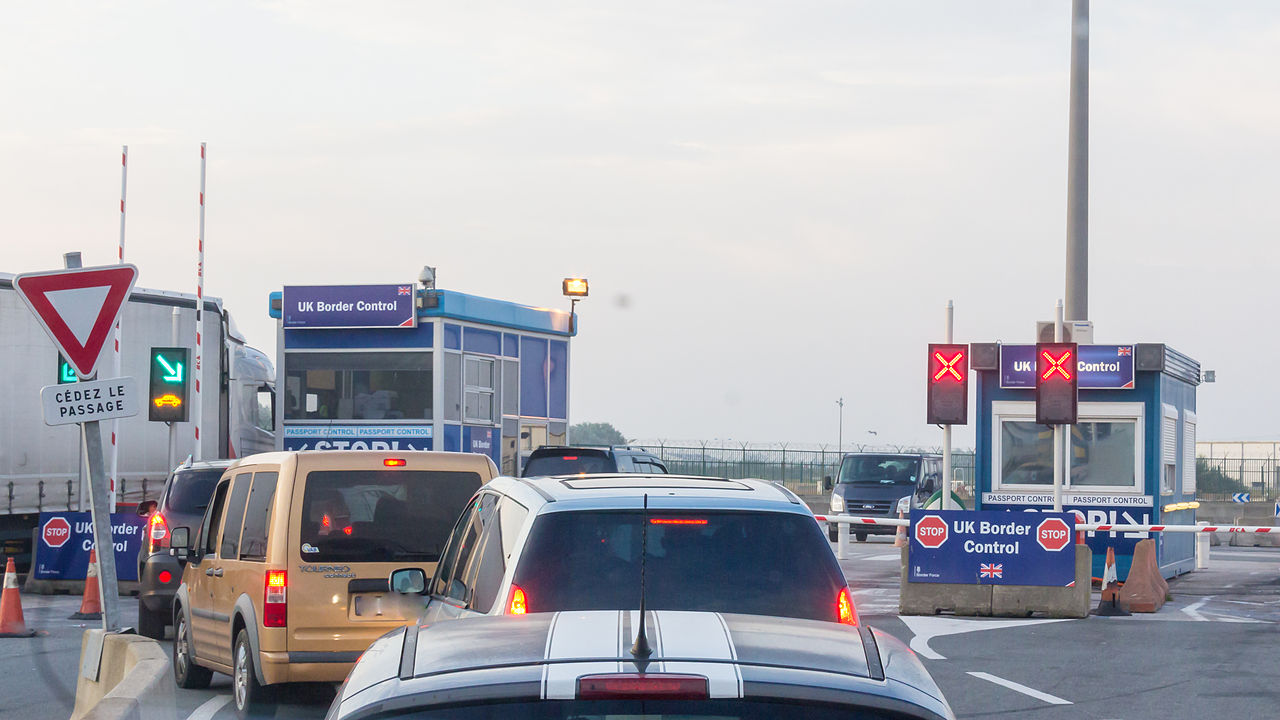 One issue is that it might be required to adjust your headlights when driving on the other side of the road but, in my experience, this is not enforced at the border and some French car hire agencies definitely allow you to take their cars to the UK.

Note that in Paris, London, Amsterdam or even Dublin a car is more an encumbrance than anything. So if you don't want to bother with all the issues I mentioned and save some money, you might just as well rent a different car in each country to explore the countryside and return it before visiting the cities themselves. Petrol is expensive in Europe so for one or two people, traveling by train or plane between the different cities in your itinerary will often be cheaper (for a family of four, road travel can be cheaper).

Not the answer you're looking for? Browse other questions tagged europe car-rentals automobiles borders or ask your own question.

0
Can I rent a car in Sevilla and drive to Portugal?
0
rent car from country to country

15
Is it possible to rent a car in one US state and drop it off in another?
8
Can you do the annual required technical control in another EU country than your own when doing a road trip in Europe?
17
Renting a car in Ireland & Great Britain: 1 rental or 2?
7
Recommendations on Car Hire and Train Travel for a UK trip in March 2013?
31
Why are round-trip car rentals much cheaper than one-way car rentals?
7
Is autolib' a good mode of transportation for tourists in terms of available drop-off points
11
How can I rent a car one way from the US to Mexico?
1
Why do rental companies ask you to record the mileage at the end of your trip?