How common is open carry of firearms in the USA? [closed]

This winter, I am planning to go to the USA for the first time. One of my concerns is the presence of weapons in public. I just came back from Paris and the sight of armed soldiers patrolling public spaces made me very uncomfortable (I come from a country where you can live for 100 years without having seen a gun in real life). So I'm wondering, in open-carry states, can you see people carrying handguns in their belts?

As Jonathan's answer mentions, pretty much all police officers open carry firearms in the U.S. (pistols on their belt.) Other than that, however, seeing people visibly carry their firearms is very rare in the U.S. (unless you're at a gun range or some such thing.) I live in one of the most gun-friendly parts of the U.S. and I almost never see a firearm carried openly in public, other than by police. Lots of people carry firearms, but nearly all of them carry them concealed where you will not see them.

It is also very unlikely that you will see armed soldiers carrying rifles patrolling in public in the U.S. as you may have seen in France. The only times I've ever seen that in person in the U.S. were when the President was about to step off of Air Force One within sight of where I was sitting and briefly in airports after 9/11 (and ceremonially at Arlington National Cemetery, if you count that.) You will not see armed soldiers in airports nowadays, though, except in very rare situations (such as the President landing there.) Soldiers patrolling airports in the U.S. only happened for maybe a few months to a year or so after the September 11 attacks.

Every single police offer in the US carries a visible firearm as a part of their uniform. Therefore it is extremely likely that you will see multiple handguns during your visit as most urban areas are regularly patrolled by policemen. 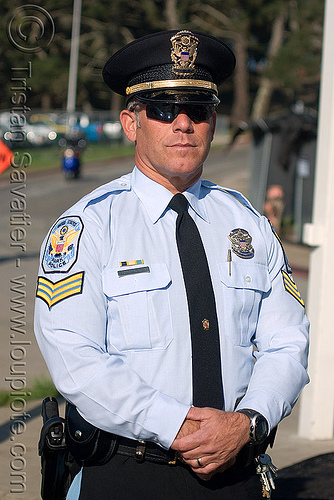 It is extremely unlikely that you will ever run across a normal citizen walking around with a gun strapped to their belt, even in open-carry states.

You will see police officers with guns strapped to their belts, that's about all you're likely to see.

There's a lot of over-hyped media attention to open-carry laws, and during some protests, pro-gun owners will make a point of exercising their constitutional right to carry firearms by bringing their guns out in public in a non-threatening manner. However this is extremely rare, and can be easily avoided by just avoiding conservative/right-wing political demonstrations. (Not that you'd be in any danger, whatsoever).

To add a case not mentioned yet: in many rural parts of the US, hunting is legal and popular. I'd include rural areas of Arizona, New Mexico and Nevada in that list (California less so). If you travel in those areas, and especially if you spend time outdoors in certain public lands such as national forests, you are likely to see gun racks on trucks, meet hunters carrying rifles and shotguns, and hear gunshots. Handguns are still less likely, though.

You mentioned Arizona. I don't live there anymore, but I grew up in Arizona and lived there for over 25 years. I hardly ever saw people openly carrying guns. Every now and then I'd see someone with a gun on their belt, it was not common- maybe a couple of times a year. You could probably visit Arizona for a month and not see anybody carrying a gun, other than police officers, of course. On the other hand, in some cases, gun owners in Arizona can get a permit to carry concealed weapons. So you really never know who has a gun with them and who doesn't.

After the terrorist attacks on September 11, 2001, I did see armed soldiers for a while in places like airports in Texas, Colorado, Tennessee, etc. However, I think that has pretty much been phased out for the most part. I haven't seen any soldiers like that in years.

It is generally recognized that concealed carry is advantageous to open carry in public. Most gun owners who carry, do so concealed. In all honesty, you will most likely be around guns, but will not see them. Most of the time, people that tend to carry openly (in urban areas), do so when they do not have a concealed carry permit.