Berlin to Göttingen by train - which Berlin station to use?

I am trying to find the station from which I should take a train from Berlin to Göttingen. A similar question does not answer my question.

Now from Bahn Website, I found that from Tegel airport there are lots of trains but there are less from Berlin central station.

There is no train, S-Bahn or Metro station at Tegel airport. The most convenient option is to take a bus to Berlin Hauptbahnhof (central station) and to catch there the train to Göttingen.

Trains to and from Göttingen also call at Berlin-Spandau, which is a bit closer to Tegel airport than the "Hauptbahnhof". This option may be faster but you have to change twice, as there is no direct link between the Spandau station and Tegel airport. These connections also show up in the journey planner of the Deutsche Bahn

The trains from Berlin to Göttingen are ICE (fast train) running from Berlin Hauptbahnhof (i.e. Berlin main station) and going through Berlin Spandau. You can find an example of the itinerary here.

Starting your trip from Tegel airport, you will need to first take a bus (TXL) to Berlin Hauptbahnhof (thanks @Gagravarr for the comment) and there does not seem to be more options from there, according to bahn.de.

An ICE in Berlin Hauptbahnhof: 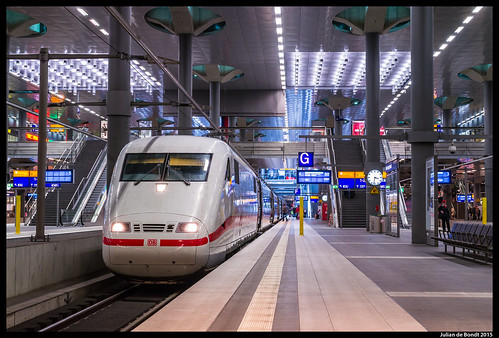 As has already been pointed out, there is no train station anywhere near Tegel airport and you must use a bus or taxi to get to any S, U or regional/long distance train.

However, you can still search on bahn.de from Tegel airport. What it will give you is an itinerary from Tegel including the bus you have to take to {reasonable station} and then the train from there. It will also typically note that the price it displays is a partial price only covering the segment using suburban, regional or long-distance trains (note: typically not underground lines). However, as the entire city of Berlin and significant parts of the surrounding area are covered by a Verkehrsverbund (traffic association), a ticket you buy on the bus for travel to a certain place within that Verkehrsverbund will be valid for each mode of transport. I’ll get back to that later.

How to plan your journey with bahn.de

Let’s assume you have a DB station (that is: regional, long-distance or suburban trains) station within walking distance and want to get to any other DB station in Germany. The principle is simple: plug those two stations and bahn.de will give you the exact connection including all transfers and an exact price. This works with suburban trains (S-Bahn) because they are historically part of DB and its predecessors. One example would be the station Ostkreuz: if you happen to be near there and need to get to Göttingen just plug it and you will get an exact connection with an exact price—even if you have at least one transfer between Ostkreuz and Göttingen.

It gets slightly more complex when the closest station is an underground (or tram) station or a bus stop. In this case, just plugging your starting point still works, but you need to be aware that bahn.de will only show the DB part of the price. (DB part includes private railways servicing regional trains; explaining why would exceed the margin of this answer.) You will need to locate the most sensible transfer point up to which to buy your bus/underground/S-train ticket and from where the DB ticket will cover.

What you saw planning your journey from Tegel versus Central Station

As Tegel airport does not have any S or U station (let alone a DB one), there is at least one bus involved. To get from anywhere within Berlin to Göttingen, you will, however, most likely use an ICE from before you’re leaving Berlin’s city boundaries. Bahn.de determines multiple ways for you to reach that ICE but in the end it will be the same ICE and you can verify that by confirming the arrival times in Göttingen of a number of connections being the same. If you check from the Central Station (Hauptbahnhof)—well, all ICEs call there and so you are given what seems like much less options. Each of the Central Station options, however, corresponds to a physically different train getting you to Göttingen and a number of the Tegel options will converge onto the same train.

How to find out what you need to pay

I already mentioned that if your itinerary is composed entirely of S, RB/RE, IC and ICE, just pay bahn.de by one of the methods mentioned and you have your ticket from start to finish.

When you have a bus, U or tram segment, you can start to calculate. While Berlin is divided into two concentric fare zones, single tickets can only be bought for both of them (Zone AB), so often a single AB ticket is the only way to get to any DB serviced station and you can use the route that is most convenient. If, however, you manage to be within range of a short distance ticket to any S-train station, it is often better to take a short distance ticket and buy your DB ticket from the initial S-train station.

Why is that? For long-distance tickets (defined as further than a certain kilometre theshold; usually 50 or 100), DB considers certain stations equivalent. For Berlin, this is basically the entire city off the top of my head. So a ticket from Berlin-Zehlendorf, Berlin Central Station or Berlin-Karlshorst to Göttingen will all be identical. This is made clear by the ticket reading BERLIN as the origin rather than e.g. Berlin Hbf. However, this is only true for S/RE/RB stations as only those belong to DB.

DB also recently started offering the City Ticket under certain circumstances. If you are eligible for one, bahn.de will ask you during the booking process. If you get it, it will be valid for your entire local transport trip to the starting station. It is definitely more comfortable but I cannot vouch that it is always the most price-effective solution (it may even be more expensive than the single ticket AB).

Plug whichever station is closest to you but remember to consider the entire itinerary. If it contains buses, trams or underground trains, these will not be covered by the DB ticket.

Not the answer you're looking for? Browse other questions tagged germany tips-and-tricks berlin or ask your own question.

5
Berlin to Göttingen by Train or Bus

11
Getting from Berlin Tegel Airport to downtown
5
Berlin to Göttingen by Train or Bus
5
Stay in Berlin for one night near Tegel airport
8
How early before departure can I reserve train tickets in Germany?
4
Transfer from Tegel Berlin to city center
2
Single-ticket trip in Brandenburg, Germany
15
How can I tell a Deutsche Bahn train has a supplementary charge?
2
How can I get from Tegel Airport to Bernau (bei Berlin) on Sunday evening?
97
In Germany, what are you supposed to do if your train station doesn't have any working ticket machines?
6
Changing at Berlin Zoologischer Garten station