While I always like to try new foods, my parents don't like to eat anything but Indian food.

So my question is: How easily is Indian food accessible in these areas?

And: Are those places (if any) cheap? Because in my country (India) a normal lunch per person in a reasonably good restaurant costs around Rs. 200, which is about 3 euros roughly.

schengen europe food-and-drink
Share
Improve this question
edited May 6, 2015 at 6:10

Specific to Paris (and vegetarian food) : There are many Indian restaurants next to Gare du Nord, on Rue du Faubourg Saint-Denis, which has a significant Tamil presence. Passage Brady has many Indian restaurants too. Quality can vary, but I specifically recommend two restaurants, Sangeetha and Saravana Bhavan, both Chennai-based south Indian vegetarian restaurant chains. For the best value for money, try the mini tiffin at Sangeetha - a (smaller than usual) masala dosa, idly, sambar, chutneys, pongal, rava kesari, and filter coffee at only €7 (yes, that is a good price!). There are other cheaper restaurants in the vicinity, but they aren't that good. 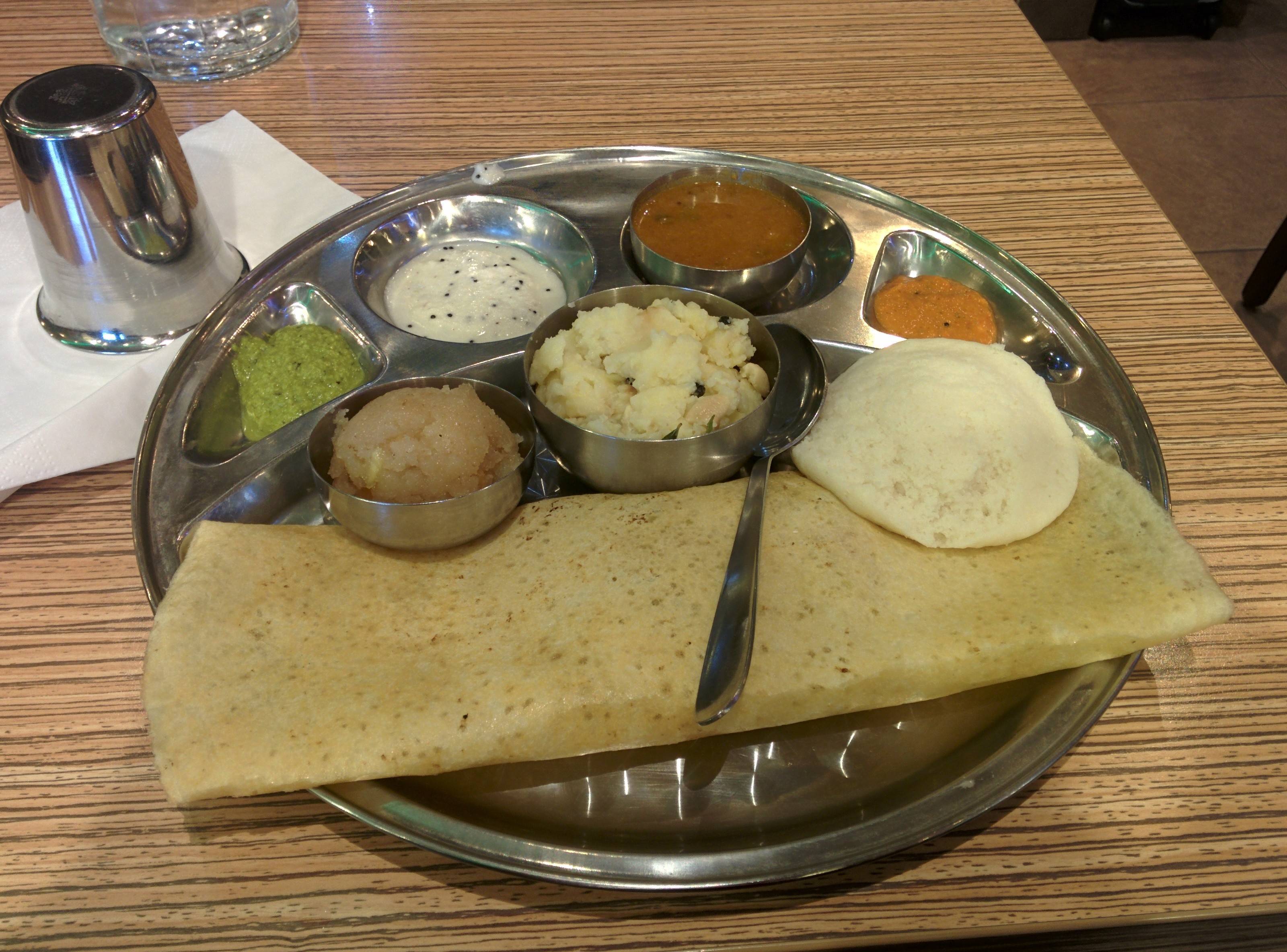 Even cheaper, there is a place called Apna Punjab, which serves vegetarian Punjabi food. It's just next to the northern terminus of Metro 7, rather far from central Paris. The decor and furniture is basic, and the restaurant looks like it could very well be in a small town in north India. A full meal consisting of 3 rotis or 2 nans, with a sabji and dal (and perhaps rice? I'm not sure), is only €5, while chhole bhature is €3.50. If you're in Paris for only a few days, it's probably not worth spending the time to go here.

There are several north Indian restaurants in Paris, at Passage Brady and other places, I don't have much to say about them.

Even if one doesn't want to experiment much with food, it's worthwhile to try some other foods which are very close to Indian in taste. For example, Lebanese food can be quite similar to Indian food: try the falafel (a kind of vada), at Maoz Vegetarian (sandwich with 5 balls of falafel, and salad from a buffet at €4.90), or the rolls ("manakiche") at Chez Le Libanais, particularly the "batata" (potato) which could pass off as Indian (€4.20).

Then you have Mexican/Tex-Mex burritos - a large chapati, rolled up, and inside it rice, rajma, possibly meat (not necessarily), some vegetables, salad, cheese, cream, and sauce (can be spicy!). Typically this is made in front of you, and you can ask them to add or not add specific items. I'd recommend BocaMexa and Chido on Rue Mouffetard (€6.50 - 7), or Chipotle (better than the previous two, and at €9.30).

You could also try Subway - a sandwich with your chosen subset of tomato, onion, peppers, olives, cucumber, cheese, lettuce, sauces, etc, and various kinds of meat (30cm vegetarian is €6).

If I had to pick just one place, I'd pick Sangeetha.

All these places are open all days of the week, at lunch as well as dinner times. The prices are as of April/May 2015.

Avoid buying beverages or any packaged food such as chips at restaurants, they are expensive - buy them cheaper at a supermarket instead.

Quality: don't expect it will (always) be the actual same food as in India itself. It will probably be made with more products the European people are more familiar with.

Price: the price will be a lot more than in India, because it's just not India. Everything is more expensive. Especially in big cities. For example: a soda in a bar in the center of Paris will already be more than 5 euros.

Alternative: I don't know if you are staying in a hotel are renting an apartment or such, because then you could go to small local Indian supermarkets and prepare the food yourself.

When I left the UK to live in germany I missed Indian food more than anything.

These days it's easy: Google is your friend. There are Indian restaurants everywhere. If you check out Trip Advisor you will even get reviews, though they are sometimes suspect.

I've definitely eaten Indian food in Paris (was a few years back so don't remember exact location). Can't speak for the other places.

But I'm sure it won't be like it is at home - they'll have adapted things to fit local tastes - it's sound business.

If they only like spicy things they could try Moroccan or Turkish. But as they saying goes, when in Rome...

The UK wasn't one of the destinations you mentioned, but I suspect the situation is similar. Firstly, most UK restaurants describing themselves as Indian are in fact Bangladeshi or Pakistani run. Secondly, the food you get served there is nothing like the food you get in India (or, as I've been told, Pakistan or Bangladesh). The main differences (to my palette and various friends who live or have lived in India) are: there's no subtlety in the spice, everything tastes like the same mix of spices with the amount of heat varied, many of the dishes are too rich, and far fewer of the dishes are vegetarian. And few of them are authentic; "Indian" restaurants in the UK aren't bad as such - just they don't serve the food you'd find in India (having been a few times). Advice from Indian friends is that in the UK if you want Indian food, you are best looking for something from a named region of India, and preferably vegetarian. For instance, Govinda's Krishna restaurant in Soho is (allegedly) reasonably authentic, as you might expect from somewhere attached to a temple; perhaps look for somewhere similar in the cities you mention?

I've eaten in "Indian" restaurants in the US and elsewhere in Europe, though not the specific cities you mention. Based on this, I would suspect if anything that the destinations you are planning to visit would be worse than the UK, as the UK has a far larger minority from the Indian subcontinent. You'd be best to carefully investigating restaurants catering to that group. In that respect, I would suggest your parents are going to be disappointed.

However, if I went to India and asked for a fillet steak, I would also be disappointed. France is the culinary capital of Europe. Having persuaded a Sri Lankan who thought all European food too bland without extra chilli added of the merits of French food by taking them to a good French restaurant, I'd humbly suggest that you might be better persuading them to try the local food. One strategy might be to take them to the first "Indian" restaurant you find, which I suspect may instantly encourage them to broaden their horizons!

If it's anything like Australia: ask a taxi driver!

We have many Indian taxi drivers here and they always know the best, cheapest Indian restaurants. I'm from the UK and I know the situation is the same there, but I'm not so sure about mainland Europe, sorry.

I've travelled a lot, and it is definitely always possible to find Indian food. You want to avoid the fancy restaurants and work out where the local Indians go. How do you get in touch with local Indians in the cities you're travelling to?...

If you want Spaghetti Bolognese, go to Bologna!

Rudeness aside, it's good point: why travel half the globe to sit and eat the same thing as you have at home? In Italy especially every little town and region have their own speciality. Instead of chasing something that you might not find, you could choose to go with the flow. And as you know: "when in Rome..." Happy Holiday!

Not the answer you're looking for? Browse other questions tagged schengen europe food-and-drink or ask your own question.

23
Where can I eat dishes that feature in western countries' Chinese restaurants?

0
Can I travel to other European Countries on my Visa?
4
Can food or cosmetics get overheated on intra-European flights?
4
Is there an Indian food market in Montevideo?
30
How do you gauge the safety of Indian street food?