This summer hundreds (maybe thousands) of tourists and literary pilgrims will make the trek from Haworth to the ruins of Top Withens. For the most part they will start at the Bronte Parsonage and follow the path across the falls, climb the ravine, and join with the Enfield Side Road to reach the ruin. 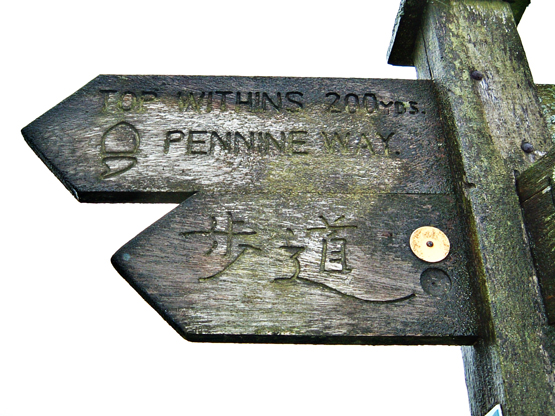 I wanted to attempt an alternate route that begins at a place I hope this question will identify. The illustration for the 1872 edition of Wuthering Heights is an engraving... 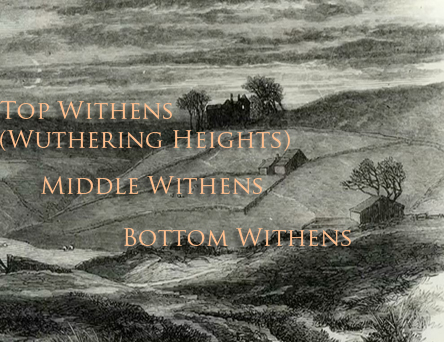 I have used Photoshop to put labels on the three farmhouses. It is known that the artist's depiction of the house called Top Withens is fanciful, and that's not the point. Its location is real and the three farmhouses are known to have existed. Where did the artist (known to be Edward Morison Wimperis) stand? The path commonly used by literary pilgrims does not provide this vantage point.

The foreground of the illustration appears to show an old drove which crosses a country lane. The three farmhouses are shown in a straight line which runs parallel to a dip (possibly a ravine) on the left. But there's no orientation. The view could be from the from the east, or looking north or even looking west. The shadows are wrong for a southern aspect. The ruins of Bottom Withens and Middle Withens are gone by now, at least I cannot find them on Google Maps' satellite view and there is no indication on this marvellous overview provided by Google.

I expect that it is within a two mile radius of Top Withens, but would not have the time or stamina to explore the entire area. I accept that roads and structures may have been built in the intervening 140 years, but still the artist's vantage point should be locatable within a reasonably precise radius.

Take a look at this photo and this Google map. I believe that the photo was taken from around about the site of Bottom Withens (which I think is at 53.818568, -2.025406 on the map - North East along the Pennine Way from Top Withens - a distance of some 520 metres) as we look. I think that the 520 metre distance makes sense - very much farther apart and, even though they are in a line, they'd hardly be related. Also, assuming perspective is accurate in the engraving, the buildings don't look to be a huge distance apart. In the photo, however, there appears to be some foreshortening, consistent with a zoom lense.

Not the answer you're looking for? Browse other questions tagged uk hiking pilgrimages literature yorkshire or ask your own question.

6
Is hiking up Ben Nevis doable with a fear of heights?
5
Is the St-Jacques de Compostelle pilgrimage realistic for a non-experienced hiker?
44
Do's and Dont's of doing a pilgrimage as an atheist?
39
Walking 14 km on a pilgrimage road where footwear may be considered disrespectful
18
Are there any formal religious pilgrimage journeys to take in the USA or Canada?
5
What are the necessary contents of an “Islamic certificate” required for a convert to perform Hajj pilgrimage?