Can I travel by car or van with unusual objects like furniture?

I am visiting several countries in Europe by car. Namely France, Belgium, Netherlands, Germany and maybe a few others if possible.

A friend currently living in Paris and moving near Amsterdam offered to pay for a van (I will rent a car) and part of the gas if I transport some of his furniture, books, etc (he can't do it himself, but that's outside the scope).

I am all right with it but I am worried because I don't know If I can legally do this. I am not worried of transporting anything illegal. I know him well enough. I am worried because I know one needs documentation for the police when you move things from one place to another (eg: an invoice if you bought the merchandise will do or a waybill if just transporting from A to B). Basically to prove you legally possess those things and show where is the origin of the objects.

Can I travel by car or van with unusual objects, like furniture, and an unusual amount of objects?

Unusual in this context means unusual for someone traveling and visiting countries. I don't usually transport a bookshelf and 200 books when I travel.

legal road-trips
Share
Improve this question
edited May 1 '15 at 15:02

As per the official EU Travel Guide:

There are no limits on what private persons can buy and take with them when they travel between EU countries, as long as the products purchased are for personal use and not for resale, with exception of new means of transport.

You do not have to prove the origin of the goods or show any sort of invoices, unless traveling outside the EU. Note that several European countries (Switzerland, Norway, Iceland) are not part of the EU despite being part of the Schengen area.

The only exceptions, for which there are limits are:

Another thing to consider is whether your car can accomodate the luggage without anything sticking out the windows or the car itself exceeding the tolerable weight limit.

Yes you can travel with furniture and other household goods in a van. That's what vans are made for. :)

Three things you should consider:

No need to declare anything when crossing borders between countries that are part of a customs union. In Europe for example you have Switzerland that is inside Schengen but not inside the EU customs union. Hence you'll have to go through customs checks to drive through it with a loaded van. These include providing a detail of the contents of the van, demonstrating that the goods are not for sale and have no commercial value, and paying whatever custom duties are involved upon entry, to be reimbursed when exiting the country. See the image below (courtesy of Wikipedia) for the map of the countries inside the EU customs union: 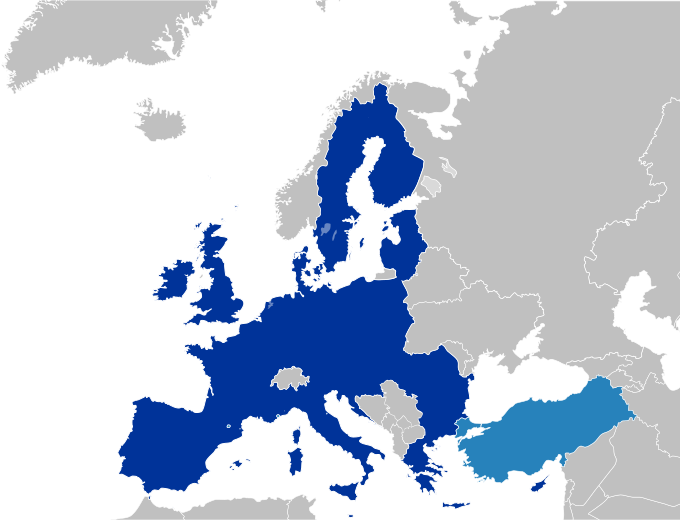 You must respect the maximum gross weight limit for the vehicle you use, as well as the allowed extra dimension for goods longer than your vehicle if applicable. This is an issue both for road safety: routine police checks can take you to places where you weigh the van and its contents to check for this, as well as for customs since any country with customs check will weigh a loaded van. Again this is the case for Switzerland to name one.

Ensure you have proof of ownership of some sort. A letter signed by your friend translated in several languages, along with a photocopy of their valid ID will do. This is just an extra safety measure you take to avoid being accused of robbing someone's house. Of course you could always say the stuff is yours, and it might probably be hard for police officers to demonstrate otherwise. Moreover so long as nobody reports a van full of stolen goods nobody would have a reason to suspect you. Nevertheless the main objective should be to get from A to B as efficiently as possible. Being held up by zealous police officers in a foreign country is something that will most definitely spoil your journey, let alone cause you delays.

All in all the European Union customs union have made these matters a lot simpler than they used to be a while back. As long as you stick to such countries there a big chance you'll never encounter a single content check on your way to wherever it is you are going. This is of course assuming that you are a cautions law-abiding driver.

As far as I know you can transport household goods with no value limit within the EU as long as you can prove you own them or that you paid tax on them in the EU country you bought them or paid duty on the border you brought them into the EU.

As your friend owns the goods and not you, you should technically hold papers to prove that fact and that you transport them for him, but I am not sure there are standard forms for that.

I however will NEVER bring any package nor anything bigger across any border for someone else. You may trust your friend, can you also trust his friends who know you will be the one bringing the stuff across the border. (It is easy to hide something small, call the border officials when you are near the border and when they check out the van and all in it, they pass with loads in their car.)

Not the answer you're looking for? Browse other questions tagged legal road-trips or ask your own question.

15
How far away can I get with my car starting in Amsterdam?
12
What kind of a car do I need to travel along the Panamerica?
2
Can I drive a van in Australia on my UK full driving licence?
17
Road-trip in USA: can a foreigner buy a car?
8
The importance of staying central in a visit to Amsterdam with car
11
Pet Travel: UK to Romania by Car
10
Exploring Switzerland with a car - where can I park?
3
Long distance (16 hours) car trip with rental car and driver
1
Can I buy and tow an RV trailer pop-up with USA license plates with a car with Mexican license plates in the USA?