What is the best way to get Mexican Pesos from Canadian Dollars?

My girlfriend and I expect to need about CAD$200 each for our upcoming vacation in beautiful Mexico. Using our CAD$400 total, what method of exchange will give us the most Mexican Pesos ($MXN)?

But I would like specific dollar values for CAD to MXN because I assume it varies country to country and that are some fixed costs that depend on how much cash you are changing.

HSBC, then Credit Cards, then Banks

There's over 10% difference between the best (HSBC) and the worst (Travelex), so doing your homework can earn you several more cervezas! This was a relatively small sample size, so if you want to be absolutely sure, call your own banks and credit cards. 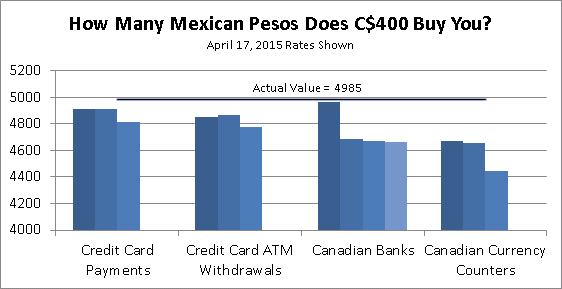 Each of the following includes a 2.5% exchange fee

Amounts listed are for in-person currency purchases in Canadian bank branches for customers of the bank. There may be extra charges if you are not a customer of these banks or if you withdraw MXN using an ATM in Mexico.

Note: In my answer, I use specific dollar amounts. These amounts were accurate as of April 16-17, 2015, but obviously exchange rates fluctuate. More important than the specific dollar amounts is the differences between these methods, so even if the numbers are obsolete the answer to the question (the best way to convert these currencies) won't change.

I live in Mexico and have traveled throughout the country.

Most touristic places will accept VISA/MasterCard; American Express is not widely accepted. I suggest getting the cash you need at any ATM, there are plenty of them in urban areas. The main banks you'll find ATMs are from:

Go to their websites to check for the exchange rate. Ask your bank how much will charge you for using an international ATM.

All ATMs will ask for your 4 digit PIN number. When looking for one ask for a "Cajero Automático", no one really knows them as ATM unless they speak good English.

Hope this helps and hope you spend a great vacation in Mexico.

This is a answer telling you what not to do, and I could have made it a comment, but the information is too important to risk it having disappear (as comments can do).

If you use ATMs in Mexico, avoid the isolated machines standing in hotel lobbies etc. Too many of these are compromised and your financial information will end in up in the hands of hackers. Use only bank ATMs, i.e. the machines built into their walls.

Brian Krebs has written extensively about this on his blog.

Finally, many readers have asked if any of the skimmed ATMs I found in Mexico were bank-owned and operated ATMs, or machines on the premises of bank properties. None of them were: All were free-standing cash machines owned and operated by private companies.

As several people commented on his blog posts, you may also want to avoid paying with credit cards in restaurants: just pay with cash that you got from the bank's ATM.

7
Best way to obtain Canadian Dollars traveling from the US