Hitchhike from Montreal to San Francisco

I'm planning on hitchhiking from Montreal to San Francisco in a week or so. I want to get to SF as fast as possible.

Do you think it's feasible in +/- 10 days, maximum two weeks?
Does anyone have any experience of this trip?

I've actually hitchhiked tens of thousands of miles across North America, and while I haven't done any in the past few years (so things may have changed a little) I think it's certainly possible to do this in under two weeks. I've gone from Massachusetts to California in six days, for instance.

What I don't have is any experience hitchhiking as a woman, so I can't give much advice there. I will strongly recommend you keep your passport, phone and money/cards on you at all times, though, never in a purse or backpack.

I mapped this out on Google Maps and I'm fairly happy with the road route it gave as a hitchhiking route. The things I want to note in particular are:

Some location-specific advice based on my own travels:

This is the "Relative Ease of Hitchhiking Each State of America" from Hitchwiki. I will presume you are not an experienced hitchiker so you'd want to avoid the red areas. Now Montreal is not on this map but it seems you will have problems in Ohio-Indiana-Illionis or if you get further south the Kansas-Oklahoma. This http://expertvagabond.com/hitchhiking-america/ fellow did a coast-to-coast hike -- but it took him five weeks. 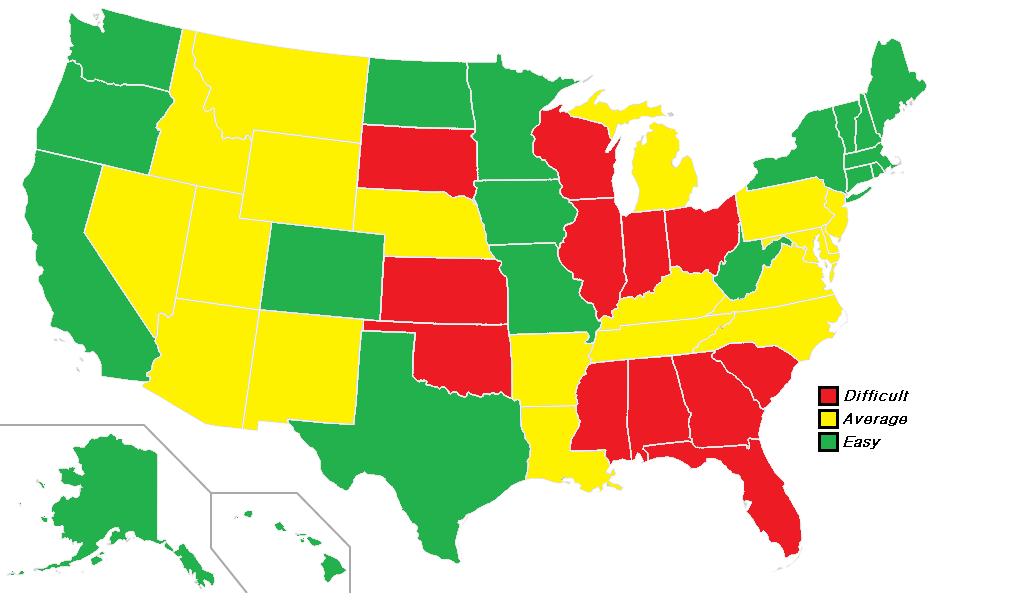 Not the answer you're looking for? Browse other questions tagged san-francisco hitchhiking montreal or ask your own question.

49
Computer geek tourist attractions in the San Francisco Bay Area & Silicon Valley?
1
San Francisco to Singapore with a two-day stop in London
17
Is it possible to hitchhike to Galapagos?
4
Is feasible to visit Old Montreal or Downtown during a 12-hour layover?
7
Public transport connections to San Francisco after Caltrain stops running
2
In Montreal for two weeks- possible/recommended to get Bixi membership?
3
Is there somewhere I can store luggage (one or two normal suitcases) in San Francisco for a few days?
13
Baggage locker in downtown San Francisco
2
Getting around San Francisco on a 3-day trip
1
Multiday parking in San Francisco