While I was buying a train ticket in the Netherlands train site (https://www.nsinternational.nl/en) from Den Haag to Brussels, I found a warning stating: (Screenshot below)

Does this mean that this train will not run this day? Will this impact me in any way? 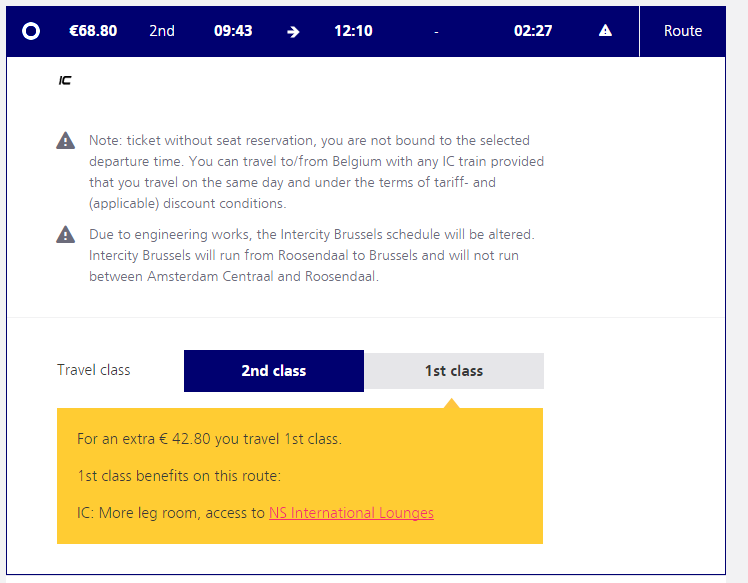 Indeed, it means that on that day, the train will not run as usual. However, only a portion will be different.

The ICBrussels train runs between Amsterdam and Brussels, through Den Haag and Roosendaal. According to the message you saw, your train will run only between Roosendaal and Brussels. You will have to find another way to go from Den Haag to Roosendaal.

While the interruption is not shown on the works interruptions page, you can see what is expected from travellers. It suggests once to rely on the national trains. However on the national trains website, it also mentions the works and recommends to take the bus, but it says the advice is not yet final (I used Google translation, so someone could be more precise on that part). And it recommends to plan at least 10 days ahead.

So you have 2 options: take the Thalys, more expensive but a priori not using the same tracks on that itinerary, or coming back later on the train website (the price does not seem to change) and plan ahead. It does not say precisely how the bus will work (and if it is a specific shuttle or an existing line), but I suppose you can expect to take a train from Den Haag and Dordrecht, then a bus from Dordrecht to Roosendaal, and finally the ICBrussels from Roosendaal to Brussels. Expect some delays, so take your time, if you go that way. But in any case, you should be able to reach your destination.

Not the answer you're looking for? Browse other questions tagged trains netherlands belgium or ask your own question.

8
Am I allowed to transport a bycicle on the train in The Netherlands and Belgium?
9
Is there catering on Dutch domestic trains?
5
Is it possible to buy train tickets on board Belgium trains?
10
Amsterdam To Rotterdam by train
5
Amsterdam: day tickets from Sloterdijk to Centraal?
13
How can a private person put a SNCF train ticket on hold to combine it with its return journey later?
5
How early before departure can I reserve train tickets in Belgium?
7
What train ticket do I need to buy to take a bicycle with me on the train to Belgium?
2
Can I bring a suitcase on the Intercity train from Amsterdam to Groningen?