Is it legal to bring Hentai/Yaoi from Japan to Europe (EEA)?

Last year my friends and I visited Japan and naturally we wanted to bring some souvenirs for our friends and family. We were looking for some yaoi/hentai manga books for one of our friends, who is particularly interested in Japan. We didn't buy anything in the end, but someone said that we wouldn't have been able to carry it with us to Europe, as it's pornography. Is certain Japanese manga treated as pornography and is it legal to take it with you on a plane?

And if you have a stopover in say Dubai you have to be doubly careful as anything they consider pornographic can get you arrested and in prison even if you're just there to switch planes, would never leave the airport.

Yaoi Manga is a genre of illustrated books that contain homo-erotic content, or in some other way appeal to the prurient interest of its fans. It's soft-porn and does not feature children. Other Manga genres devoted to children are outside the scope of this answer.

These books are available over-the-counter in Europe. As evidence, here's an Amazon (France) snapshot... 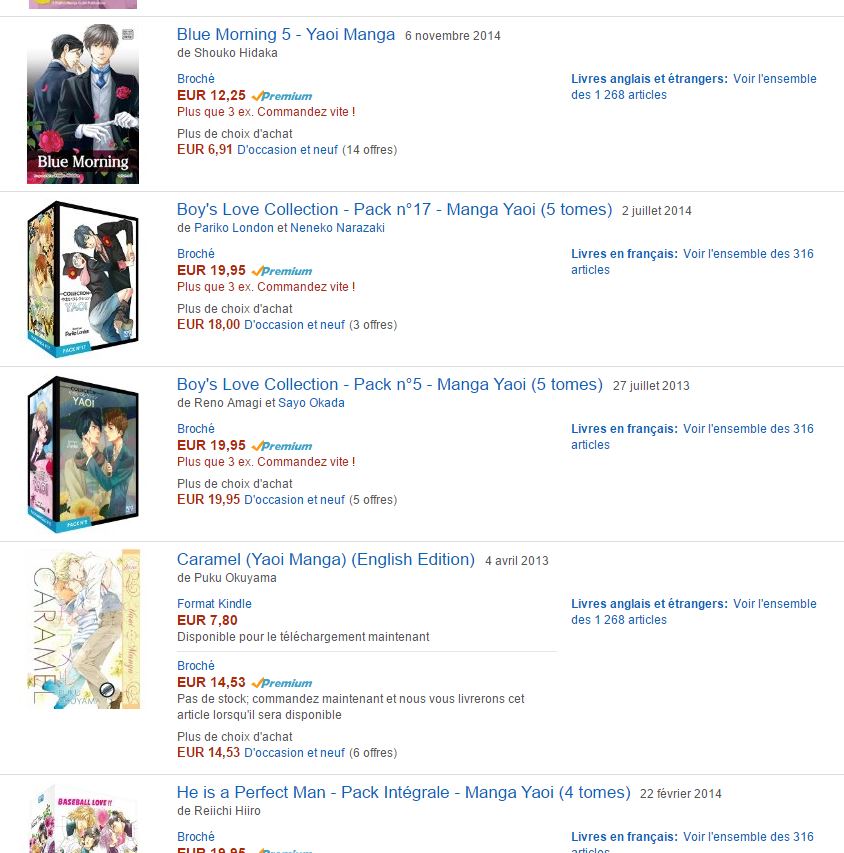 Note: Next day delivery may not be available. Items purchased in Japan may or may not be duty-free. Also note: Images depicting children under 18 in sexually charged scenarios, even cartoons, are unlawful throughout the EEA.

Not the answer you're looking for? Browse other questions tagged customs-and-immigration legal japan shopping or ask your own question.

5
Bring wine from Europe to Asia
3
Importing shells from a US beach into Japan
6
Are British immigration officers permitted to require evidence of a relationship between passengers and their children?
11
Is it legal to bring a drone to Japan?
2
Is it allowed to bring food items to Japan?
3
Can I bring a 1-litre bottle of alcohol as a duty-free item to Japan?
3
Can I bring flowers on plane from the EU to Japan?
5
Is it legal to bring back seashells from Ireland