Is a picnic at the Chateau de Versailles possible?

I will be visiting the Versailles Chateau on a Tuesday. I was wondering if it would be useful to take a picnic with me since I doubt the fare offered inside the palace walls (if there is any) is not for vegetarians. Plus, I would like to picnic there. What frightens me is the mention of long queues at the baggage check (where presumably, I would need to deposit my picnic as I visit the interiors).

Alternatively, Google maps shows a couple of Boulangeries around the palace. Can I exit the palace and then re-enter after purchasing my food? I have a "passport ticket" to the palace allowing me to view the fountain show as well.

What the best option to ensure that I sustain myself on a day long trip (~8 hours possibly) to Versailles?

You have several possibilities for a picnic on a normal day (as Gayot Fow's answer mentions, the white picnic is worth the trip as well).

The first one is where everyone goes, particularly tourists - namely around the Grand Canal. I would not say that you need to "reserve" your spot but some places get crowded. 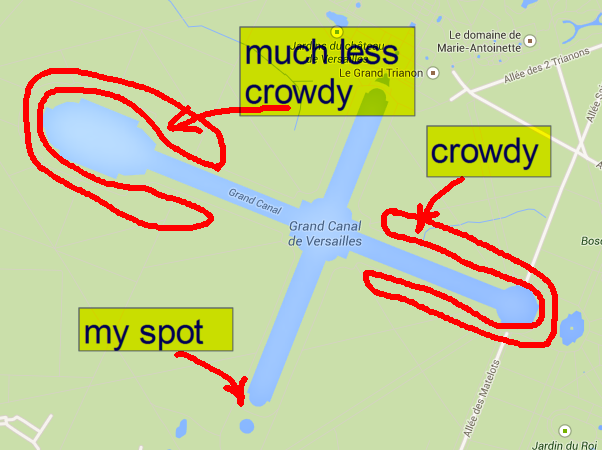 A picture I took in May, on a Sunday, from the left bank of the canal, where the Allée des Matelots meets the Grand Canal (showing the "crowded areas" above):

There is another place, where locals tend to picnic (more than tourists); This is also a typical place for children birthdays, starting from May 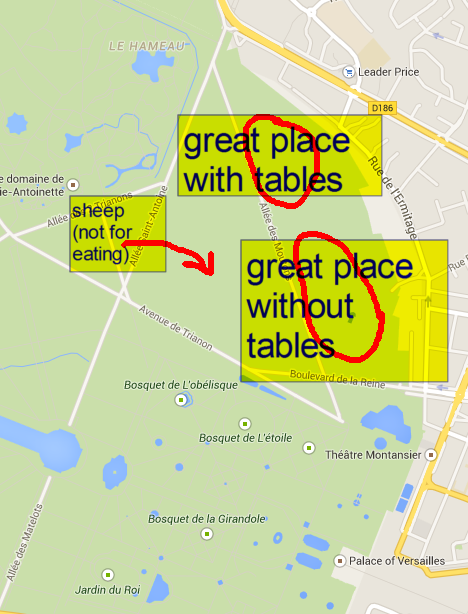 I would not recommend any of the boulangeries - they are great for bread but will be horribly overpriced for a picnic. Better bring in stuff yourself, there are supermarkets nearby (the closest will probably be Leader Price or Super U which is not that far either). There are others too but I know that side of the gardens better :)

You can now drive into the Versailles Gardens ($$), which can be practical if you need to carry a picnic for 27 people.

You have a few places where you need to pay in the Versailles castle:

You probably can bundle some of these, I do not know because when I was actually visiting Versailles all of this was free and now I walk or ride on the free part :)

A rough map of the pay vs free areas (I missed the Trianon in the pay area). The line in blue are the roads where you can drive. 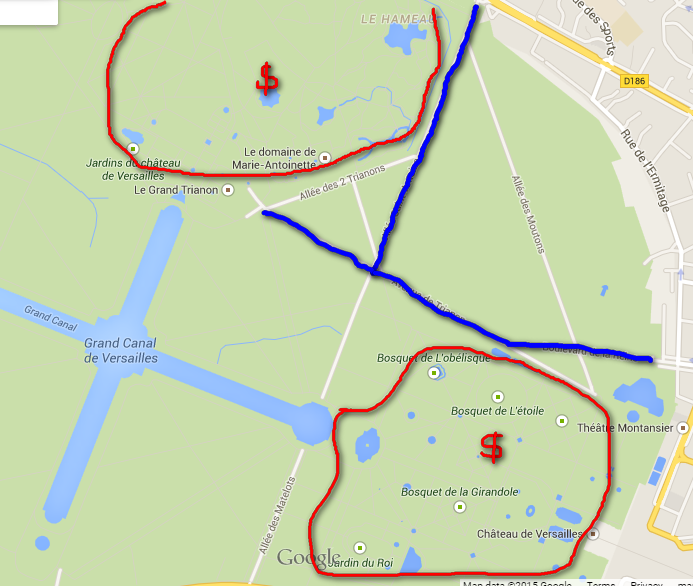 If you had to make a hard choice I would go for the Hameau de la Reine which is unusual. Still, the castle is nice, the gardens are nice too. It really depends on the time you have.

You can also rent bikes at the entrances of the garden.

There are light and sound concerts in the evenings during spring, summmer and automn - I finally attended to one of the fireworks. It is definitely worth it - you walk in places that are usually closed for two hours or so, there are some water shows and when night falls down - fireworks. I would say that the fireworks part is the lest interesting one (standard fireworks) but the overall atmosphere is great.

All in all Versailles is a fantastic city.

Of course you can picnic at Versailles, it's de rigueur; in the gardens behind the palace that is (not inside). You can picnic all year around whenever the gardens are open to the public. In the summer the only problem is finding a suitable spot because the competition from other people having a picnic can be quite keen. Pick your spot early and lay a blanket down to 'reserve' it as soon as you arrive in the morning. Europeans will generally respect the 'reservation', especially the British and German tourists.

On Bastille Day, the 14th of July, a wonderful "Déjeuner sur l'Herbe" is organized in the gardens of the Palace of Versailles. Thousands of people come together with their picnic baskets and have a festive meal on the banks of the Grand Canal. In English it is known as the Picnic of Versailles or the White Picnic ("pique-nique en blanc"), since white is the dress code.

You need about one day to see Versailles gardens, but you will only see the essentials. And we tell you that from experience. The gardens of Versailles are incredible big and beautiful, a blend between nature and culture. You can have long walks, rent a boat, admire the sculptures and flowers, have picnics with friends, listen to the musical fountains and

For your last question: the best option is to eat a very large breakfast before you enter the grounds. Don't drink too much wine at mid-day because it will slow you down and dull your senses. The boulangeries in the surrounding neighbourhood are very upmarket; try to get your stuff in one of the arrondissments beforehand.

Just to complete the answers:

Can I exit the palace and then re-enter after purchasing my food?

No, at least it was not possible when I last went there (September 2014).

The reason is most likely because it is not possible to verify that the same person who is leaving is the person coming back. Tickets are not registered to a given name (otherwise, checking all of them would take inordinate amounts of time). Therefore, you would be able to visit the château in the morning, leave it, and then re-sell/give your used ticket to another person. To avoid that, they disallow re-entering using the same ticket.

Conclusion: unless you are exempt (i.e. EU residents < 25 years old) and willing to re-queue, you cannot leave to buy food.

BTW, the food indoors is quite expensive: sandwiches were about 8€ IIRC. There's also a restaurant indoors, but I dared not check the prices.

Not the answer you're looking for? Browse other questions tagged food-and-drink paris architecture parks-and-gardens versailles or ask your own question.

7
How to avoid paying for musical gardens if visiting Versailles Palace on a Tuesday?
11
Is it possible see the interiors of the Dome of the Rock?
6
What do I need to know to go to the Palace of Versailles?
18
The website says the Eiffel Tower is sold out for two months. Is there anything I can do?
16
Are there other places with gardens like those at Versailles?
4
How to get by train from Normandy to Versailles?
5
How long does it take to get from Gare du Nord to the Palace of Versailles, by public transport?
3
Versailles palace tickets. Musical Fountain Shows or Musical Gardens days or not if you are under 26 years old
2
Versailles Garden and Palace - can we leave and re-enter on a Museum Pass
2
Is it possible to visit Park Guell in Barcelona for free?