I have booked online, via Travel Up, a Turkish Airlines Economy Class flight from Manchester, England to Tbilisi, Georgia via Turkey with a layover in Istanbul.

The e-ticket states that the baggage allowance is 40kg. This seems a bit of an excessive (but welcome!) weight allowance for economy.

I traveled last year with Turkish Air on the same route and the allowance was stated on the e-ticket as 30kg. I boarded with 28kg and had no problems.

I know all the conditions on the Turkish Airlines website says economy is 20kg, with various exceptions, but cannot understand why I have such a large allowance this time.

Does anyone know if this is correct and, if not, could I hold them to it at check-in as it clearly states 40kg on the e-ticket?

I finally have the answer.

I called up Turkish Airlines and they have confirmed that my checked allowance is 40kg, although this must be divided over two suitcases as the limit is 32kg per case.

Thank you everyone for your research and advice. It looks like I'll have to order a bigger taxi to the airport!

As you already figured, the baggage information on Turkish Airlines states a basic 20kg per passenger for international flights, with a lot of exceptions.

Looking at the baggage information page, I can see exceptions for flights from/to USA and Canada, South America, many African countries and some European countries like Germany and Ireland. There are even exceptions based on the season. There is however no exception for UK. But the most important part of the page is maybe the message at the very top:

The free cabin and checked baggage allowance may vary according to reservation class and departure runway. Please check your ticket for information regarding your free baggage right. For interline flights, the baggage policy of the airline designated Most Significant Carrier by the system will be in effect.

So what matters is not so much the (complex) content of that page, but the ticket. You should read your ticket (if you received multiple emails from your travel agent, this is usually written at the beginning of the email if it is or not a ticket) and only this condition applies.

Also, even though Turkish Airlines is most likely operating both of your flight segments, there is also the rule of the Most Significant Carrier. This means what applies is the allowance of the airline operating your longest/most significant segment:

On the baggage page of Turkish Airlines, there is also a distinction between some cases giving you 40kg of allowance or 2 pieces of 20kg. So if this is the case, you may bring one bag of 40kg. However, as @AndrewFerrier commented, most airlines usually forbid bags over 32kg, most likely to respect the back of airport workers. This is actually probably a request from airports. So, for their health, and to avoid paying overweight fees, it is probably better to bring bags weighing less than 32kg.

So in the end, you should look at your ticket to know your baggage allowance.

I have flown from UK (London) to Tbilisi with Turkish Airlines many times. I have my next flight from London to Tbilisi booked for just over a month from now. The baggage allowance normally is 20 kg and this is stated on the ticket.

What you can do is go to the Turkish Airlines website and then find your reservation there - even if you didn't buy the ticket directly from them, you can access it using your details.

If you have your e-ticket number, you can go directly to http://www4.thy.com/mybookings/etinput.tk?lang=en and input your ticket number and name and access the details. If not, you can go into My Bookings section and use your PNR and name. Then from there navigate to "View my e-ticket" - there, you'll see your baggage allowance.

The image below is a screenshot from my booking for later this year - you can see it showing 20 kg for each leg. 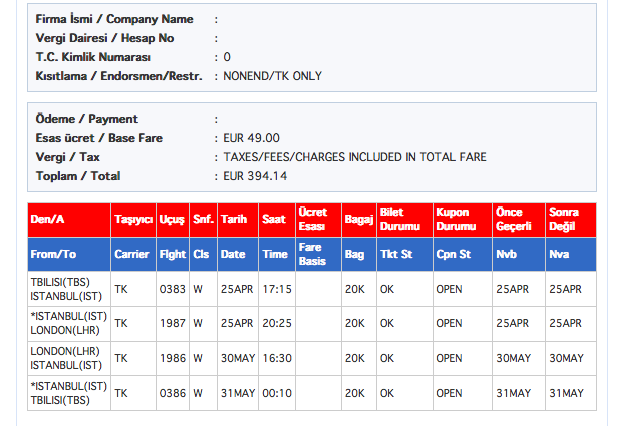 Note that if you are travelling with a child, then the allowance shown on the e-ticket will be the combined one for you and the child - as can be seen on this second screenshot for another flight of mine booked for later this year. Here the allowance shown is 40 kg - 20 kg for myself and another 20 kg for a child occupying a seat. If it were an infant without a seat, then it would show 30 kg (I had this last year). 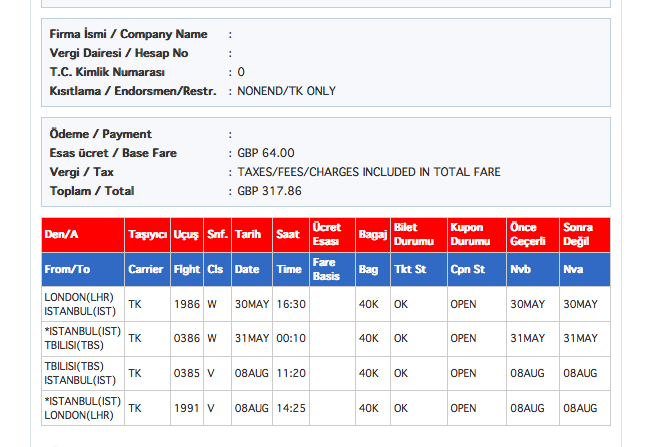 Not the answer you're looking for? Browse other questions tagged luggage turkish-airlines or ask your own question.

2
Luggage allowance on Turkish Airlines
5
Interline agreement Azerbaijan Airlines and Turkish Airlines
2
Baggage Allowance with Qatar Economy (N) class?
2
Is 1h 5m enough time to make a connection Istanbul Atatürk airport?
5
How long do I have to wait to receive a compensation from Turkish Airlines?
4
Two letters of first name are swapped, can I still fly with Turkish Airlines?
0
Excess Baggage Costs
1
Does Turkish Airlines refund round trip after going the first half?
1
Turkish Airlines Cabin Baggage COVID - are they enforcing the 4kg rule?
1
Transfer of baggage Turkish airlines to Oman Air - LGW to HYD