Is there a reliable list of airway companies that overbook flights? And, is there any shorter list of companies that do overbook, but when too many passengers show up, they deal fairly with it?

I had recently this problem with Iberia and was not amused. First the horrible surprise, then the horrible way they dealt with the case.

They are able to do this and remain profitable as the majority of their customers are tourists, instead of business fliers, and their tickets are non-refundable, thereby lowering the chances of passengers missing their flights.

Wikipedia mentions JetBlue as an example of a company which doesn't overbook flights. However their terms and conditions do mention the possibility of passengers being denied boarding, probably to accommodate for passengers who missed earlier flights, and transport of crew members to the destination airport. Quoting from the JetBlue FAQ page:

While JetBlue does not purposefully overbook flights, there is a slight chance that a seat will not be available on a flight for which a person has a confirmed reservation.

Of course, not all low-cost carriers follow this policy. For example EasyJet does overbook its flights. For a more complete review, here is a 2013 blog post on Which which analyses the policies of 14 airlines. Below is a summary (image courtesy of Which): 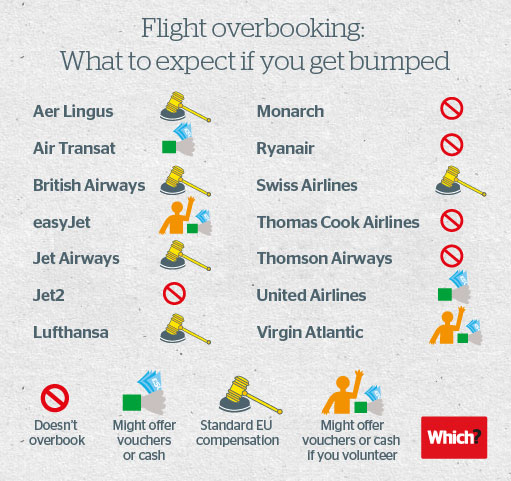 Ryanair is the only airline in Europe that does not overbook its flights; therefore Ryanair has eliminated the possibility of passengers being denied boarding due to overbooking. However if for technical or immigration reasons, it becomes necessary to accommodate passengers on another flight, Ryanair will try to prioritize the needs of and minimise the delay to those passengers effected and provide compensation in line with Regulation EU261/2004.

For example on the latter, there are regulations for passengers : flight attendant ratio and if crew calls in sick and no replacement is available then yes some passengers will be removed from the plane. The other side of the coin, if they need to move crew and there are no seats available, you can be bumped again.

With that said, I am reasonably sure other airlines would tear Ryanair apart if this would be a lie so probably this is true and they are the only ones in Europe who do not overbook.

Edit: Check out this comment: http://www.cbc.ca/1.3022473#vf-7598300001581 claiming WestJet never overbooked a flight in 20 years. WestJet spokespeople have repeatedly claimed it is their policy for eg http://www.theglobeandmail.com/report-on-business/air-canada-ordered-to-increase-payout-to-bumped-passengers/article12191581/ in here.

So far I have found four airlines that say in their policy that they don't (intentionally) overbook flights. I will add to this list (and invite other to do so) if I find more.

As @chx said, Ryanair's Passenger Charter explicitly states they do not overbook flights. Of course you can be bumped for other reasons like if you cause a disturbance etc or if a flight crew need an extra seat (this is very rare).

From personal experience: this is true. I fly Ryanair a minimum of 4 times a year and I've never had seen or heard of a passenger being kicked off a plane. They don't offer stand by tickets and free check in is only 30 hours before the flight. The only allow online check so whether you pay to choose your seat or not, you have a seat number before you arrive in the airport.

This airline does not "intentionally" overbook flights but still has policy in place for "accidental" overbooking:

While JetBlue does not intentionally overbook its flights, there is still a slight chance that a seat will not be available on a flight for which a person has a confirmed reservation. If the flight is overbooked, no one will be denied a seat until airline personnel first ask for volunteers willing to give up their reservation in exchange for a payment of the airline’s choosing. If there are not enough volunteers, JetBlue will deny boarding to other persons in accordance with its particular boarding priority.

There have been reports of many over bookings by JetBlue in spite of this policy (hence the inverted commas). One claim

I have not been able to access SouthWest's site to confirm their policy but this news article claims that:

WestJet is another airline that claims it does not overbook its flights saying:

We’re proud that we do not intentionally oversell our flights – we only sell the same number of seats that we have available on an aircraft. However, there are instances, operationally, where for example we need to switch to a smaller aircraft, or there may be a mechanical issue with a seat, that can create a situation where a flight becomes overbooked. In these cases, we’ll work with our guests, and ask for volunteers willing to take a later flight in exchange for compensation.

You can take it that all airlines overbook until proven otherwise. It's a legal and common practice. In general, I haven't seen many reports of people being forcibly removed from the plane in Europe because European Airlines supposedly "use algorithms that predict the number of no-shows per route". Check out this article if you're more interested.

Not the answer you're looking for? Browse other questions tagged air-travel compensation overbooking or ask your own question.

29
What rights do we have after being 'abandoned' in Guatemala during a technical stop?

29
What rights do we have after being 'abandoned' in Guatemala during a technical stop?
18
what is the most advanced flight search engine besides Azuon and Matrix?
9
In the EU, what rights do you have if your rental car agency fails to deliver?
82
Denied boarding although I have proper visa and documentation. To whom should I make a complaint?
9
Does Norwegian overbook flights?
4
How do I know if my flight was cancelled/delayed due to "extraordinary circumstances", as defined in EC 261/2004?
35
Why would an airline put 15 passengers at once on standby?
4
Which airport has direct flights to the most countries?