What areas to avoid in Amsterdam for a family-friendly visit

I will be traveling to Amsterdam with elderly parents. They/we have a different "comfort zone" and would like to avoid walking through some liberal areas (such as the red light district or cannabis cafes) in Amsterdam. No disrespect meant to the Dutch, I applaud their liberal attitude but we aren't ready for it yet. We would like to experience a "family friendly" Amsterdam.

Is that at all possible? I would like to mark it all out on a map. I started doing that but all I have shaded off is the red-light area as suggested by google maps.

The Google Map of the Red Light Disrict is a bit misleading. It highlights the De Wallen district but in reality the majority of the "windows" are in a smaller area inside this district hugging Oudezijds Voorburgwal along the canal and in and around the De Oude Kerk church. 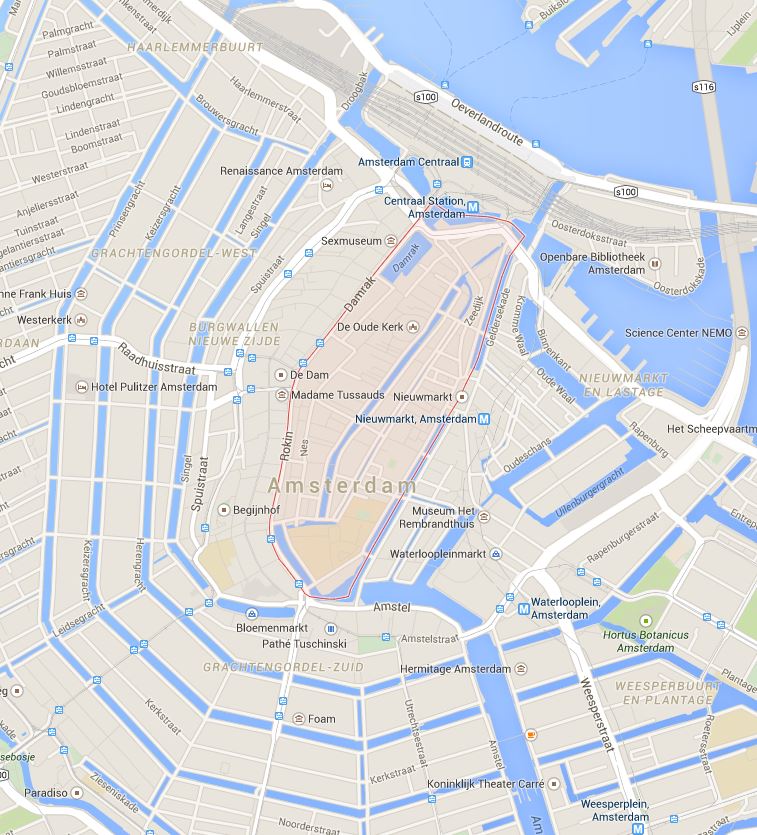 It can be hard to visit Amsterdam and not see the "sights" of legalised prostitution as there are other smaller areas where it is legal like the one in De Pijp which is along a street of apartments and bars.

However they are easily distinguishable by their neon red lights above windows and doors so they are easily avoidable if necessary. If you do happen to pass one of the windows though you will not see very much. In my experience they were generally empty or the black curtain was drawn.

Regarding the smoking of legalised cannabis these are much harder to avoid as they are present in all areas but confined to coffee shops. But as Relaxed mentioned they are very inconspicuous apart from the odd smell here or there.

There are lots of family friendly activities to do in Amsterdam. The rich architecture, history and art of the city to name a few. Enjoy your trip!

Places selling cannabis (“coffeshops“) aren't restricted to a particular part of town and can't be avoided entirely (to be accurate, their locations are in fact regulated through a permit system and they are required, e.g., not to be too close from a school, but they are not restricted to one specific neighbourhood). On the other hand, there is not much to see apart from a sign, sometimes a bit of music or a smell for the larger ones. From the outside, many look more like a closed disco or café than anything else. It might not help if you find the very idea disturbing but it's very easy to just move on, or in many cases, not notice them at all.

Avoiding the red light districts (especially the larger one called “De Wallen“) would therefore be the most important. The one in the Singel area in particular is a bit surprising. Whereas you can “feel” you are getting closer to De Wallen (many neon lights, seedy shops, drunken tourists…) and avoid it easily, I once stumbled upon the other one while getting out of a car park. There were a few “windows“ in quiet tree-lined streets in a picturesque neighbourhood, not far from some upscale restaurants and a conference venue, which was a bit disconcerting.

More generally, the Netherlands have become (in)famous for their liberal approach to many things but at the end of the day, all of it is limited in scope, inconspicuous or easy to avoid. Putting things into perspective, the ads or street prostitution I occasionally came across in Germany seemed more obnoxious.

Not the answer you're looking for? Browse other questions tagged amsterdam family or ask your own question.

14
3 days in Amsterdam: What to see?
4
What are family-friendly places to visit in Hiroshima with young kids?
5
Weather recommendations for Amsterdam
12
Is Amsterdam a dog friendly city?
8
The importance of staying central in a visit to Amsterdam with car
5
Tulip Garden to visit on End of June Amsterdam
1
Can a BIVS visa holder visit Amsterdam for 2 days?