What's up with low visibility in Thailand?

While I was in Thailand in February (Bangkok, Chiang Mai, Krabi), I noticed low visibility throughout the country. It was like smog and it never got away. When flying I noticed this "smog" was instantly gone after reaching a couple kilometers of altitude.

Is this a normal phenomenom and what causes it? 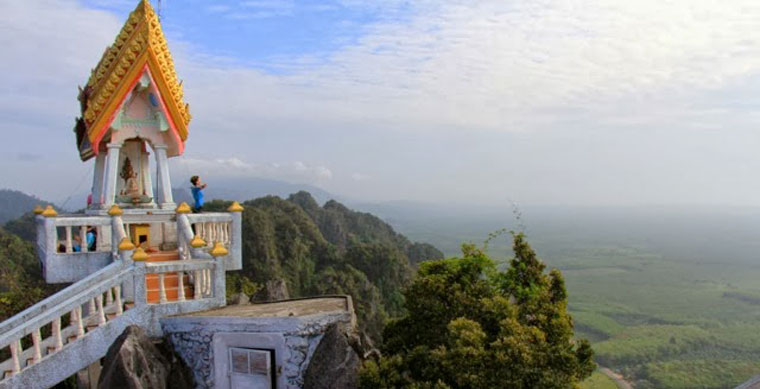 The haze in northern Thailand is indeed a yearly phenomenon, but the main driver for it is local farmers burning fields to prepare for planting in the following wet season. Since it's the dry season, there's nothing to contain or tamp down the smoke and dust, plus there's 'normal' air pollution from cities, cars etc in the region. Throw in the local topography — valleys surrounded on all sides by mountains, no open ocean nearby — and you get pretty bad haze.

Some of this obviously filters down all the way to Bangkok as well, although that city has pretty bad air all year around thanks to plain old smog. You were pretty unlucky to get hit in Krabi as well though.

This is all somewhat different from the Indonesia/Malaysia/Singapore haze, which is caused by (mostly illegal) jungle clearance. Having experienced both first hand, this style of haze is both much more unpredictable, as it depends on wind direction, and much worse on a bad day, since a burning jungle produces a lot more smoke than a few piles of rice straw on a paddy. Since most of this originates from Sumatra and Borneo, it's unusual for it to make it as far north as Thailand, but if Malaysia really gets walloped then the southernmost bits of Thailand may be impacted as well.

While I can't be sure, I think this is a case of haze due to smoke from biomass burning.

There was an episode with a lot of burning events in February and March in Northern South-East Asia (the pictures are satellite pictures where active fires are highlighted). This has been reported in the region (news article, Singapore meteorological service), and is a well-known and annually recurring problem. Most of the fires are started by farmers to clear land, or for various other reason and tend to go out of control.

It also makes sense that the smoke will stay in lower altitudes (depending on weather). Of course this could be due to some other phenomenon that I am not aware of. If it was indeed smoke, then you might have noticed a burning smell in the air. Note that this seems to be a not so bad case and that visibility can get way worse.

Not the answer you're looking for? Browse other questions tagged thailand weather-and-climate or ask your own question.

8
Where to go in Thailand in September?
3
Why do some accommodations in the Khao San Road area of Bangkok only offer Wi-Fi during daytime hours?
11
How do I figure out what costs me to stay a month in Bangkok, Thailand
2
Cellphone in Thailand
2
Thailand in October - Weather
1
Entering Thailand with a type O non-immigrant visa
13
What's the status of this border crossing between Thailand and Cambodia?
9
What's a reasonable booking fee percentage in a Thailand travel agency?