Are there cheap GPS or other navigator devices with downloadable maps for the whole world?

I don't need a recommendation or a list but my knowledge of GPS and "navi"s and the differences between them is an utter mystery to me.

But often I'm lost in backstreets in random countries where access to something like a live Google Maps would be awesome. I absolutely cannot afford a smartphone with worldwide roaming though.

Can GPS's do what I want or am I barking up the wrong tree? If they can is it only high end ones than can?

If you have a Nokia Symbian device, then you can get Ovi Maps installed on it. Ovi Maps allows you to download map files for as many countries as you want and store in on your memory card. Once that's done, you can set Ovi Maps to offline mode and still be able to use it to get directions. If you get a local SIM, then it will be able to show you rough location data too.

I find Google Maps' public transit planning feature very handy too but I often cannot use it on roaming. Instead, I use this app called Métro (available for iPhone, BlackBerry, Symbian, Windows Mobile, PalmOS - no Android or Windows Phone 7 version yet) that allows you to store public transit information data offline for many major cities around the world. The full list of supported cities supported by Métro is available here; you can also use the same page to customise your download in case you do not want the full package. They are fairly regular with keeping their database up-to-date too.

EDIT: Google Maps has recently launched a beta feature (only on Android phones though) that allows you to save map data for a specific radius on your phone for offline usage. Not as useful as downloading maps for a whole country like Ovi Maps allows, but if you have wifi access every now and then on the road then you should be able to take bits of Google Maps offline on the go.

EDIT 2: Android users can also try out the free MapDroyd app that allows you download offline maps country-by-country. The maps themselves are mostly barebones with no point-of-interest data.

There are different handheld GPS units. My favourite is the Garmin eTrex. Garmin's own MapSource maps are usually quite expensive and require annual updates.

OpenStreetMap is a nice alternative; you should check the site if the coverage in the required area fits your needs. The quality of data is quite okay too. The map data can be stored offline in a Garmin handheld GPS unit, thus negating the need to have a mobile phone or a global roaming plan. I am still amazed that all of Europe's maps fits on a small Micro SD card as big a my small toe nail.

Firstly, even if you COULD get offline Google Maps, it's not that useful in non western countries. Murmansk - the largest city in the arctic circle, is shown as just two streets in Google Maps. Most of their coverage of Central Asia is next to useless as well.

In addition, you need some serious storage for offline google maps. What I eventually settled with was NavDroyd - for Android, but there'll be equivalents for iPhone etc. It cost a few dollars, but not much - and the maps are all totally free, as they just download the free Open Street Maps maps, which are vector graphics anyway. It was fantastic. The interface was a little clunky to me and took a few minutes to get used to, but once I had it sorted it was brilliant - even in Siberia, Kyrgystan and Mongolia!

And being back in London it's pretty fantastic here too, although I find it easier to use Google Maps here as it includes other information I look for (Latitude).

I've got a smartphone which can cache maps locally (it's a Nokia N900, but lots of other ones do that too, with a few notable exceptions).

Before I go somewhere, on Wi-Fi I browse around the area I'll be visiting, so the phone downloads all the maps. When I'm there, I can then navigate around without needing to download anything, just using the cached maps and the GPS. I can also browse around the surrounding area too, which is handy for planning and orientation.

Also has the bonus of using a gadget I already carry with me, so I'm less likely to forget it!

A cheap unlocked Android phone with GPS (they start at $120 or so) plus a free offline maps app like RMaps. You don't need a data connection, but have the option of popping in a cheap local prepaid SIM card for calls and net access.

Then you can use Mobile Atlas Creator 1.8 to download relevant maps from different sources before you go (or using a laptop and hotel WiFi while on the road).

A smartphone is most a superset of what is offered by a GPS unit. GPS will be optimized for battery-life and ergonomics but an offline map application will allow you to navigate using a smartphone without a data plan.

You can download world maps by country or sections for large countries, so you do not need to have the whole world stored on your phone. When you have internet, download the next couple of countries on your path and neighboring countries for good measure. Actually, you may be able to store the whole world. As reference, my phone currently holds maps for 70 countries and that uses 8 GB, so with a MicroSDXC 128GB card, there are larger sizes but those are very cheap (under $30) and that's the max supported by my phone.

There are numerous applications that give you access to offline maps. The one I found that works best is MAPS.ME. I have no affiliation with it but I was honestly surprised of how many travelers I meat that use that app. It runs on Android works even on a less powerful phone, so you should be able to run it cheaply if you do not already have an Android phone.

MapDroyd gives you downloadable offline maps but this is limited to Android phones. I tried this on my phone and did a comparison with Google Maps a year ago. MapDroyd had quite a bit of work to catch up with Google.

I don't need a recommendation or a list but my knowledge of GPS and "navi"s and the differences between them is an utter mystery to me.

Fundamentally a GPS receiver, better called localizer is a radio tool that will provide geo coordinates to another piece of hardware.

A navigator is a computer device with an embedded or external GPS that will show maps and directions based on the input from the GPS and your desired route.

You don't need a list but here are examples of navigators 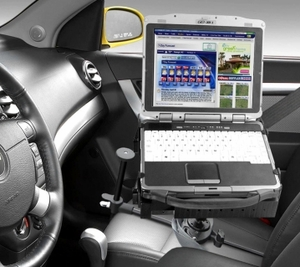 One thing to note: in natural language we refer to GPS for any localizer. But a localizer is a broader category of devices that include those that don't necessarily work with US Global Positioning Service (e.g. EU Galileo), but I'd myself improperly call a Galileo device a GPS should I have it my hands

For the iPhone, there's an app called Galileo that you can use. It uses Openstreetmaps data. You turn the caching feature on in the app, then when you're in the hotel, you navigate to the place you want to go, and grab all the data. When you leave that place, you can purge the cache to free up space for the next city. I found this to be really useful, since you can decide how granular you want your mapping data to be. In some places, like say Hamburg, you're only going to be concentrating on a touristy portion of the city, not all of it, so you don't really need to download the other 95% in level 50 zoom.

I recall an Android app called Sygic which allows you to buy the entire world by multiple maps.

Volkswagen allows you to download up to date maps but these are separate maps and most likely require several SD cards to be swapped. If you really plan to drive from Portugal to Argentina ferrying via Northwest Passage, you wouldn't probably care to swap cards while fueling.

But often I'm lost in backstreets in random countries where access to something like a live Google Maps would be awesome. I absolutely cannot afford a smartphone with worldwide roaming though.

If that is your scenario, you should download in advance a Google Maps offline map for the area you expect to be in. I think that sometimes the most practical solution isn't necessary the most complete

Not the answer you're looking for? Browse other questions tagged budget gear maps gps-navigation or ask your own question.

12
Are there any good, cheap bus companies to use for traveling around the western United States?
16
Are there still any "cheap" options for flying from Australia to Mexico without going through the US?
8
Why are there no road maps for Iceland for my TomTom device?
12
Are there offline maps for WiFI locations while traveling
6
Are there any good radiation measurement devices to recommend when traveling to places with high radiation?
16
Are there online maps showing the speed limit on the German highways?
13
Does a metric for road quality exist and are there maps showing it?
10
Is there a way to get offline maps of China for Windows devices as I have no iPhone or Android?
5
What accurate offline GPS apps are there for the whole island of Cyprus?
17
Is there a Google Maps like app that shows directions and other people's progress along the same route?