Where can I see snake charmers in India?

I know that snake charming is mostly a myth nowadays in India; yet, are there some places, likely tourist traps, where one can see this marvelous performance?

Same question for the rope trick, another forgotten art.

I don't know of any organised places where snake charmers meet (the equivalent of a Jemaa el-Fnaa square, Marrakech for example). Moreover India is a fairly large country so there's no way to definitely rule out this possibility.

However I do recall setting quite a few of these performances randomly on the street. I would usually find them outside, or in the vicinity, of highly dense tourist areas. Off the top of my head I remember three of them sitting outside the Window Palace in Jaipur, Rajasthan.

You could also try visiting a few New Delhi markets on Nag Panchami, the yearly religious festival in honor of the king cobra. This site mentions there being fewer snake charmers around every year, although some can still be found by searching hard.

Beware that stopping to watch or taking a picture means being asked to pay a few rupees.

I used to be friends with a whole lot of snakecharmers in Jaipur. They worked (put on displays) at the Rambagh Palace hotel and at Clarks Hammer hotel. They also used to wait at the railway crossing near bajaj nagar. Things may be different now that it's illegal, but surely, people will still call upon local snakecharmers if they see a snake in their house or shop?

I went to weddings and stayed in their villages and camps, and they stayed or visited me in my flat. They were great friends, fun to be with, very nice. I was lucky to know them.

Once I was staying in one of their villages and we were all sleeping on string kots in the open, and three men arrived on bicycles to ask the snakecharmers to remove a cobra from a house in a nearby village. Some of the experienced catchers of cobras got up and went with them. I wanted to go too, but they said it was a risk and I shouldn't go. A few hours later they returned, but said the snake couldn't be found.

Good luck - I hope you enjoy India. There are many groups of interesting people there.

Consider this "related" :-):
Snake charming is now illegal under animal protection regulations.
Snake charming happens.
I assumed that any Cobra in a public display would be rendered harmless. Stands to reason , doesn't it. But, this is India. After the events described below I discovered that Cobras cannot be safely and permanently devenomed. If fangs are removed they grow back. Some sew the snakes mouth shut. Generally, if you stay out of the way of the Cobra you are likely safe enough. If you don't ... 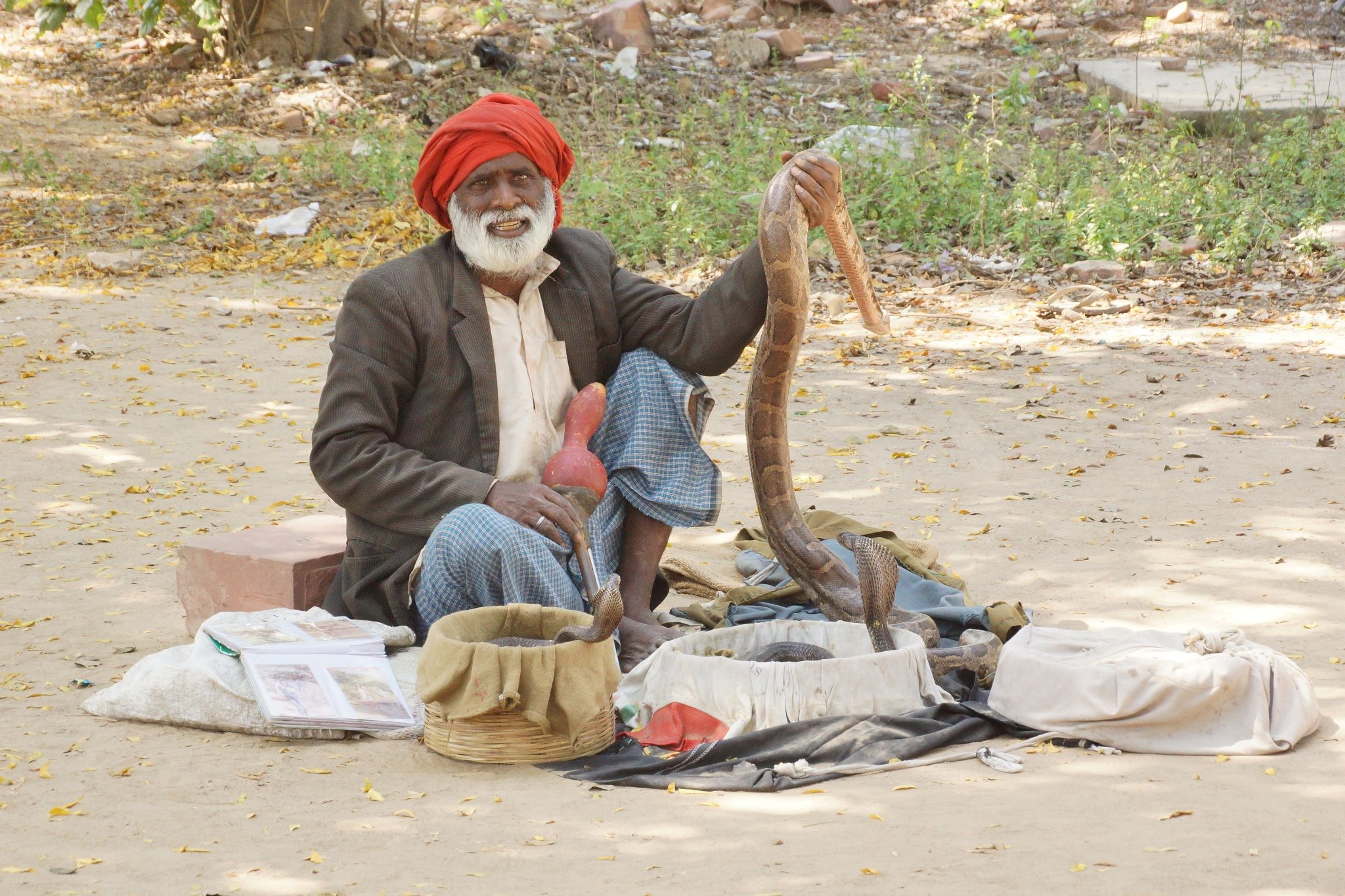 Big Cobra, little Cobra, what begins with C? ...
Defanged, they'll be, my precious.
Almost certainly they were. One hopes!!!
Charmed they are. Whatever.
Old, slow, tired. Done this a zillion times. Get up out of your basket and sway. Big deal. Boring.
Russell gets down for a Cobra's eye view. Not THAT close. Not a worry. What can one old man's old snake do.
Wow - a break from boredom, apparently.
Let me count the ways ...
Big Cobra strikes at not too too much below the speed of light.
BUT, the old man is Tachyonic and prescient.
Grab!!! Big Cobra is grasped in his hands.
Stupid photographer never got to feel snake on glass.
Fast and faster! Wow.
I could have sworn he clearly said something that sounded suspiciously like "no you don't" in good English. But, given his utter lack thereof at all other times, probably not. More likely a Hindi invocation against stupid and not quite yet brain-dead tourists.

Note between the middle and right hand baskets - the python is making yet another futile bid for freedom. 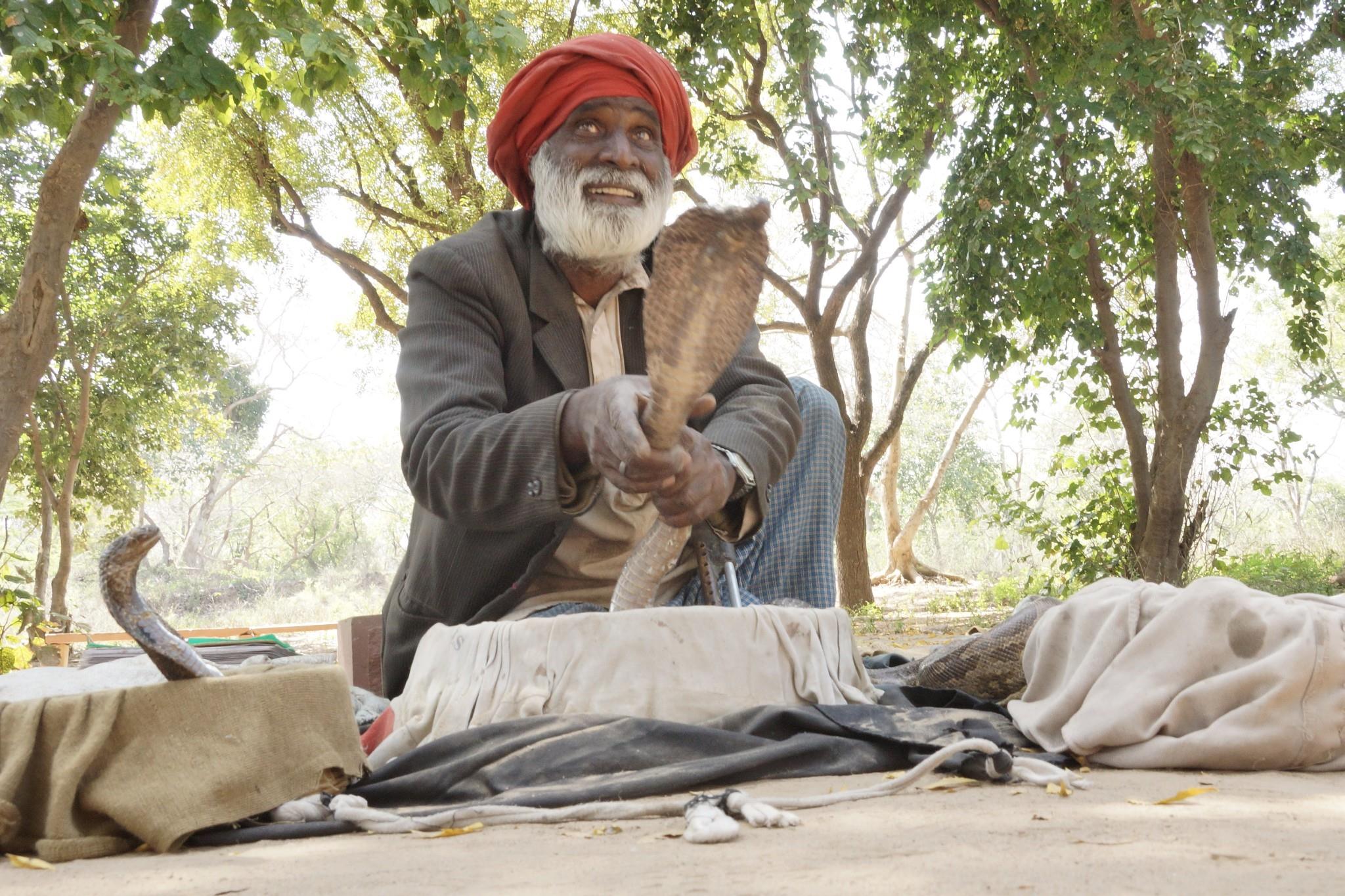 Please use the link below link ONLY if you do not have a Facebook account.
The above link goes via bit.ly and gives me an idea of how many people have looked at the pictures. It logs accesses to the country level only. ie no user details known to me.
Non Facebook users

Not the answer you're looking for? Browse other questions tagged india entertainment local-knowledge or ask your own question.

10
Where can I see a Mbalax performance in Dakar?
14
Where in India can one wash and play with elephants?
19
How do I become a better tourist guide for my own city or country?
14
Can foreign tourists see Pakistani dancing girls?
8
Where in Cluj can I play airsoft?
16
Are there “issues” when wanting to travel to, from, between Pakistan, India and Bangladesh?
7
Practical aspects of security when travelling in India
64
Hard time proving I am the same person as seen in the passport photo taken 9 years ago
1
Required vaccinations for South Africa and how much time before?
5
Indian custom: Gifting sweets when returning from travel