Why do airlines (typically?) require customers to phone for special meals, and not provide this option online?

When travelling on flights where meals are included, travellers who need special meals, such as vegetarian or kosher, are, in my experience, typically required to make such a request by phone.

For the traveller, this might mean a 15 minute hold, followed by a 1 minute phonecall. After all, the operator simply needs to make an entry into a database somewhere.

Why don't airlines offer seem to offer travellers the option to select their special meal request through an online interface? Or do I just have the bad luck to happen to fly with airlines where this request can only be made by phone?

I am no definite expert on the topic but this customization of a flight, called ancillary services, are usually marketed to travel agents as a profit generator.

First let's clarify the different actors. The airlines offer and operate flights, the GDS (Global Distribution System) companies distribute the flights to travel agents and the latter sell to the traveller (you). The travel agents can be your local travel agent in his office, the online travel agent (OTA) like Expedia, Opodo or Kayak, or the airline itself through its website, phone service or offices.

In all cases the travel agent decides which ancillary service to sell to the customer. The travel agent probably pays to implement the service distribution (to the GDS) and receives a fee per transaction made. As meal selection is not generally a lucrative option - it is usually free of charge and I think religious or allergic people would react badly if they had to pay to get a specific meal - it is not worth offering for the travel agents. As @drat commented, the airlines have also little incentives (and higher logistic costs) to offer them. So it makes sense not to offer meal choice directly online. Note that some OTAs offer a free text field at the end of the booking without promising it will be read by anyone (I have seen that on govoyages, for example).

In the case of Emirates and Singapore Airlines, I have in mind that their image is based on open-mindedness, globalization and respect of the culture of the travellers. I insist on the fact that it is the image I have, you might not feel the same. But offering a choice of meal is a good marketing argument for a world-wide growing airline. On the opposite, Air Transat mostly targets Canadians visiting the Caribbean and transatlantic travellers, with less of a variety of travellers. Offering a large variety of meals would be more a burden than a marketing argument to them. And Air Transat offers ancillary services on their website like seat selection, so it is a deliberate choice not to offer meal selection.

In the end, I suppose that the reasons are economical. It costs less to offer less choice and not to prepare too many meals. It depends on the travel agent you buy your tickets from, but there is no rule for who offers meal selection or does not. If it matters a lot, you can try to buy your ticket from another travel agent, it might work better.

Either you've been misinformed, or we're travelling on different airlines...

For a flight I have next week, I've just logged into the "Manage My Booking" section of the airline's website (BA). Once I pick the flight, I see this: 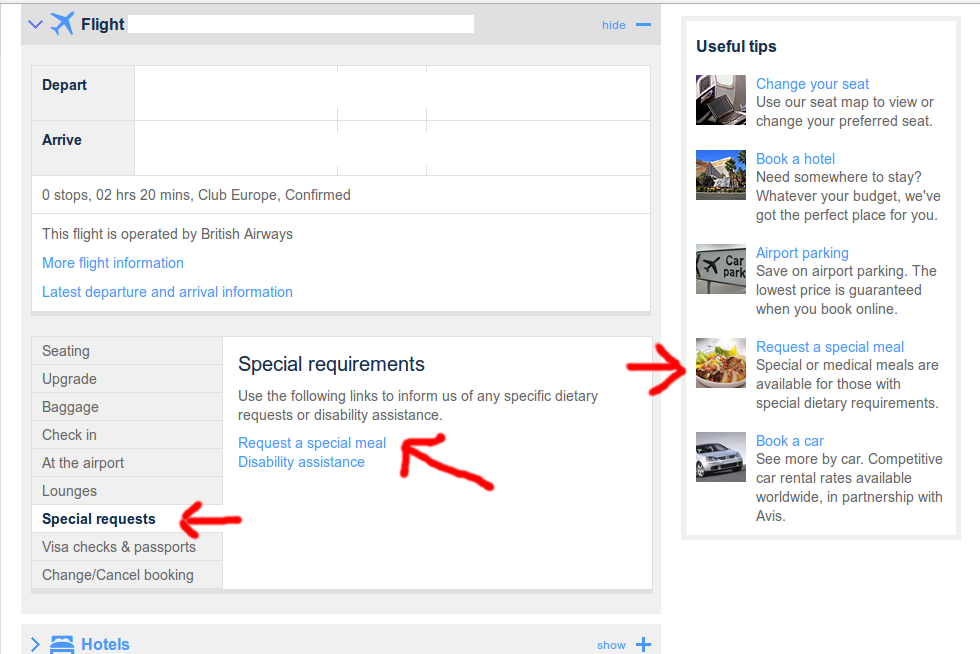 By picking the Special Requirements link, I can request a special meal, and additionally on the right hand menu of special options it offers it there too!

Next up, trying a flight with Qatar Airways for several months time. After going to Manage A Booking, there's a section there called Flight Special Requests, which currently shows my seats, and that I haven't requested any special meals. Hitting the modify button brings up a page where I can pick special meals for each flight, including a fairly good list: 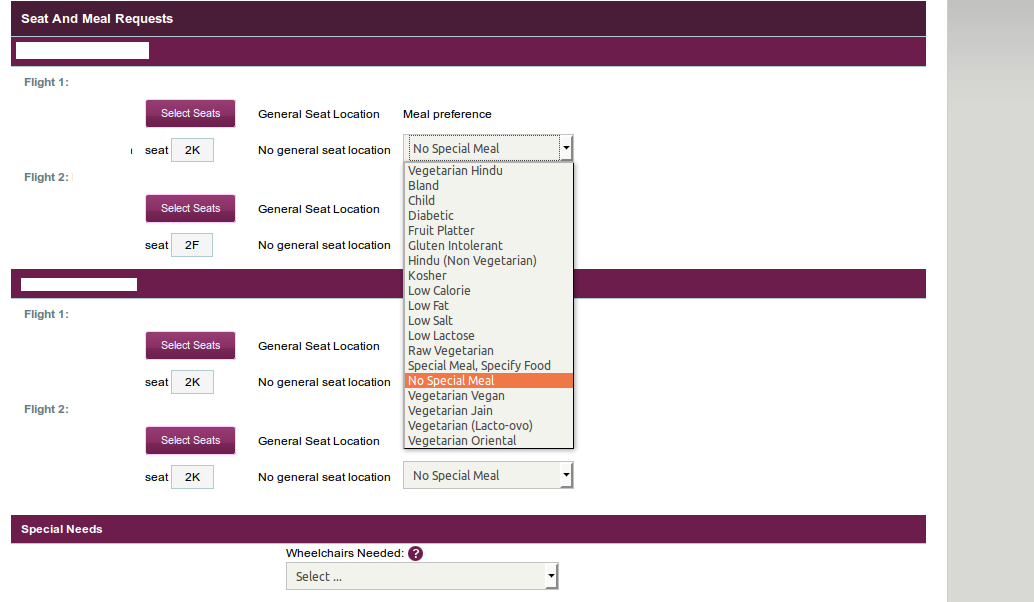 Once you have booked your flight, be that with the airline, or a travel agent, or a website, you'll get a booking reference (normally 5 or 6 characters). Go to the airline's website, pick Manage My Booking or similar, and look for something like Special Requests, then from there pick your meals. As long as you're flying with a moderately decent airline, you should have no problem doing so, as shown above!

Airlines provide special meals as an accommodation for special needs (religious, medical, etc), not as an a la carte option. As such they make it something you have to request direct, to indirectly limit it to those who really need it. Allowing passengers to essentially order a la carte online makes catering the flight more difficult and more expensive.

Some airlines do allow you to save your special meal needs in your frequent flyer profile, others allow you to choose at the time of booking, but many make you order it special.

Not the answer you're looking for? Browse other questions tagged air-travel food-and-drink dietary-restrictions or ask your own question.

4
Why do airlines prohibit telephone calls on planes with mobile data and Wi-Fi capabilities, yet provide an onboard telephone service?
10
Are airlines not liable for damages and losses to the contents of luggage?
13
Missing bag report swindle
70
Why do airlines offer more varieties of special-request meals than they actually provide?
7
Why do airlines ask for passport during boarding and not any other document?
112
Norwegian refuses EU delay (4.7 hours) compensation because it turned out there was nothing wrong with the aircraft