Can I still visit a "movie TV" establishment (MTV) in Taiwan?

I have read that before KTV was invented in Taiwan in the 1980s there were similar places for watching movies in private rooms called MTV but most closed around 1988 due to new intellectual property laws but that a small number survived by raising their prices.

Are there still any MTVs operating in Taiwan? Where can I visit one? I might be back there in a few months after I visit China and I've become fascinated with this topic.

This is hard to Google for since MTV is also a cable TV channel and since most of them closed before the Internet took off.

(I'm strictly looking for places using the term "MTV", "Movie TV", or "movie television". If it's something kinda the same but not using that term it's not an answer sorry.)

Yes you can. There are still some in Taipei. U2MTV is one of the chains. You can pick the movie you want from the shelf (they're all legit copies, btw), then check out and pick a room. You can also order food from them for you to enjoy.

Just FYI, it's popular among teenagers because of the private suites... and you could guess what they might be doing in there... So, not the best place to enjoy the movie alone.

Yes there's still some operating. I visited my first one today in Kaohsiung, not to watch a movie, just to satisfy my curiosity.

Facade of Open MTV in Kaohsiung: 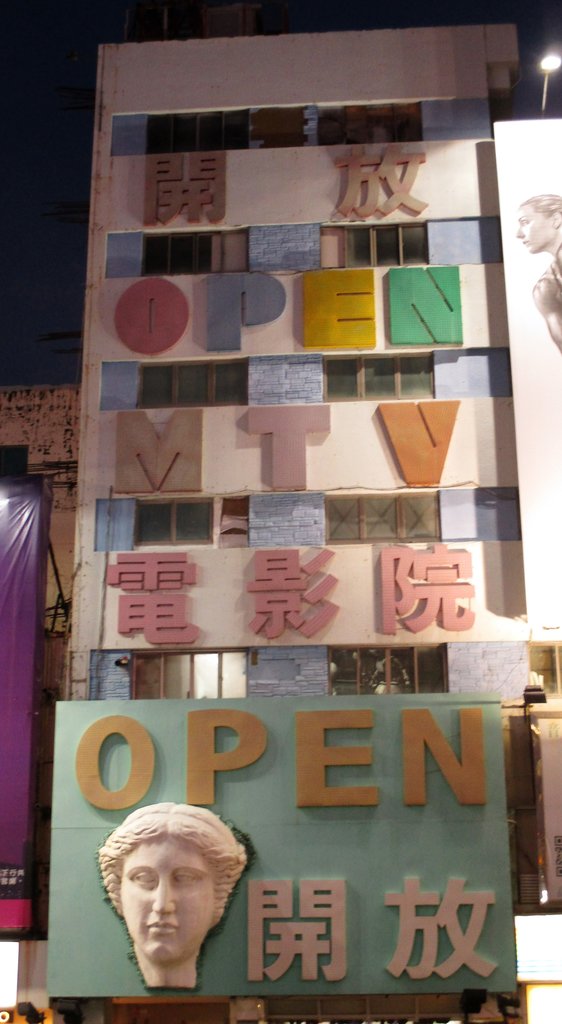 Apparently Open MTV only has older movies, from all eras, but not current releases. They also have TV shows.

Inside there were shelves and shelves of movies that looked a lot like a video rental place. There were "no photo" signs up so I didn't take any photos. The staff couldn't speak English so I couldn't ask them how it works. I'd say foreigners rarely visit.

Some of their information from a poster outside: 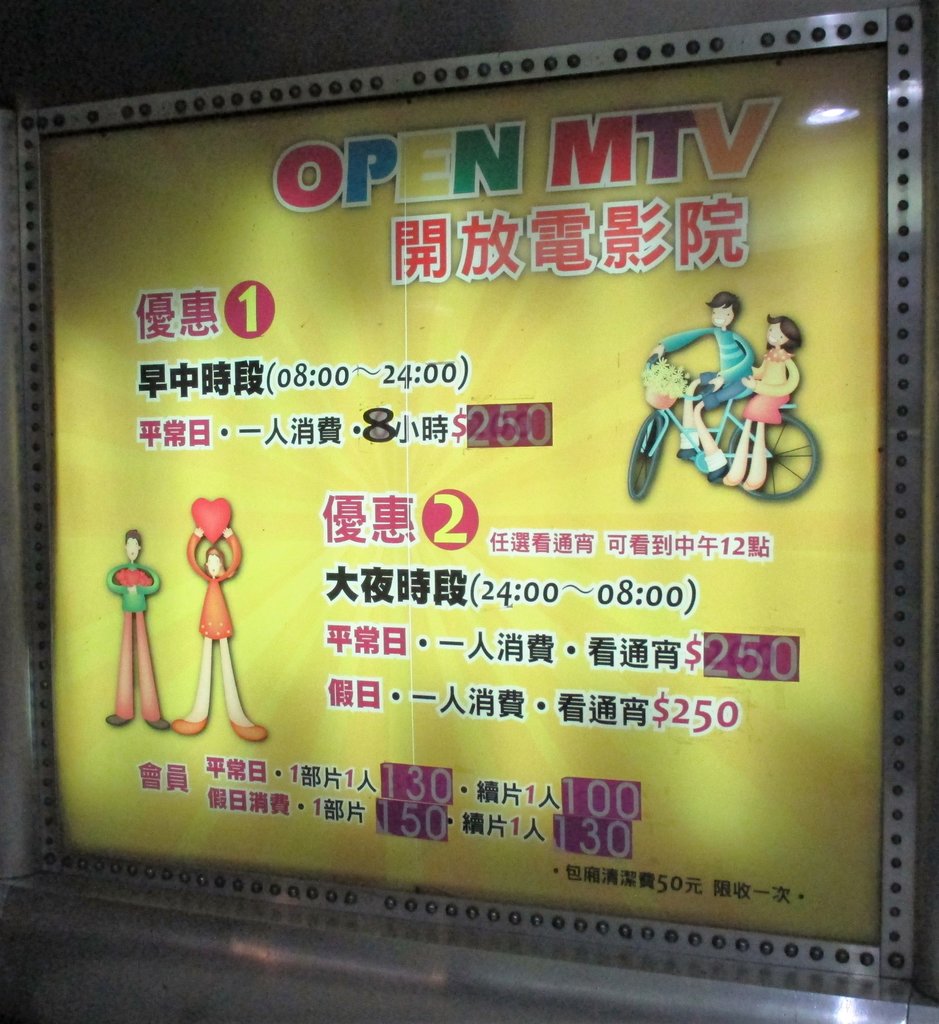 (I would really appreciate it if somebody could translate the Chinese here. I have a hunch this could turn out to be a cheap alternative place to crash, a bit like manga cafes and internet cafes in Japan.)

In my other research, I have learned that there are two main MTV chains in Taiwan: Kiss, and U2.

If I understand correctly, you want to visit these make shift not so legal mini theaters.

The last time I saw such a thing was in a small town in India, and that too at least a decade back.

Basically, it was a shack/ tent where VHS/ or older prints were shown as small towns/ villages did not have/ could afford big movie theaters and people had no way of seeing movies besides these 'mini' theaters.

Given the satellite tv, cheap vcd/ dvd player, pirated media, downloaded media these days, you would be hard pressed to find such a place.

But, who knows there might be some remote corner where such a place is still operational and the operator peddles all of the above to a remote tribe for a small price.

Not the answer you're looking for? Browse other questions tagged taiwan entertainment or ask your own question.

10
Can I get a Taiwan visa from China?
2
Where can I try sea cucumbers in Taiwan?
8
How can a citizen of Mainland China visit Taiwan?
15
Where can "public showers" be found in Taiwan?
10
Is the fast ferry between Pingtan, China and Taipei, Taiwan still going?
2
Where can one find Plus ATMs in rural Taiwan?
4
Can I buy tickets for Taiwan high speed rail in advance online?