When flying, are you allowed to bring battery packs / power banks? I'd like to bring my ACC 10400mAh Power Bank on several flights.

There are limits that were introduced by the US Federal Aviation Administration. Those have been used as well by numerous other airlines, for example Cathay Pacific. They generally impose a limit on capacity per passenger and on top of this disallow checking them in, so you must take them into your hand luggage.

If a website lists grams of Lithium, use this formula (source):

Equivalent Lithium Content (ELC). ELC is a measure by which lithium ion batteries are classified.

There is additional information available from the TSA and the IATA.

Some more information here from Thailand, as of Jan 2015 (sorry, a bit shaky)L 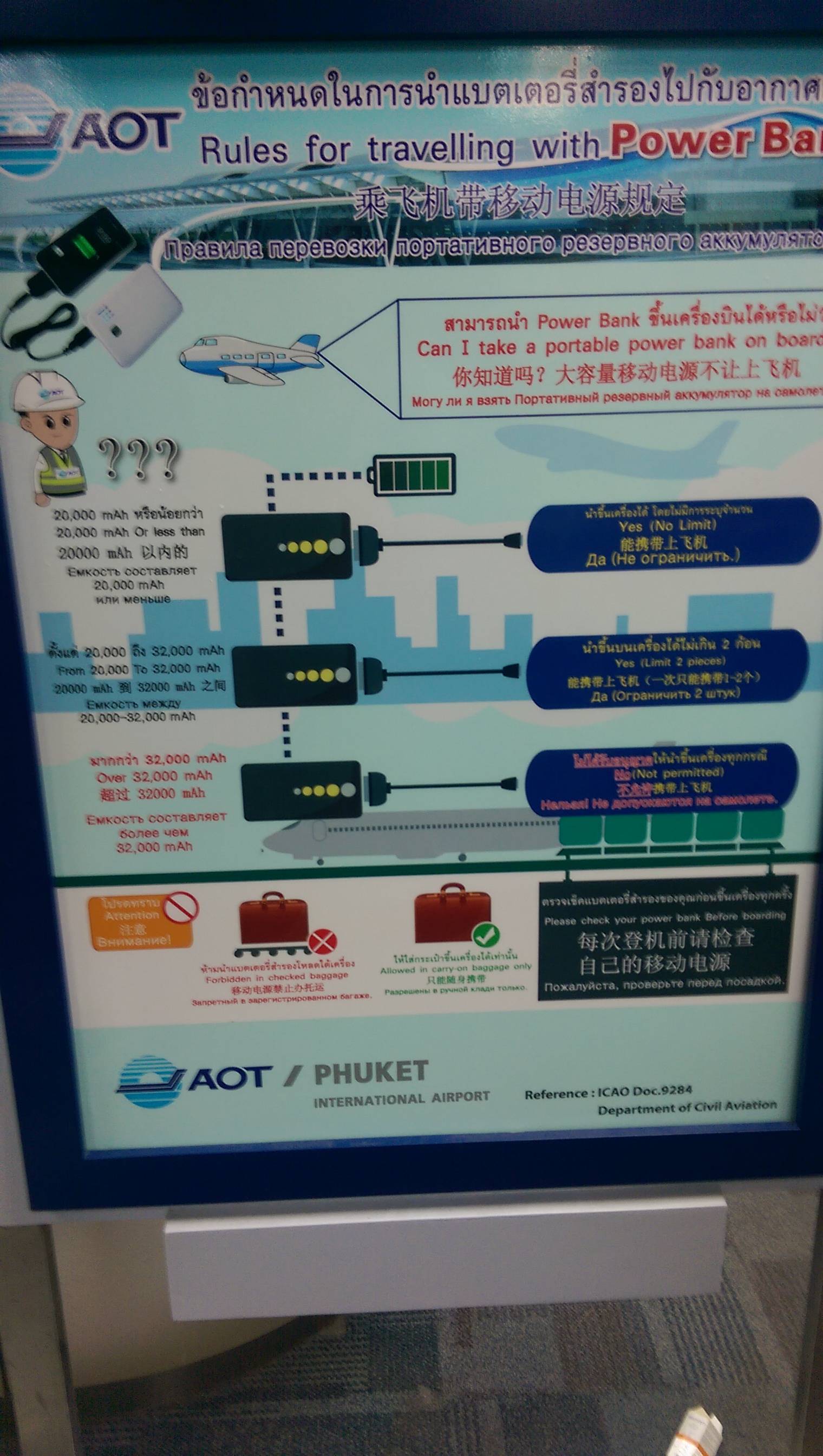 Essentially, anything above 32'000 mAh is forbidden, below that and above 20'000 mAh is limited to 2 per person, below that there are no limits, but all only in hand luggage.

I've had two battery packs / power banks, and travelled to several countries with several airlines, taking them as carry on, without any problem...until...

Last year, I flew from Tokyo Haneda, via Beijing, China to Vancouver, Canada. In Beijing, Chinese officials sent me to a security point, where several people including myself had our power banks taken off us, to our protest. More on the situation here.

In the end, I believe - from what they told me, it was because it didn't indicate the amperage / capacity anywhere on the device. Which seems pretty dumb to me for a reason - it's still a commercially made product (made in CHINA), but yeah, they confiscated it.

I also saw signs in Taiwan stating that they had to be in carry-on, NOT checked luggage for some flights, so yeah, you should be fine taking it in carry-on.

There have been rules re carrying batteries for many years.
They may be found in (at least) IATA documentation and also a number of courier companies and most battery manufacturers have advice documents.

Removable batteries must be carried in carry-on luggage with the exception mentioned below. Having batteries in carry=on makes sense - would you rather have a fire in a cargo hold or an overhead locker. (Answer: No! :-)).

There is an upper limit to the amount of Lithium metal that may be carried. Some manufacturers provide specific mass of Li per battery. Otherwise they have a linear conversion between Watt hour of battery (Vbat x mAh.) and Li metal.

On one occasion I travelled with a laptop with large battery, + spare battery + 2nd laptop + maybe 6 x camera batteries (7V2 x ~= 1500 mah). I was approaching but still under the Lithium metal limit.

China are a power unto themselves - they make up rules that others do not have. Export rules for batteries via eg Fedex do not apply to hina battery exports. Batches of batteries need a per batch test house certification that they meet certain standards. This apparently excessive zeal is because people are willing to ship dangerous junk and misdeclare it. Presumably the certified test houses have had it made very clear what will happen if they pass junk.

There are rules re battery carrying which vary somewhat. Some systems allow carrying loose batteries with ends taped otherwise rendered"safe" from accidental shorting. .

By IATA guidelines, that would be well under the 100 W∙hr limit for lithium ion batteries. The IATA guidelines list additional conditions to be met as well. (They must be genuine, certified batteries, for personal use, in reasonable quantities. If being carried as spares, they must be protected from short-circuiting.)

Mine with 20000 maH was taken by the officer in charge at Krabi's Airport. According to them it is too big and they can't allowed me to carry it.

Answer A: It will depend on the capacity in Wh (watt hours) but most commercially available ones should be OK. The IATA guidelines say that under 100Wh (multiply Ah x V to get Wh) is OK to bring on board and in cargo if installed in equipment. If they are loose spare batteries you can bring as many in carry on but not in the hold. Between 100-160Wh same applies but you are restricted to 2 spare loose batteries and again not allowed to check in. If over 160Wh you have to declare it and it has to be packed in cargo under the Dangerous Goods guidelines.Most airlines follow the IATA guidelines.

Answer B: only restriction I found was that the battery must be under 100Wh. Keep in mind that you have to validate the rules for any Airlines you will be flying and the airport rules if they are not in the US. It must be in hand luggage and not in a suitcase in the hold.

Answer C: They may be found in (at least) IATA documentation and also a number of courier companies and most battery manufacturers have advice documents. Removable batteries must be carried in carry-on luggage with the exception mentioned below. Having batteries in carry=on makes sense - would you rather have a fire in a cargo hold or an overhead locker. There is an upper limit to the amount of Lithium metal that may be carried. Some manufacturers provide specific mass of Li per battery. Otherwise they have a linear conversion between Watt hour of battery (Vbat x mAh.) and Li metal.

In order to ensure air transport safety, FAA,IATA, Airport has issued relevant regulations to regulate air passengers and crew members carrying power banks on to flights. The rated energy of power banks which can be carried on board is restricted and identification method for rated power has also been specified. For details, see the “Announcement of Rules for Air Passengers Carrying Power Bank onto Flights”.

Not the answer you're looking for? Browse other questions tagged air-travel airport-security hand-luggage batteries or ask your own question.

2
Large tech allowed on Intl. flight?
3
Can I take a fully-charged portable phone charger on a plane?
2
Can I take my battery backup/energizer/secondary power source in flight?
2
I plan to go US, Can I take my portable charge to the airplane? It is a EasyAcc 20000mAh power bank
1
Is it possible to have 2 10000mAh power banks in a single carry on?
56
What rights do you have in China to appeal stuff being taken off you in transit?
25
Is it against regulations to pack my laptop battery on its own in my checked luggage?
24
Do Chinese customs agents check the contents of Kindles and notebooks?
21
Can you carry drones (eg. DJI Phantom or Inspire) on a plane as a carry on?
8
How to calculate if my battery will be allowed in hand luggage? (Voltage in mAh to Wh conversion)
See more linked questions

8
Do airlines really check whether battery packs for laptop/phone/tablets are less than 100 or 160 Wh?
6
Max no. of Power banks allowed in Carry on - Air China
8
How to calculate if my battery will be allowed in hand luggage? (Voltage in mAh to Wh conversion)
8
Power banks over 100 Wh, but not exceeding 160 Wh - how does airline approval work in practice?
14
Are snow spikes for boots allowed in hand luggage?
3
Carrying a laptop battery with a cracked case onto a flight
23
How does airport security verify that you can carry a battery bank over 100 Wh?
7
3D Pen in hand luggage