Which border crossing should I take between Ecuador and Peru

There are four border crossings between Ecuador and Peru. In order of importance:

I have heard the main one at Huaquillas can be sketchy or even outright dangerous.

I guess nobody here has used all four of them, but is it safe / possible for the average traveller to do?

After hearing about negative experiences at the Huaquillas crossing from several people, I decided to use one of the other border crossings. I also wanted to visit the small town of Vilcabamba south of Loja, which is on the way to the La Balsa crossing.

The town is famous for the high life expectancy of its residents, but also offers great hiking in the surrounding hills.

I stayed a few days in the Hostería Izhcayluma, a great hostel in the hills with a nice garden, swimming pool and delicious food. 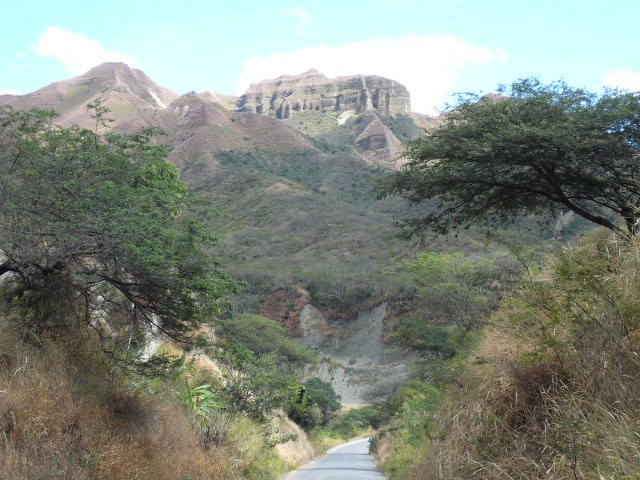 The journey south began at 7am on a local bus that goes to a place called Zumba further south, this is as far as the proper road goes. There we had to changed into a truck/bus thingie which took us the last part to the border on a dirt road. This was a very slow ride but in a beautiful mountainous landscape through small villages. 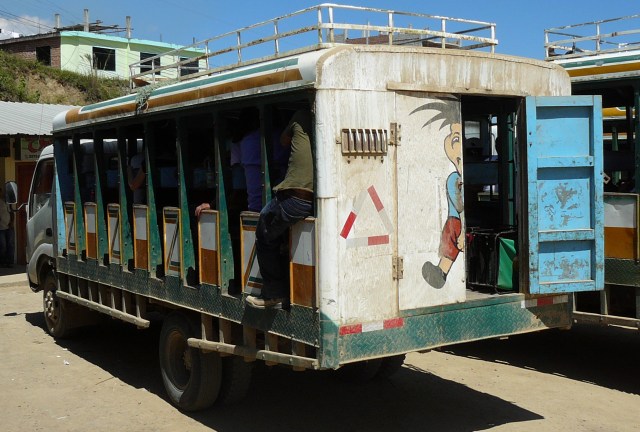 Even though it is only about 80km from Vilcabamba to the border, we got there by mid afternoon (8 hours). The crossing is a bridge over a river with a few wooden buildings on each side. It was easy enough to get the exit stamp on the Ecuadorian side, but in Peru we could not find any of the border guards. With the help of some locals we finally found someone in charge who would stamp our passport. They had not used their stamp for days.

The only option to move on was to go with a private car turned taxi. Still on a dirt road to San Ignacio where we would change into a proper taxi to get to Jaen, the first proper town in Peru. We arrived around 8pm and stayed the night in a cheap hotel.

From Jaen it takes another day on local buses to get to Chachapoyas.

Chachapoyas can be used as a base to visit the ancient town of Kuelap and the 771m Gocta Cataracts waterfall among other things. 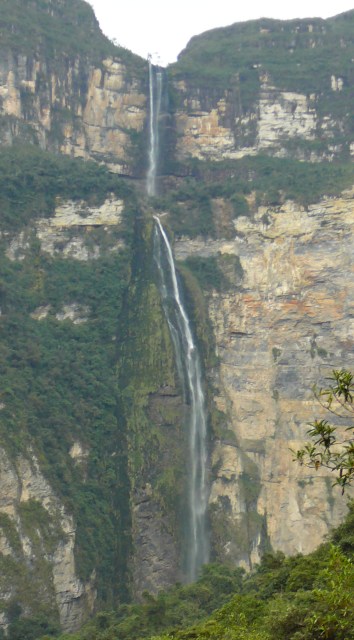 So using the La Balsa crossing takes a lot of time, but gets you off the beaten track and it was a great experience.

I highly recommend visiting both Vilcabamba and Chachapoyas and if you do this, the La Balsa crossing is the shortest way between them.

Last year Ecuador closed its borders for a few days while the President was being kidnapped and all that. Sounded pretty hectic. But by the time I got there (two weeks later) everything seemed fine and easy.

You haven't said which way you're going (Peru->Ecuador or Ecuador->Peru) so I'll assume the former, since it's what I did, and you can reverse if necessary ;)

I was short on time, so had bussed from Lima to Máncora, just in time for the full moon party at The Point Hostel. Quite the experience, I assure you. Anyway, from there you have two options - do it yourself, or do it with a 'guide'. I was grouped up with two others at the time and by 'guide' it's just a guy who shows you where to walk at certain points, but he did make things a lot easier, I'll give him that.

There is a bus from Máncora TO Quito, and certainly towns before it, but as I said, I was short on time. So the bus goes up north along the coast to Tumbes. There it paused briefly, before heading to the border in Zarumilla. Here's when it gets fun.

The Peru part was easy enough. Go in, get exit stamps, avoid the usual money touts swarming around. Then we headed over the river border to the town of Huaquillas. We had to be ushered around and pointed at a window, get stamped etc, and then take our bags out the bus. No explanation of what was happening, but then the bus drives off. A little concerned, we look to our guide, who is already waving down a taxi for all of us, but nearly forgets one as we're about to drive off.

It weaves around the streets, and this is where the guide earns his keep. With no Spanish, you'd have a lot of difficulty finding what turned out to be the domestic bus terminal. He dropped us off, gave us a bag of food for the ride (woo!), and vanished.

We had to look at the schedule and our tickets to realise we had an hour. The guys at the terminal stored our bags for us for free while we wandered the streets (evening time) through some markets, bought some more food, joined up with some Germans and another Kiwi who were coming as well, and then finally boarded the next bus to Quito. A few hours later (well, like 10), we were there!

Conclusion: the border town is 'sketchy', but only in behaviour and confusion - we felt just fine wandering around in partial darkness, in a group at least. But had zero problems in the end, which fits with my travel philosophy of assuming the best ;)

In terms of the other crossings, I can't offer much more, but almost every single traveller I spoke to coming south or heading north had or was going to use this route. So you'll almost certainly see other travellers to group up with if you wanted.

All that is changed, TOTALLY. Both governments have change their offices, outside of town, in the middle of nowhere, super simple, super safe. All in one building, exit from Ecuador / entry to Peru, in all one room. 24h attendance, 3 security guards, and cleaning persons. There is a board with the different destinations and related costs, from this point on, the guard call a taxi from their place of parking and the taxi takes you and drops you at what ever location you choose in town. $5 taxi from Huaquillas - Ecuador bus stop to the border, $12 from the border to the city of Tumbes - Peru, from there, there are several bus companies almost all located in the same area, to choose from.

Not the answer you're looking for? Browse other questions tagged safety borders peru ecuador or ask your own question.

6
Travelling to Peru, Ecuador, Galapagos with kids
14
Vaccinations and medicines for Peru and Ecuador
8
How can I get from Cuenca, Ecuador to Arequipa, Peru?
5
Crossing the US-Canadian border and back
7
Is the new border crossing between Georgia and Turkey at Kartsakhi open to foreigners?
13
What's the status of this border crossing between Thailand and Cambodia?
1
Best way to travel from Peru to Ecuador
6
Updated Border Crossing Status Between Kosovo and Serbia
2
Land border crossing in Italy