Is there a monument I can visit in Ecuador that marks the center of the earth?

Today I've read that the center of the earth is in Ecuador. Is this true? Obviously the equator goes through Ecuador, but how can the surface of a sphere have a center? Besides this mathematical problem: IS there a monument that I can visit?

There is actually a monument called 'Mitad del Mundo' (Middle of the World) in Ecuador. However they claim this is based on being on the equator (it turned out later they were off by 240 meters when choosing the spot).

Why the place is more special (middle, centered) than any other place on the equator I don't know.

It is a bit of a cheesy place but makes a fun day trip from Quito.

A 45 min bus ride from Quito (any local can tell you which bus) will get you to the Equator monument. However as Peter mentioned, it's a bit of a cheesy place. On arrival, there's a huge monument which costs to see, and costs more to go up. However, you can take photos and jump back and forth between "Spring" and "Autumn" or "Winter" and "Summer" as you cross the line. For example, here is me, at the equator: 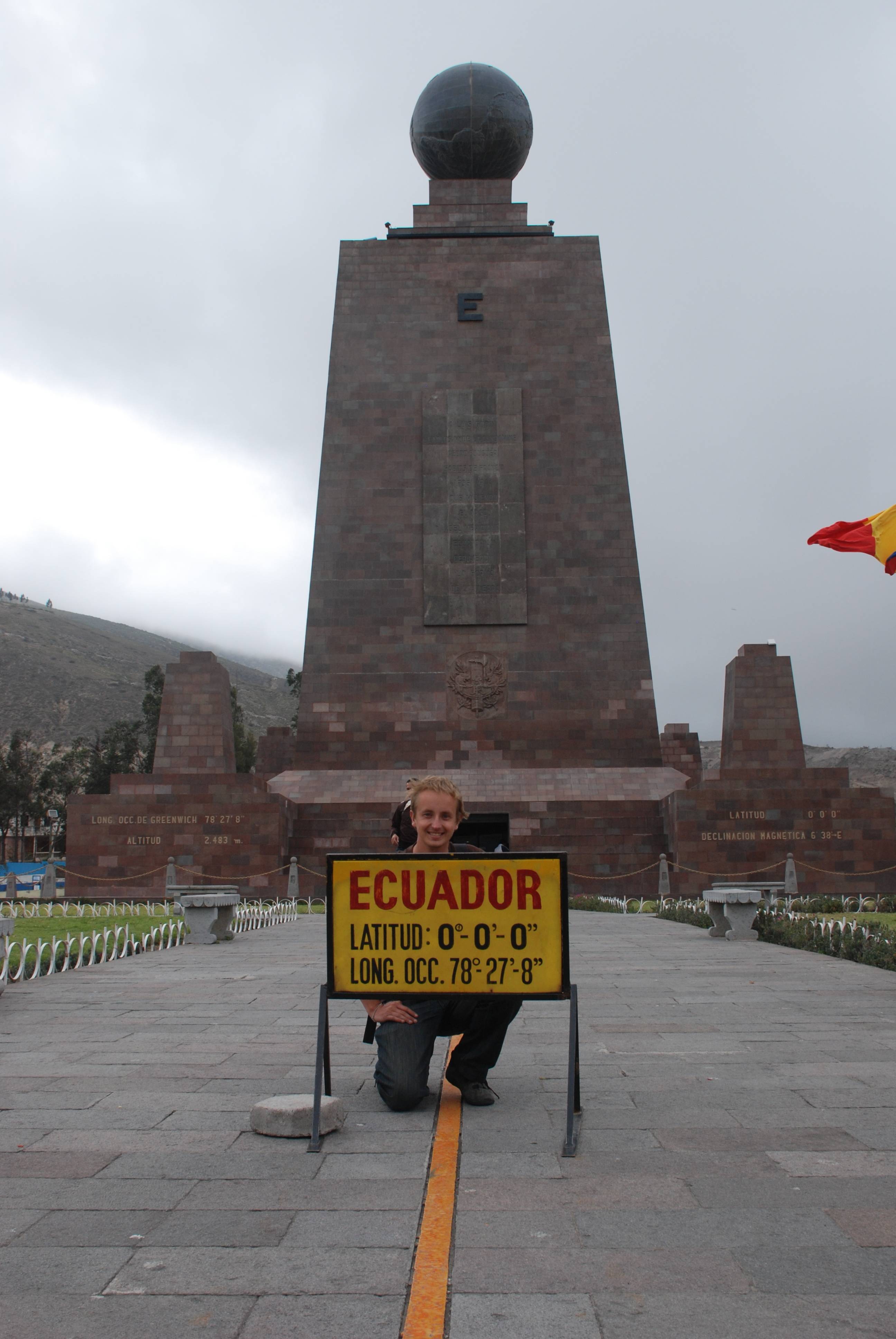 However, it's NOT the equator. They measured it at the time, and took their point of reference. Then later on the army came and did more measuring, and decided it was a couple of hundred metres further north. Conveniently, a little museum and garden was there, so now the line runs directly through them as the 'proper one'. However, since then, more have claimed it's even further north, and that some tribe in the region once built some marker and they were even closer back then!

As it happens, I had my GPS Smartphone on me, and that claimed it was further north still - a couple of hundred metres ;)

In the end it totally depends on what mathematics you use, how you calculate the 'spherical' nature of the earth, and how obsessed you are.

The tour guides at the Intiñan Solar Museum, however, will tell you that you're on the equator and as such can flush toilets on different sides to see the water go down the wrong way, balance an egg on its end, and so on. However, this has ZERO relevance - the latitude has no effect on these at all (yes, the Simpsons were wrong too). The Coriolis effect, normally cited for this, doesn't have that much effect in small, localised situations.

The only other reference Ecuador has to the 'center' of the planet, is that it has Mount Chimborazo (6,310 m above sea level), the top of which is considered to be the most distant point from the centre of the earth, given the ovoid shape of the planet.

Not the answer you're looking for? Browse other questions tagged sightseeing ecuador tourist-traps landmarks or ask your own question.

10
In the Loire Valley, are there any “arty” caves that can be visited?
14
Vaccinations and medicines for Peru and Ecuador
16
How does one get to Lake Vivi, at the geographical center in Russia?
3
When is the driest time to visit Ecuador's El Oriente?
26
How can one visit the Door To Hell?
5
What is the name of the district that is considered to be the city center of Rome?
1
Is it safe to travel now to Ecuador due to earthquakes?
11
Is there any kind of monument or marker for the Tropic of Cancer along the coast on the east side of Taiwan?
1
Queues at Madame Tussauds London with a timed ticket