Visit a volcano in Ecuador

There are many volcanoes in Ecuador. I would like to visit one of these, but which one to choose? I would prefer one that can be reached in a 2-3 day tour from a nearby major city. Do I need any special permit? Or is it necessary to do it in a guided tour? Are there any volcanes that I can visit on my own?

I went to Cotopaxi, several hours south of Quito: 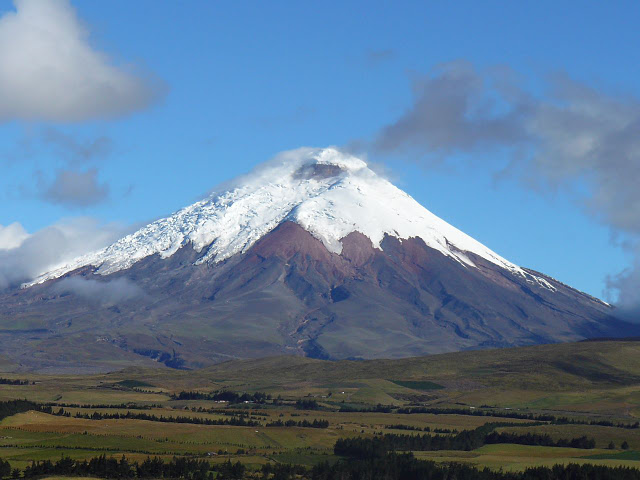 It is not active and you can go all the to the top. I know people who did this themselves but it is recommended to do it with a tour.

Most people however just drive up to a parking lot and then walk about an hour to a mountain refuge. From there it is another 30 minutes to the glacier where you can spend some time and then descent again.

Going to the top requires equipment which is provided by the tour operator.

The photo above was taken from the Secret Garden hostel nearby which for me was a great base to go to Cotopaxi. You can also do this as a day trip from Quito.

If you want to do this all by yourself, you can take local buses and then walk the last 15 km or so, this may be tricky unless you find out exactly where to go.

Cotopaxi is in a national park and I think there was an entrance fee, but you don't need a permit.

A very different volcano is Quilotoa, a few hours south of Cotopaxi: 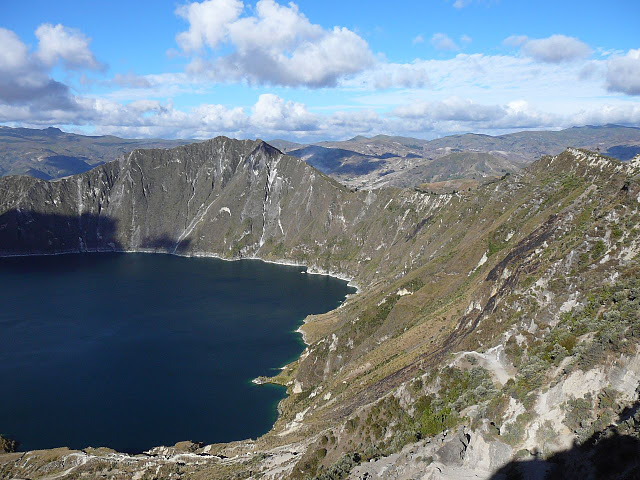 Here you can walk all around the rim of the volcano and also down to the crater lake. You should take a whole day for this but you can stay in a guest house in a small village on the rim itself. The hike can be a bit dangerous at times, be careful.

To get there take a bus to the town of Zumbagua, and then a taxi to Quilotoa for a dollar.

I'll give a late answer for those who may want an alternate or to visit the tallest mountain or volcano on earth and get closer to space than any terra firma on the planet. Ok so Cotopaxi is a great answer, no doubt! It is beautiful and close to Quito. Actually many people do not realize if you get up with the sunrise in Quito and get high enough you can often get a beautiful view of Cotopaxi before the clouds roll in. Imagine this, viewing an ice glacier while on the Equator! Just awesome. Just to correct Peter's answer though it IS active. Actually very active. It has spewed Ash and rumbled while I was their in 2015 and it is actually an explosive volcano. Anyay it is awesome but it has one major downfall. It is too close to the capital city and the mountain and the area are just too overcrowded for me.

My advice, head to Chimborazo. Now check out this awesome fact. It is the tallest mountain on earth if you measure from the center of the earth as opposed to MSL.

Chimborazo is not the highest mountain by elevation above sea level, but its location along the equatorial bulge makes its summit the farthest point on the Earth's surface from the Earth's center (Wikipedia). Chimborazo, at it’s peak, is the furthest point from the center of the Earth. Our planet bulges at the equator, making Mount Chimborazo even futher out there than Everest. It has the distinction of being the closest point to the sun on the planet, and yet still the coldest place in Ecuador (http://xtremesport4u.com/extreme-land-sports/a-little-more-on-mount-chimborazo-ecuador/).

Now this is not some crazy claim. GPS now measures the x,y coordinate as an angular measure of unit from the center of the earth but for some reason elevation (z) has remained at the rather arbitrary and changing MSL. Geologists agree it is the highest mountain from the center of the earth. Indeed, as we have switched from surface datums to earth-centered datums it now makes far more sense to list Chimborazo as earth's highest mountain.

So we take latitude (y) and longitude (x) from the center of the earth but not elevation (z)!!! 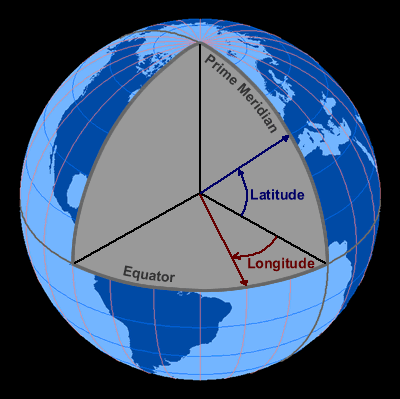 It is very quiet, and you will only see a few people. No tour groups, no tourists, and just you and the mountain.

This is a series of pictures I took on my last trip. 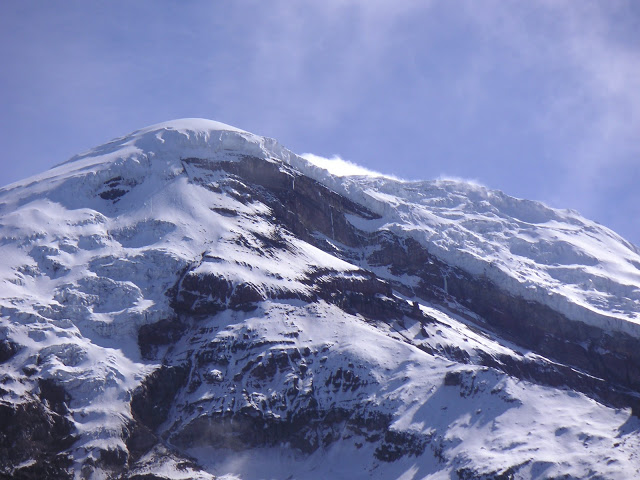 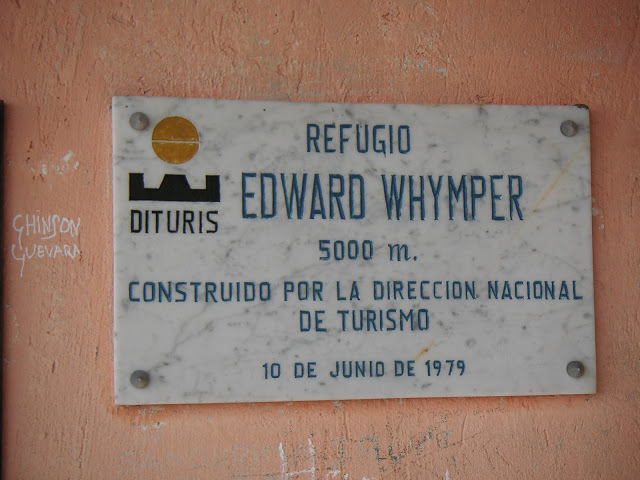 Markers for those dead on the mountain. 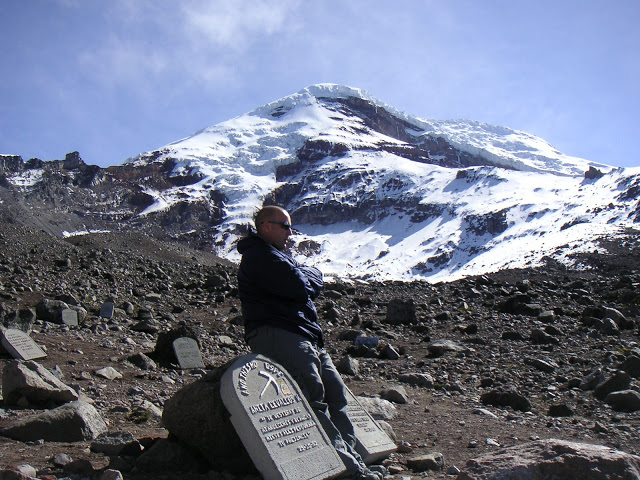 The Drive up with the mountain and the Llama or is it an Alpaca , I can never tell... 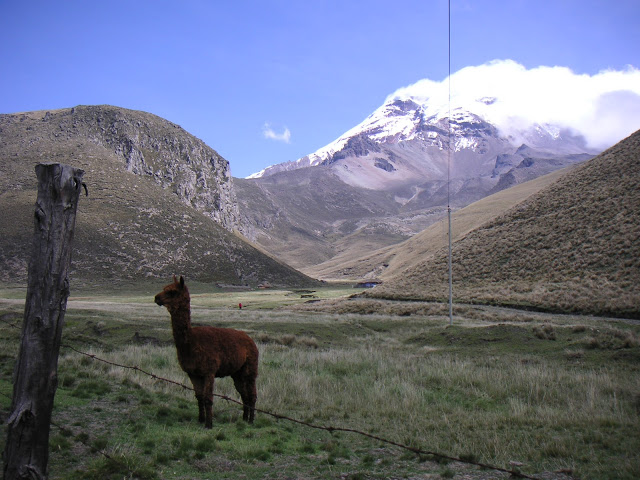 Go south from Quito on the Pan American Highway. ~ 4 hours by car and 5 by bus. Pass the town of Amabato and it is the huge snowy mountain on your right. As you drive into the park a truck may chase you down. Do not be afraid they want $$$$. It is the park entrance fee. They do not have a building as so few people come they just drive around.

that Chimborazo was one of the most extreme journey’s he’s ever been on – and he has done some incredible things, so it is a mountain worthy of a challenge, but also a mountain which can exact it’s revenge on you – so please beware if you are thinking of summiting it. http://xtremesport4u.com/extreme-land-sports/a-little-more-on-mount-chimborazo-ecuador/

Stay around here and you may never see another non-Andean once off the main road. This place is very quiet. Yes it is a Volcano. I think that answer your list of questions.

Not the answer you're looking for? Browse other questions tagged destinations tours ecuador volcanoes or ask your own question.

24
Where can someone see flowing lava at roughly Easter time?

17
Where can I eat a guinea pig in Ecuador?
15
Vaccinations and medicines for Peru and Ecuador
9
Can I visit vineyards in Stellenbosch without booking a tour in advance?
8
The Esplanade in Singapore: Are there any tourist tours?
8
How to visit the Pantanal (Brazil) without a multi-day tour?
4
What are the recommended concentration camp tours near Berlin?
35
Can you tell me how to get to Sesame Street?
15
Expert-guided tour of an offshore wind farm in or near the North Sea?
5
What does "with transfer" mean in the context of guided tours?