Can I refuse to pay auto-gratuity in a restaurant?

I got the following receipt at some restaurant in the USA:

Can I refuse to pay auto-gratuity, or pay a lower percentage of gratuity, given that it wasn't mentioned on the menu and no restaurant employee told me about it?

I know that laws in the USA can be state-dependent: I am mostly interested in Massachusetts and California.

To answer the actual question, in general if the 'gratuity" is actually stated on the menu, then yes, you can be obligated to pay it. You might be able to find a lawyer who can wriggle out of it, but not at a cost less than the gratuity. There have been (extremely rare) incidents where the police have been called over refusals to pay a gratuity.

If the tip wasn't explicitly mentioned on the menu (or if you don't remember it being mentioned) then you should absolutely query it. Some places have been known to add a strictly optional tip making it look as if it was part of the bill. At least ask if paying the tip is compulsory.

18% is considered a normal tip. However if you think the service was not up to standard, you should absolutely talk to the restaurant about getting it reduced. They are going to be much more amenable to you explaining about the late food, or the wrong order, or failure to refill drinks than if you simply refusing to pay. Asking for it to be reduced will often work, because most restaurants want happy repeat customers more than they want a few dollars in tip.

Auto-gratuities are found in places where they find tipping is not being done to the restaurant's expectations. Tourist areas do it, but auto-gratuities for large groups are common if they don't believe those groups can work out tips for themselves.

Other than that, this sort of thing is just a cost of doing business in North America.

Interesting comments about Bandar Persian Restaurant on the net (including a claim that a tip was added to the bill after signing it with no tip), but nothing about adding auto-tips to small parties. It's a pretty common practice with larger parties (6, or sometimes less) but it's normally noted on the menu. I could see them wanting to do it if there's a coupon or some other kind of promotional thing going on, since the servers do just as much work for a discounted dinner as for a full-price dinner.

I wonder if this is a phenomenon that is most prevalent in very touristy areas (Gaslight in SD or NYC). 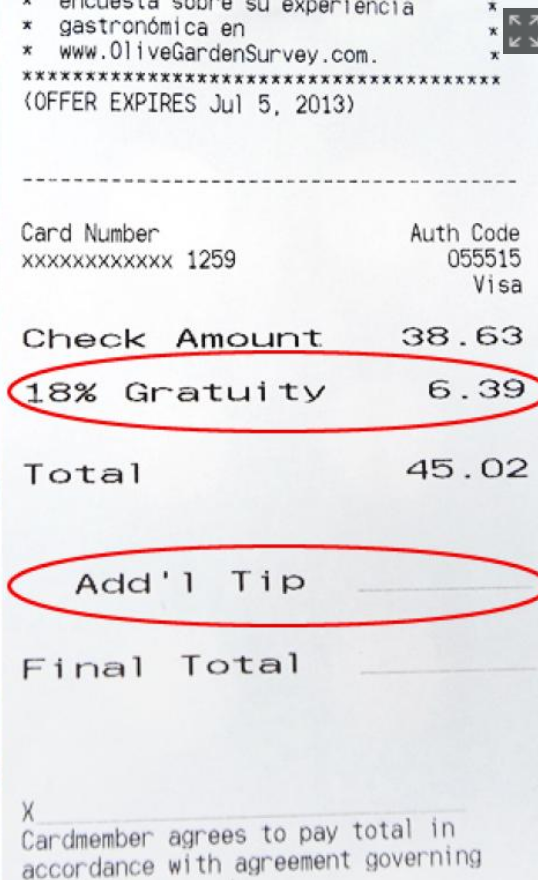 If you really felt it was improper, you could probably have asked them to take it off the bill. If it's not shown on the menu, I doubt you're legally responsible. If they disagreed you could have paid cash for the amount you did agree to (as shown on the menu) and have left (and never to return, from what servers have told me happens to the food of customers who stiff them..). Personally, I'd simply cough up the money (the full amount they asked for) and vote with my feet, unless I thought it was an error of some kind.

Epilogue: Sadly for the above-mentioned scruffy Mr. Dimond, his $5.5 billion (!) class-action lawsuit has been dismissed.

The judge cited in particular the fact that the auto-tip was conspicuously noted on the menu and that Mr. Dimond's suit had technical difficulties. The applicable laws (specific to New York City) are listed in this legal firm's 'Labor & Employment Alert'.

Just to add some perspective to those who have never worked in the service industry.

Many servers are working for less than minimum wage. This is in part that servers end up making tips. Mind you, they often have to tip out to the bartender who makes drinks, as well as the kitchen.

This means a $100.00 bill for your meal/drinks, ends up requiring that server to give a percentage (most cases it’s 5%-10% depending on support staff, in large restaurants with many support staff it’s almost always 10%) of that cost to the kitchen, busters, expedite, and or bartender.

If you don’t tip 10% to that server, they have to pay out of pocket for each time you do not tip. Meaning that if you only tip 10% on your bill, they break even and make no tips, that being said, 18% actually ends up being only 8% on average in their pocket to take home.

The system is based of total sales of the night as well. So your $100.00 bill at the end of the night might seem minor to you; but if 10 tables rack up $100.00 each and you have no tips for each table, and you have to tip out %10 for each one. It adds up to them paying $100.00 out of their own pocket because of people neglecting and failing to understand the industry policies surrounding tipping.

I’ve been a server for 8 years and this has been well known to me since day one. As unfair as it seems for you to have to tip someone for service that you feel should be obliged. You need to understand that it’s also because of unfair industry standards that we as servers have little control over.

It’s painful to see people who give praise about my level of service, refuse to tip even the bare minimum, and cost me my own money out of pocket for simply doing my job.

If you can’t afford to properly tip a server/bartender, then you should really take a second to ask if you can afford to be dining out/out drinking the first place.

The only people I have ever seen religiously tip servers on or above standard, are those who have been, or are currently in the industry.

This isn’t an insult to us (servers) from those with frustrations on the personal cost to them (the consumer) when it comes to tipping policy.

This is an honest piece of insight to the harsh realities of the people working the industry; that literally waits on you hand and foot; cleans up not only the glasses and plates from your table; but also the spilled drinks, puke, blood, piss; and sometimes, even shit from the floor; who is also legally responsible for your personal health and safety regardless of how irresponsible you behave and what little regard you may have for yourself.

Here’s a tip from a career server to all customers. You can afford to stay home if you have a problem with feeling obligated to tip us. We can’t.

That server who smiled to you and still said “thanks for coming in, get home safe.” Despite loosing money on serving you.

This is done is mostly in places where tourists are found. Restaurants usually do this because tourists for the most part don't tip correctly, or don't understand the concept of tipping. Imagine working a 12 top of foreigners and when it's time to pay, they cover the bill in the hundreds and add a dollar or two with added loose change from their pocket and expect it to be extremely generous. This would cause employees to seek employment in other location far from the tourists which would lead to a high turnover rate. So restuarants who would like to keep employees, add 18%. This is the cost of doing business here in North America. Don't like it, then go to a grab and go place and serve yourself.

Not the answer you're looking for? Browse other questions tagged usa legal restaurants tipping or ask your own question.

4
Is tipping mandatory at restaurants in Canada?

15
What is the correct way to pay in a restaurant when you get the check in a book?
29
Any trouble at Florida customs for not paying a California speeding ticket from 5 years ago?
16
Is it rude to pay tips in Iran?
117
How can I find restaurants in the USA where tipping is not expected?
17
Can person take a toothpick from a restaurant in Japan?
46
What additional costs can I expect when visiting a restaurant in the US where service is included?
2
Is tipping customary in London in a restaurant?
6
Is it appropriate for a cruise ship beer dispenser to charge gratuity/tip?
4
Can customers really request a return of restaurant food in the USA?