Getting around on Kyushu (Fukuoka, Nagasaki and Beppu)

We are thinking about taking shinkansen to Fukuoka and then visit Nagasaki and Beppu (possibly some place in the mountains as well) and probably stay a night or two in both places. Then back to Fukuoka and the ferry to Korea. 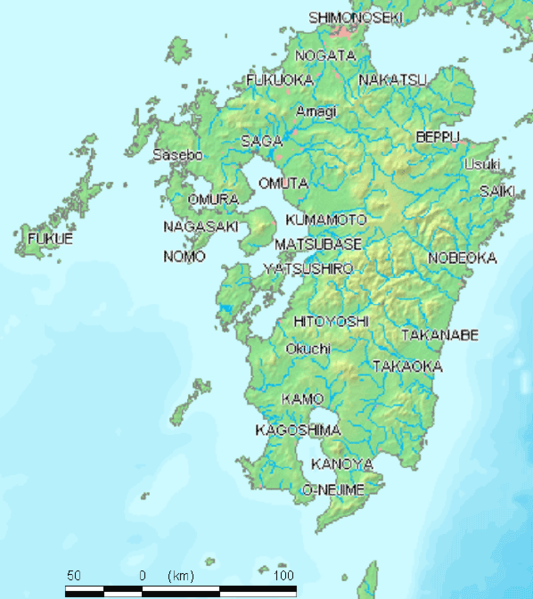 We are 4 persons. Is it best to rent a car or use trains? It is probably cheaper to rent a car but is it more convenient? Will we lose or gain time? What are the traffic like?

I've not been, but everything I've been taught or read or heard about about Japan says that public transport is the way to go.

The train is the transport mode of choice on Kyushu. The Kyushu Shinkansen zips across from Fukuoka (Hakata) via Kumamoto to Kagoshima in 1:20, and a spur line to Nagasaki is under construction. Ordinary train lines are slower, but can be interesting in other ways: the JR Hisatsu Line (肥薩線) from Kumamoto via Yatsushiro to Hayato (near Kagoshima) is considered one of the most scenic in Japan, with sightseeing trains and, on Fridays, weekends and holidays, even a steam locomotive running part of the way.

The Kyushu Rail Pass, available only to visitors on tourist visas, offers unlimited travel on JR Kyushu's lines, including the Kyushu Shinkansen but not the San'yo Shinkansen to Hakata. As of 2009, the pass costs ¥16,000 for five days, or ¥7,000 for 3-day version limited to northern Kyushu only. you'll have to travel quite a lot to make this pay off and most visitors, especially those not flying in directly to Kyushu, will find the ordinary Japan Rail Pass a better deal.

As for the cities:

I traveled to these three cities a few years ago and did all traveling by public transport. Public transport in Japan is excellent in general, and is also excellent between these cities, and in the cities themselves. Even the city buses in Bepu are very doable, if you don't understand something you can ask people and they will always try to help you, although language is a bit of a problem. Nagasaki has an excellent tram line system and Fukuoka an excellent subway system, so transport there is very easy.

I also went to Mount Aso by train and bus from Bepu, which you can easily do as a day trip.

So in short, I would recommend public transport!

44
Car rental vs. buying a car for 1 month, when visiting the USA?
17
Renting a car in Ireland & Great Britain: 1 rental or 2?
9
Do any of the ferries between Korea and Japan charge per car and not per person in a car?
5
Ferry from Motobu, Okinawa to Kagoshima, Kyushu?
3
Is a Kyushu itinerary with Japan Rail Pass + Car Rental cheaper/more convenient?
0
Staying in Manhattan, wanting a hire/rental car for afterwards, how to work out my best place to collect it from?
5
Where do I pick up an Enterprise rental car at EWR?
5
What can I do to get train tickets for fast trains in Japan cheaper?
15
Is it necessary to pay extra for navigation when renting a car in the US?
7
Where on Kyushu island can I get a view of a launch from Tanegashima Space Center?