How can I discover what time of the year hotels will be cheapest for a given city, e.g. Tokyo?

I'm interested in visiting Tokyo in 2015, and am trying to figure out what time(s) of the year will likely be cheapest for hotel stays, since it is a notoriously expensive city. Short of using a hotel search such as hotels.com, and laboriously going through each week/month of the year, is there a quicker way? Assume I want to constrain it to hotels of at least a reasonable luxury level (3*+). I'd like to base this on actual costs from a search engine as if I were to book now, not simply past observations from a guidebook (which typically only take in account the time for the booking, but not the time at which the booking is made - for example, staying in January may be generally cheap, but if I book now, in December, it probably won't be).

More generally, is there a way to search in this way for any city/area worldwide?

Note: Yes, I know that airline tickets will vary in cost too - I'm spending airmiles, so assume for the purposes of this question that this and other costs stay constant.

Hotel pricing in Japan is generally highly seasonal, and many hotels go so far as to publish a "room rate calendar" (客室料金カレンダー) that shows exactly how prices vary through the year. Disney has a nice, clear text-based one, but I'll use this rather more typical image from the Resonate chain in Kyushu to illustrate: 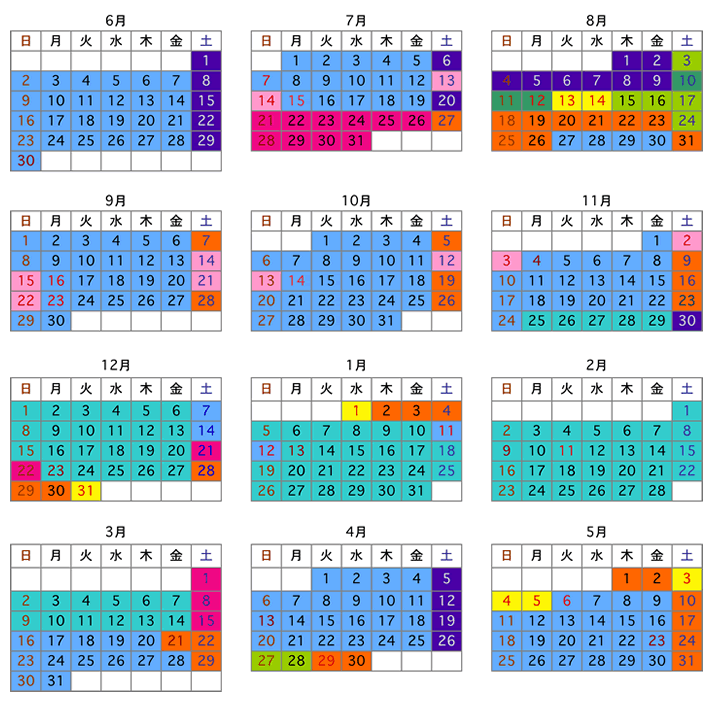 To parse that, 月 means month (6月 = June, 7月 = July, etc), and prices are ranked by color so that yellow (priciest) > green > light pink > orange > dark blue > dark pink > light blue > cyan (cheapest); and no, that order doesn't make a whole lot of sense. (Adding in letter codes, eg. A to E, is pretty common too.) A few trends are clear:

This is, I'd posit, the "standard" pricing pattern for hotels and ryokan in tourist-heavy destinations. Business hotels often reverse this to some extent, with cheaper weekend deals. There can be significant deviations from the norm though:

There isn't much seasonal variation for the very cheapest class of hotels in Japan -- the business hotels, cheap ryokans, and capsule hotels. The rooms tend to be fixed price and when they sell out, they sell out.

Look at hotel networks such as Toyoko Inn, Route-Inn, Super Hotel, etc. Unfortunately, most of these are designed for domestic customers only -- the websites are only in Japanese, they don't book through resellers (like Hotels.com or Orbitz), and the front desk only speak Japanese.

Not the answer you're looking for? Browse other questions tagged budget online-resources japan hotels tokyo or ask your own question.

5
How Much Could You Expect Accommodations to be Pricewise in Japan?
0
What is the best time to make a hotel reservation?

7
Finding a quiet hotel in Madrid
8
Website to identify low season for hotels
21
How can I tell hotels exist that aren't on the booking web sites?
2
Choosing a vacation location based on climate at a given time of the year
9
Is there an hotel price search engine that also searches nearby cities?
11
Is there a website that lets you shop for hotels with taxes and fees included in search results?
6
Booking a “12 hour use” hotel room at the Incheon Airport Transit Hotel
2
Is there a hotel booking website that lets you filter by a highlighted map area?