The boys of the NYPD choir, singing Galway Bay?

Suppose I'm in New York City around Christmas time. Is it possible to see something similar to what is described in the famous Pogues song Fairytale of New York (video - lyrics):

The boys of the NYPD choir were singing "Galway Bay"

And the bells were ringing out for Christmas day

Not necessarily exactly this, but something similar: some sort of iconic festive public performances of traditional songs, ideally by some sort of NYC institution?

Searches on "NYPD choir" just find references to the song, and sadly according to Wikipedia, when the video for the song was made, there was no NYPD choir (the closest they could find was the NYPD Pipes and Drums, who didn't know Galway Bay, and were singing a song about Mickey Mouse...) 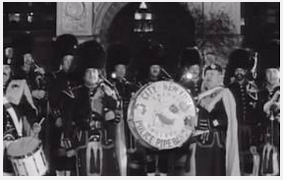 ...but maybe things have changed, or, maybe there's some similar NYC institution who do similar public performances of similar classic old songs that could evoke a similar atmosphere?

The NYPD does not have a Choir. MacGowan wrote the song having never actually been to New York.

For the production of the music video, the NYPD Pipe and Drum Band was hired instead, and they sang the only song they all knew; the Mickey Mouse Club Anthem.

The Pipe and Drum band primarily plays at police-related functions, including funerals and fundraisers. As far as I know, 'Galway Bay' is not part of their repertoire, as they specialize in traditional Irish and Scottish folk music. The most reliable place to see them play would be during one of the cities major holiday parades - especially those of interest to the Irish-American community, such as the Saint Patrick's Day Parade every March.

Not the answer you're looking for? Browse other questions tagged new-york-city music or ask your own question.

14
Throat singing lessons in Mongolia
5
Can you walk across the Queensboro bridge to Roosevelt Island?
4
Seeing The Late Show with Stephen Colbert
6
Where do the singers sing on the Macy's Thanksgiving Day Parade route?
17
Can I climb up the One World Trade Center by stairs?
5
Is the Tiffany yellow diamond on display?
5
Can I get a UK Standard Visitor Visa at the border?
2
Who is performing the music played on the loudspeakers at Santuario del Cerro San Cristobal, Santiago, Chile?
20
How to find the locations of Europe's largest pipe organs?