Is Amsterdam a dog friendly city?

Are there many places in Amsterdam that would be happy for us to bring a dog in (cafes, restaurants, public buildings)?

What is the general attitude to dogs in public places in the Netherlands?

By default, if you don't see a 'no dog' sticker, your dog will be allowed into restaurants. Dogs are not allowed in any of the major museums or churches but are allowed pretty much everywhere else. (source).

How Amsterdam is a dog friendly city.

It might be these 'no dog' signs Mayo mentioned are well hidden then, because I know a lot of restaurants in Amsterdam that definitely would not be fine with you going in there with a dog, but I have rarely seen signs being put up that you shouldn't enter with a dog (though I have seen a couple). Either way, as far as restaurants go: on the terrace dogs tend to be allowed, inside you should look for a sign first and otherwise just ask, but whenever it's even remotely busy; expect a no.

To be clear here, I am disputing that the default is that they are welcome, because in any other building the default is that they are not welcome (except if you're blind of course). You should not try to enter shops, museums or any other building with limited space with a dog (train stations or shopping malls for example tend to be fine of course).

As stated by Mayo it's true that dogs are welcome in all public transport in the Netherlands, although some restrictions apply. For example with the buses of one of the two major companies the dog has to be on a short leash and not be of any hindrance to other travellers (in other words, you may be denied access if you have a big dog, or told to exit the bus if he starts barking a lot) (Source) or with trams if he takes in the spot for a seat you are expected to buy a ticket for him (Source: 4.1)

Beyond that mid-level hotels as far as I know do cater often for dogs, however both cheap hostels and expensive hotels do not tend to allow them (though like in most major cities exceptions can be found).

Come on.. In Amsterdam you have some hotels where you can go with a dog, IBIS for example.. I saw many times dogs inside shops, cafes, restaurants.. Camping parks are also pet friendly.. fell free to come with your pet to Amsterdam. I have 2 dogs and I go with them everywhere.. I never paid a dog train ticket for example.. In short, Amsterdam is a pet friendly city!

Compared to the UK and the USA dogs are more often accepted but not all the time.
In trains they travel for free if they travel in a bag you can carry, so big dogs have to have a 'dog' ticket. All dogs can sit on train seats when there are available as long as the seat is covered before the dog gets on. Sitting under the seat is more appreciated though.

You will find 'no dogs allowed' stickers on shops when they sell raw meats and/or fish, and on some more, as they are required by law not to allow dogs. Restaurants do not have that restriction in the dining room but owners might restrict dogs or might allow them.

In the UK I have seen stickers 'no dogs allowed except for guide dogs', those stickers I have never seen in the Netherlands, guide dogs and other help dogs are always allowed as matter of fact, unless there are animals roaming free and even then it might be allowed.

Amsterdam is a closely build city and there are quite a few streets with no green at all, but it will never be far to walk to a space where your dog can find a place for whatever it needs to do. But you will have to clean up afterwards.
The parks in the city all have signs telling you what your dog is allowed to do there and quite often they will have 'dogs free to run' fields.

I am Dutch, used to have a dog and have noticed the differences while traveling in the UK and other places.

Short answer: Yes, but you need to consider those that don't like dogs.

Holland in general is very very pet friendly. It is also the only country in the world that has a political party aimed at improving animal wellbeing, who actually have seats in parliament. The positive attitude towards pets sometimes goes as far as pet being welcomed, whereas small children are less accepted.

So in general I think it is safe to say that you will have no problem with your dog in Amsterdam.

Having said that it still makes sense to use common sense. Fancy places are maybe not so appropriate to bring your dog. Amsterdam also have people like me, who think that animals are awesome as long as they are in a more natural habitat (i.e. garden). 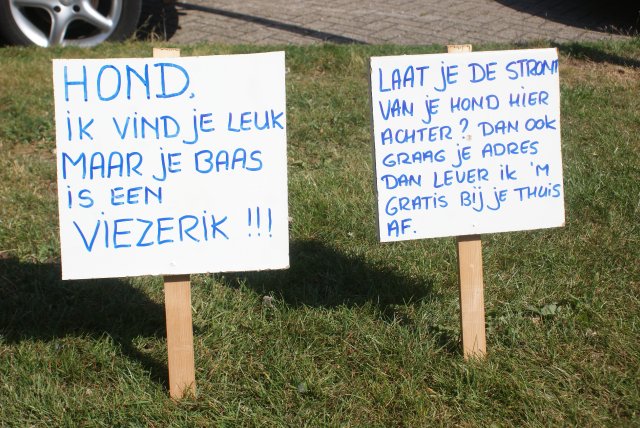 Be aware that there is one type of behaviour of dog owners and that is that they don't clean after their dog. You sometimes will see messeages like the one above stating the annoyance towards dog faeces in the public space. The boards state: "DOG I like you, but your boss is a pervert" and "If you leave your dog sh*(, please also leave your address, so I could deliver your sh(* for free". As a dog owner in the Netherlands you are supposed to bring plastic bags along to clean after your dog. 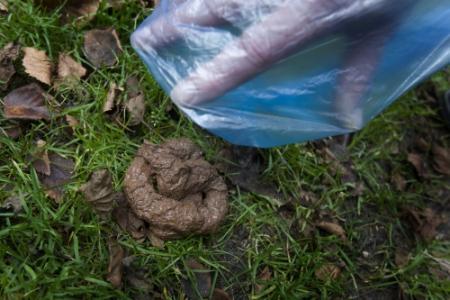 So if you are a responsible dog owner and you bring your doggy bags, you are set for an awesome time with your dog in Amsterdam.

Regarding restaurants it is complicated. If it is just a daily snack place, people bring their dog. Less casual restaurants don't allow dogs. However, I expect it to be the same in the UK. So you could easily apply your normal behavior.

As a Brit who lived in Ams for 3 years with my dog I would say Amsterdam is in general extremely dog friendly. Approximately 30-50% of all the restaurants I went to over those years would allow us inside (with a 30kg very well behaved and cute Bulldog), most of the cafes and almost all the bars. Shops too other than food stores also mostly happy.

One of Austin's favourite spots was the top floor food hall at die Bijenkorf after a wander through the whole place. All the high end stores on PC Hoofstraat were happy to see us and of course the local ones including places such as the chocolate shop on Staalstraat. I could go on and on....more accomodating overall than London for sure, where the parks (and pubs) are great but restaurants and retail not so much (special shout out to Liberty for welcoming you and your four legged pal).

Paris is great for eating and shopping but pretty lousy for parks in the centre, so in some ways Amsterdam where the parks too are very good has the best overall doggy experience of all. Or at least had, if it has become less dog friendly in the past 5 years I'd say that's very unfortunate. The only downside is that Dutch thing of allowing "dogs to be dogs" which seemed to mean a fair few a little out of control and a little aggro.

Not the answer you're looking for? Browse other questions tagged netherlands amsterdam pets or ask your own question.

6
Best solution for flying with a big dog?
5
Dog passport in EU, Vet on way back?
3
Quiet cities close to Brussels and Amsterdam
10
Are dogs permitted on trains in Netherlands?
15
What areas to avoid in Amsterdam for a family-friendly visit
2
From Heathrowstraat to central Amsterdam
1
What is Amsterdam city center and transportation from there to Leiden?
16
Is it possible to accompany a live animal (dog) during air travel (cargo)?