Top destinations in Southern Laos and how to get there from Cambodia? [closed]

Ask Question
Asked 9 years, 4 months ago
Active 8 years, 2 months ago
Viewed 768 times
8
Closed. This question is off-topic. It is not currently accepting answers.

I'm travelling in Cambodia and would like to Visit Laos for a portion of my trip. What are the top destinations in the southern region of Laos and what is the best way to get there from Cambodia? I understand that a lot is happening up in the northern part of Laos (capital city) but I'd like to hear what there is in the southern region bordering Cambodia because I do not want to spend days on a bus.

Well according to Wikitravel:

The nearest Cambodian town is Stung Treng, and the border is a 90-minute speedboat or bus ride away. Note that the border is lightly used, with almost no onward public transport available at the border (therefore book through transport from Stung Treng to Ban Nakasang for Si Phan Don/Don Det) and both customs officers and transport providers have a reputation of gouging foreigners, although this seems to have improved recently (currently both Cambodian and Laos border officials request US$1 stamp fee per country). Crossing the border (Oct 2010) the Cambodia officers will ask for US$1 for exit stamp.You can tell them you don't have any and they will still stamp it. On the Laos side they will demand $2 for entry stamp, if you refuse they will not stamp it, (you will need the stamp to get out), so you have no choice than to pay the bribe. Note if you cross the border by boat, you will have to return by road to the border checkpoint to officiate your arrival (ie. get your passport stamped) in Laos.

As for top destinations, that's something we try to avoid a bit - see the [faq], we don't want to do lists or subjective answers about what makes a destination a 'top' destination, but Wiki again points out that the Plain of Jars, Wat Phu, the three-layered gilded stupa of Pha That Luang (national symbol) and of course the natural wonders - the Mekong delta flatlands in the south.

I didn't get to travel to Laos because of travel (transportation onward from Stung Treng sounded iffy from reports I heard due to local flooding at the time) and unclear visa situation for Indian passport holders for visa-on-arrival at the border. Still, I gathered something from travellers who went there and back to Cambodia.

Laos is a tougher country to travel around in, at least when you decide to do so by public transport as it's even less organised compared to Cambodia, where it's just about barely there. You mentioned you'll be there for two weeks, which is a relatively tight schedule for travelling within Cambodia, going to Laos, and then back again. What this potentially means is that you won't have time to visit most of the places Mark mentioned in his answer - at least not if you're not willing to accept that you will be rushing from one town to another to fit everything. Typically, asking 'what to see' in a country would be too broad a question to answer, except that in your case due to time constraints and the transport situation in Laos, this actually does become an answerable question.

On crossing over from Cambodia's northern border, head over to Pakse and make it your hub onward bus connections are easiest from this place. As I mentioned in the other answer, for some weird reason regular bus services seem to exist between Pakse and Phnom Penh but not from Siem Reap or Stung Treng; bus services do exist, but there are not 'timetabled' regular bus services.

There are Buddhist monuments worth seeing in Pakse itself and further towns connected from Pakse are Champasak, Savannakhet, and Bolaven Plateau. The one place everyone raves about though - and one I've heard so many recommendations from other travellers - is Si Phan Don. Everyone says it's the perfect place to sit back and enjoy nature.

I liked the 4000 Islands (Si Phan Don) in the very South of Laos and did the relaxing and reading as Ankur is mentioning - not much more to do there. When I was in Pakse I rented a motobike and drove to the Bolaven Plateau for Coffee, local market and the Waterfall Tat Fan which is a 120m high twin-waterfall. 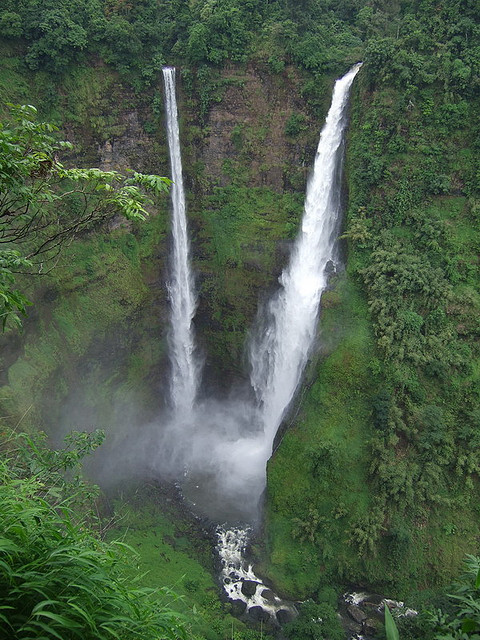 Not the answer you're looking for? Browse other questions tagged sightseeing southeast-asia cambodia laos or ask your own question.

11
Does a Canadian need a visa to pass from Cambodia into Laos and then back?
11
Recommended destinations located close to Siem Reap, Cambodia
10
Is it possible to go directly from Siem Reap to Vientiane over land?

11
Does a Canadian need a visa to pass from Cambodia into Laos and then back?
6
How to get to Siem Reap (Angkor Wat) from Pakse by land?
12
Travelling with a laptop
5
Are there guesthouses or cheap accommodation on the road between Vientiane and Savannakhet?
8
Cellphone service in Southeast Asia?
3
Indian travelling by road through Cambodia, Laos and Vietnam
4
How to get visas for Cambodia and Laos?